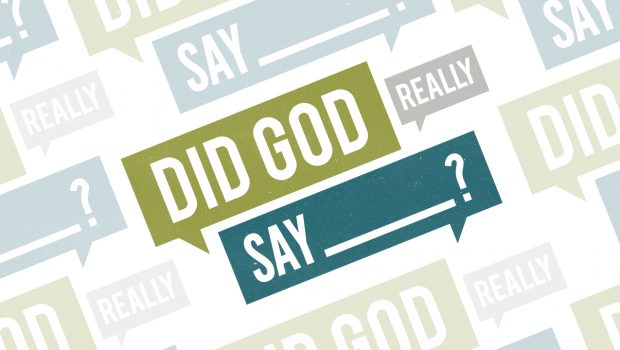 Questioning God’s word is nothing new.  It has been happening for thousands of years.  The first time we see it happen in the Bible is when a talking serpent (not exactly something that you see everyday) approaches Eve to tempt her in Genesis 3:1-5.

1 Now the serpent was more crafty than any other beast of the field that the LORD God had made. He said to the woman, “Did God actually say, ‘You shall not eat of any tree in the garden’?” 2 And the woman said to the serpent, “We may eat of the fruit of the trees in the garden, 3 but God said, ‘You shall not eat of the fruit of the tree that is in the midst of the garden, neither shall you touch it, lest you die.'” 4 But the serpent said to the woman, “You will not surely die. 5 For God knows that when you eat of it your eyes will be opened, and you will be like God, knowing good and evil” (Gen. 3:1-5, ESV).

In verse one we are introduced to “the serpent” and we learn a couple of interesting things about this character. First, he is the craftiest animal of all the animals that God had created. Second, we learn that this serpent talks. Immediately we are confronted with the fact that this serpent is not merely a serpent. We don’t know it from the immediate context but we learn from the wider context of the Bible as a whole that this serpent is Satan himself. In Revelation 12:9, the Apostle John refers to Satan as “that ancient serpent,” clearly connecting the person of Satan with the serpent that we encounter here in Genesis 3.

We learn from Scripture that Satan was once an angel whose heart became filled with pride resulting in him rebelling against God and leading a number of the other angels to rebel with him. Somewhere between Genesis 1 and Genesis 3, this rebellion in the supernatural realm takes place and these angels are casted out of heaven and Satan and the rest of his fallen angels (demons) begin to wreak havoc on God’s people. Satan wastes no time in his attempt to bring death into the physical realm through deception. That is Satan’s primary mission according to Jesus. In John 8:44, Jesus says that Satan “was a murderer from the beginning, and does not stand in the truth, because there is no truth in him. When he lies, he speaks out of his own character, for he is a liar and the father of lies.” Satan is a murderer and propagating lies – particularly lies about God and his word – are one of his deadliest weapons.

There are five things in verses one through five that Satan does here in his temptation of Eve:

1. Satan undermines Adam’s leadership.
In verse one we read, “He [Satan] said to the woman.” In Genesis 1-2, we see that the mantle of responsibility in the family is given to Adam. That isn’t because the man is better than the woman or smarter or more talented or more efficient. It is because of God’s design and plan for his people. God created man and woman to complement one another and in this unique relationship that God created called marriage, he has given men and women different roles and responsibilities. The man is to lovingly, humbly, and self-sacrificially lead his family. The wife is to walk alongside her husband under his leadership as his lifelong partner and helper. Satan intentionally defies and undermines these God-given roles and responsibilities and converses directly with Eve.

2. Satan casts doubt concerning the truthfulness of God’s word.
He begins his question with the phrase, “Did God actually say…” This is how every denial of Scripture happens, how every cult happens, how every false religion happens and essentially how our disobedience to God happens. There is a time and a place for our questions and for us to wrestle with doubt but be very careful of conversations with others or conversations that happen with yourself that begin with the question, “Did a God actually say?”

3. Satan twists and distorts God’s word.
After he begins his question by casting doubt about the truthfulness of God’s word, he finishes the question by asking, “Did God actually say, ‘You shall not eat of any tree in the garden’?” That’s absolutely not what God said! Satan intentionally misquotes God’s word here just as he did when he tempted Jesus in the wilderness during Jesus’ earthly ministry. Eve does correct Satan in verses two and three and tells him, “We may eat of the fruit of the trees in the garden, but God said, ‘You shall not eat of the fruit of the tree that is in the midst of the garden, neither shall you touch it, lest you die.'” Notice that she adds something to God’s command by saying that they cannot eat the fruit of the tree or touch it. There must have been some kind of miscommunication between Adam and his wife as the command was originally given to Adam.

4. Satan rejects and denies God’s word.
In verse four, after Eve corrected Satan and told him that the only tree that they could not eat from was the tree of the knowledge of good and evil, Satan said to Eve, “You shall not surely die.” It is just a flat out rejection and denial of what God explicitly said! Satan looks at Eve and says the exact opposite of what God said is true.

5. Satan casts doubt concerning Adam and Eve’s identity.
After rejecting and denying God’s word – explicitly calling God a liar – in verse five Satan tells Eve, “For God knows that when you eat of it your eyes will be opened, and you will be like God, knowing good and evil.” He tempts Eve to disobey God by telling her that when she does so she will become like God. Here is the irony of the situation: Adam and Eve were already like God. They were like God in the most perfect way; in the way that would bring God the most glory and his people the most joy. They were created in his image to reflect his glory and character and given dominion over creation as stewards of all that God had made. But Satan comes along and advises Eve to eat the forbidden fruit so that they will become like God, knowing good and evil. Satan is essentially attempting to convince them that God is withholding something good from them and he still attempts to persuade us that God withholds good things from us, which leads us to sin just like it led Adam and Eve to sin.

Thank God that he sent a serpent-crushing Savior; a Savior that would bruise Satan’s head while being bruised on our behalf (Gen. 3:15; Isa. 53:10).  Jesus has “[destroyed] the one who has the power of death, that is, the devil, and [delivered] all those who through fear of death were subject to lifelong slavery” (Heb. 2:14-15, ESV).  What a glorious Savior!