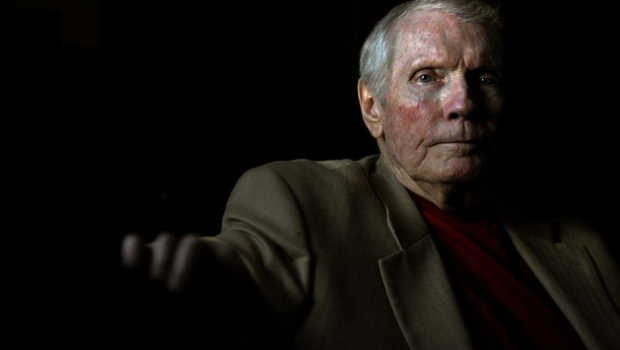 For Christians to have the the “at least I’m not as bad as Fred Phelps” attitude fail to understand man’s sin nature and radical depravity as a whole. Any of us could make Hitler look like a choir boy. The only thing that keeps us from being more evil than we are is the restraining hand of God.

Earlier today, Fred Phelps, the leader of the hate-mongering Westboro Baptist Church breathed his last breath at age 84.  His death has been a lightning rod invoking comments from all across the spectrum of Christians and unbelievers alike.  Though a lot of text has been spilled over the Internet, one aspect Christians need to keep in mind is how his sin of hatred and vileness towards fellow man and our “Christian” responses confirm the doctrine of radical depravity that many deny.

From birth, we are sinners (Psalm 51:5).  Our sin is inherited from Adam when he fell in the garden (1 Corinthians 15:22).  Other scriptures confirm our sinful state (Romans 3:10-17, 3:23).  If you ever question or doubt that we are born as sinners, look no further than a child.  We do not have to teach them to lie or strike at our face when they get angry.  Rather, it is just a preview of the sin each of us are capable of.  We at our core are sinner’s completely undeserving of any mercy.

Sadly, many responses from fellow Christians are heartbreaking to read with their equally vile tone.  Facebook and other social media pages are overflowing with celebratory remarks regarding Phelp’s death.  Christians who take this position would do well to recount Chapter 18 of Luke’s Gospel.  In Luke’s Gospel, we come upon a scene where Jesus is illustrating this very situation.  Jesus explains the Pharisee was praying, “God, I thank you that I am not like other men, extortioners, unjust, adulterers, or even like this tax collector. I fast twice a week; I give tithes of all that I get” (Luke 18:11-12).  Like many commenting on the Phelp’s story, this Pharisee is boasting of his own goodness, though he truly has none apart from Christ, and looking down on others, in particularly this tax collector.

Next we read the tax collector’s response and prayer, “But the tax collector, standing far off, would not even lift up his eyes to heaven, but beat his breast, saying, ‘God, be merciful to me, a sinner!’ (Luke 18:13).  What happens next gets right to the core as Jesus then flips the scene on its head as he proclaims, “I tell you, this man went down to his house justified, rather than the other. For everyone who exalts himself will be humbled, but the one who humbles himself will be exalted.” (Luke 18:14).

Cult leader Fred Phelps may very well be a glaring example of hate, prejudice, discrimination, etc.  And from what we have seen in his public life, there appears to be no signs of regeneration.  Yet, to point to Phelp’s sin and pronounce ourselves above reproach (read “exalts himself”, Luke 18:14) is doing the exact thing Christ speaks against!  Furthermore it denies the doctrine of radical depravity to the point of arrogance and a complete misunderstanding of the Gospel.  For Christians to have the the “at least I’m not as bad as Fred Phelps” attitude fail to understand man’s sin nature and radical depravity as a whole. Missed is the understanding that every one of us here on earth deserve God’s wrath! Any of us could make Hitler look like a choir boy. The only thing that keeps us from being more evil than we are is the restraining hand of God.

If anything it should cause Christians to be even more joyful that God would mercifully save such a wretch as us.  Amazing Grace, how sweet the sound!