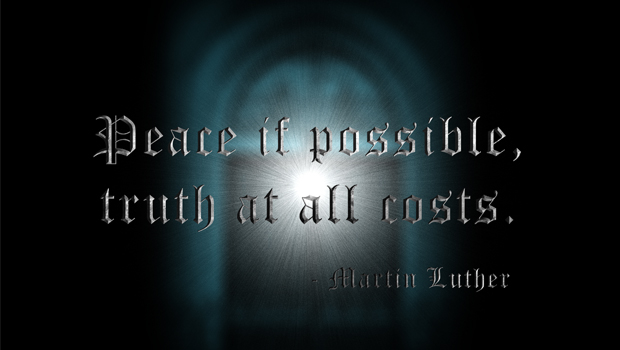 Peace If Possible, Truth At All Costs

The truth is too important to fear isolation.

Recently, a sister in Christ who I’ve known for some years and even attended church with (for many of those years) removed me from her social media page.  When I realized it, I just shrugged it off as another fellow believer to pray for that has been misled by sensationalized misconceptions of Scripture.  Yet, it wasn’t until I left work and saw my phone light up with text messages from her that I realized how rattled she was.  Or more accurately, how hard it is for some brethren to hear (and even consider) Biblical truth when it collides with what was thought to be truth.   Truly, when there’s mist in the pulpit, there’s fog in the pew.

The discussion, albeit brief, centered on the latest trendy buzz in the charismatic-charged evangelical landscape – “the blood moons“.  Ooooo.  Doesn’t that just send shivers up your spine.  Think of that scene with  Shenzi saying “Mufasa” in Disney’s The Lion King (video clip here).

The whole blood moon craze is fueled mostly by teachings from Pastor John Hagee.  He refers to the tinted color of the moons during eclipses and attempts to anchor them with Joel 2:31 and the recent occurrence of a tetrad.  A tetrad is a series of four consecutive lunar eclipses.  Though the Bible does not state anything about eclipses in the end times, to Hagee these blood moons are some sort of such a prophetic sign.  He goes on to make other incorrect claims such as Mark 13:24 indicates a simultaneous solar and lunar eclipse (which by the way is impossible).

Here’s the video that got me in “trouble”:

Where this mindset really turns tragic and absolutely dangerous is when it manifests itself with regards to the Gospel of Christ.

Now as you can see, it’s quick, to the point, and polite.  It simply holds these teachings up against Scripture that we as Christians are all called to do (Acts 17:11).  Yet despite the evidence presented, it still will be taken as “offensive” by those who have preconceived notions that were taught by a religious authority.

My initial response to her was simply (paraphrased) , “I just gave you some Biblical truth.  It’s up to you what you do with it…”  The conversation then turned borderline personal and accusatory simply because of the truth.

Now I will be the first to admit there is a wrong and a right way to convey the truth.  Have I ever been guilty in teaching a Biblical truth with a lack of grace? Absolutely.  Yet, when brought to my attention by godly men over me, repentance came quickly.  The difference is that Hagee and others refuse to recant when such poor teaching is brought to light.

The whole blood moon non-sense is just the tip of the iceberg that spotlights a bigger issue.  Rather, it shows how truth has become less and less important among the typical evangelical Christian today.  Where this mindset really turns tragic and absolutely dangerous is when it manifests itself with regards to the Gospel of Christ.

While some things may be secondary issues among Christians, there is no negotiation available regarding the truths of the Gospel of Christ.  Yet when a Joyce Meyer with a huge following (both in congregation and money) comes along and in heretical fashion teaches that “Jesus quit being the Son of God” (audio clip here) or that “Jesus was the first to be born again” (YouTube link here) or other heresies, an unbelievable number of Christians go along with it.  They believe such lies so much in fact that should you question it with Scripture, you are a closed-minded bigot and mean-spirited.

Being seen as mean and closed-minded is just the beginning.  As expected, she threw the Matthew 7:1 card at me.  After gently explaining its meaning in context, I continued to “confront” her with other truths such as those who preach are to call out bad teaching (Titus 1:9) and the fact that Jesus tells us to judge rightly (John 7:24).  You see when lies are taught long enough, people begin to believe them and lose the ability of discernment.

Like the title of this post from the great reformer Martin Luther, we should strive for peace if possible.  But the truth, well, it comes at all costs.  Whether it is our friends, families, or even fellow Christians, the truth is too important to fear isolation.