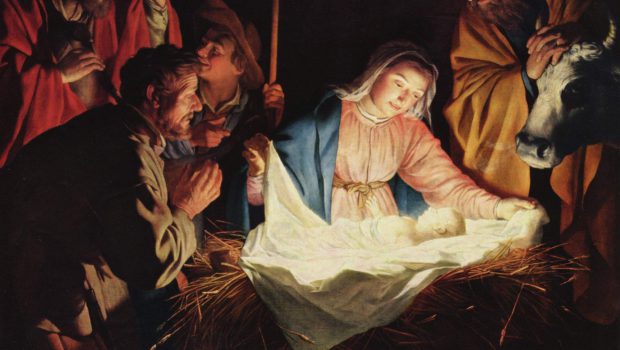 As someone who loves Biblical culture and understanding the Old and New Testaments in their cultural context, Christmas gets under my skin because, in my view, no other holiday or celebration reveals to me how culturally far off we are from the first century than Christmas. We don’t have any idea what that First Christmas really felt like. This series on the First Christmas will start with the shepherds, move to dates/times/locations and their significance, the magi and, at the end, attempt to wrap all of this up…pun intended. Throughout, my goal is to draw your attention to certain facts, some you may know and some you may not, for the purpose of getting you to feel the story rather than just know the story.

When God took the children of Israel into the Promised Land, he told them it would be a land flowing with milk and honey. This meant that this land would allow for the flourishing of two groups of people. The shepherds would be able to herd sheep and goats who in turn would supply milk. The farmers would be able to raise crops like figs and dates. There are two things described by the word “honey” in the text of Scripture. There is bee honey which we’re all familiar with and the kind of honey we see in the Samson story, and there is second kind which is probably better translated by the English word jam. It’s produced primarily from the figs and dates and fruit trees. This second type is the type mainly referred to in Scripture. God says the land He’s taking Israel to is so good, it’s flowing with milk and honey. In the mind of the original hearer, that means there’s a lot of room, enough for everyone to flourish; the farmer and the shepherd. 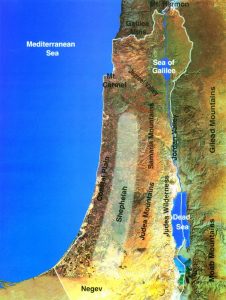 After the Israelites arrived in the Promised Land, they recognized the natural divisions in the land. Moving west from the Dead Sea you would cross the Judah Wilderness (where David flees from Saul & Absalom, where John the Baptizer is raised, and where Jesus was tempted), up the Judah Mountains (climbing from 1400 feet below sea level to about 3200 feet above sea level), down the other side to the foothills, or shephelah, arriving at the coastal plains bordering the Mediterranean Sea. There are a lot of geographical changes in a short amount of time.

Interestingly, each of those places were designated for someone to live and work. The pagans lived in the costal plains (e.g. the Philistines).  The farmers occupied the higher portions of the shephalah and the nomadic shepherds wandered the Judah Mountains and Wilderness. Bethlehem is an interesting location because it sits right on the border of farm country and shepherd country which is why you can have the story of David the shepherd boy and Ruth and Boaz on a farm in the same location. 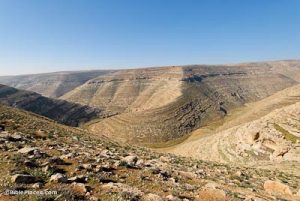 Shepherds were then and still are nomads. They wander the 15 miles of mountains and wilderness between Bethlehem and the Dead Sea. 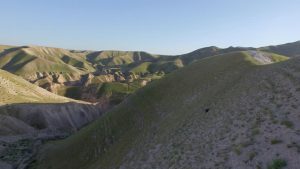 Shepherds are nomadic because they are in search of “green pastures.” Forget the image of fat lazy sheep sleeping in more grass than they could ever consume. The fields in Israel were for farming, so the shepherd country was the Judean wilderness. Therefore, it was the responsibility of the shepherd to lead the sheep where there was food enough to get them through and keep them alive. (Sidebar: Great teaching on this by Ray VanderLaan in this video)

Because shepherds are nomadic and away for long periods of time, they become ceremonially unclean and many neglect the Law of God, though there are exceptions. David used his time shepherding alone with his flock to meditate on and delight in the Law of God. 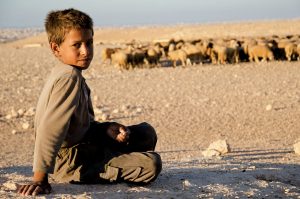 Lastly, shepherds, in this culture, if they are men, are sitting in the shade supervising. The actual work of shepherding is done almost without exception by little girls, little boys, young women, and old women. Early Christian and Jewish Cultural historian Ray VanderLaan, whose video I cited above, says, “I have never seen, in that bedouin culture, an adult male shepherding sheep.” In the days of the patriarchs, all of the people of Israel were shepherds. But even then, it wasn’t a noble or desired profession. It’s clear that the farming Egyptians hated the shepherding Israelites (Genesis 46:34). After Israel entered the promised land and began farming, shepherding became less desirable was handed down to young children, servants, and slaves. For instance, shepherding was done by David, the youngest of all Jesse’s sons (1 Sam. 16:11). King Saul’s flocks were watched, not by him, but by a servant from Edom (1 Sam. 21:7). Shepherds were undesired people in an undesired position.

The Jewish religious calendar that God established is based on agriculture. God’s holidays were marked by feasts because they coincided with harvests. The rainy season starts around beginning of November. It’s the first rain since April and it is what begins the agricultural year. When the early rains come, they soften the clay soil and after about 4 to 6 weeks of rain, the farmers wait for the fields to dry so they can be plowed. Plowing usually occurs in December. Then the seeds are planted, ideally, somewhere near the middle of December. The early rains taper off from mid-December to mid-January, so the farmers get their seed in the ground before the late rains come. The late rains last from mid-January into March and that’s when the harvest arrives. In mid-March to early April, barley, the first crop, ripens and can be seen breaking through the ground. This initial ripening becomes the basis for the religious calendar. 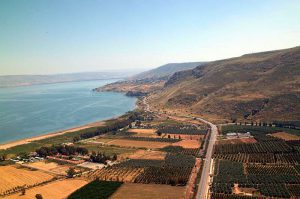 Think about the Jewish holidays in the Bible (Leviticus 23). The first holiday God instituted was Passover. Passover comes right as the barley begins to come to a head. Headed barley is what marks the beginning of the Passover month. The second holiday is Unleavened Bread.  This is the holiday where the people pray for their growing grains asking for God to give them bread out of the ground. The third is First Fruits. This is when they would bring the first barley heads to God. All these are associated with the barley harvest.

In June comes the wheat harvest. The holiday connected with the wheat harvest is Shavuot, better known as Pentecost (literally meaning 50 days). This is when the wheat is reaped, but also when God gave Moses the 10 Commandments. So, Shavuot is a celebration of both the wheat and the giving of the Law, of Torah. This gives even greater significance to Jesus’ teaching that “[m]an shall not live by bread alone, but on every word that comes from the mouth of God,” (Matthew 4:4). 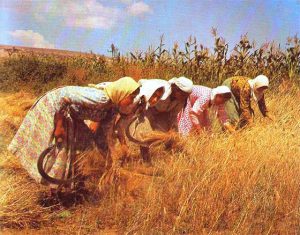 The requirements for most all these feasts are given a number of different places in the Old Testament. However, Leviticus 23 is the most exhaustive and when it comes to Shavuot, a command is included that none of the others versions contain. With regard to Shavuot, God gives Moses the specifics of the celebration (sacrifice, time of year, etc.) and all of that matches the other accounts. But, there is a somewhat strange requirement included in Leviticus 23:22.

“And when you reap the harvest of your land, you shall not reap your field right up to its edge, nor shall you gather the gleanings after your harvest. You shall leave them for the poor and for the sojourner: I am the Lord your God.” 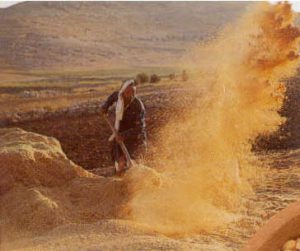 This was God’s welfare system. We know that it was adhered to by faithful Jews like Boaz and we know that the poor like Ruth took advantage. It was not a disgrace to be poor and go and cut the corners of the field. There’s no loss of dignity, but you have to do the work, so it isn’t a handout. Also notice that the verse doesn’t include a requirement for how much of the corner you had to leave. So, you could look out across the fields and know who was being obedient and generous. God gave these generosity and welfare system requirements along with the requirements for Shavuot because they need to be enacted during the time when everyone was harvesting. 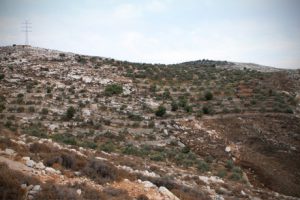 Ganim (gardens) on a Judean hillside

Sukkot (sometimes spelled Sukkoth) also known as the Feast of Booths (or Tabernacles), is a garden harvest holiday. A garden, or gan (GAHN) in Hebrew, usually produces grapes, figs, dates, or olives. A gan is different from a field. It’s a terraced plot built into the hillsides. Trees or bushes usually grow in gardens as opposed to the grains that grow in the fields. In the gan, grapes and olives are harvested in the fall. This usually happens in late September or early October.

Bethlehem is in a very unique geographical location. To the west, toward the shephelah, lie the gardens or ganim. To the east, toward the Dead Sea, lie the green pastures for the shepherds. In between the two is a very narrow strip about 4 to 5 miles wide on top of the ridge. This is where the fields are and this is where Bethlehem sits.

Along this ridge, the moment the harvest begins (late June or early July), the shepherds make their way back towards the fields and wait for an opportunity to let their sheep in. The farmers allow the flock to come in because the flocks eat everything that’s left over and leave deposits, both of which bless the farmer, and the nomadic shepherds get a place to live for a few months without traveling, so they’re blessed too. 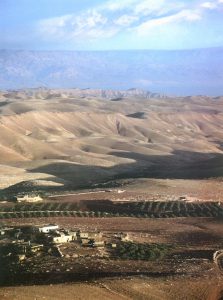 Bethlehem. Wilderness borders the fields to the east. Shepherds leave the wilderness for a chance to enter the fields.

This practice became an issue for the rabbis. God gave them a commandment not cut the corners of their fields. The sheep couldn’t come in the fields before the poor had an opportunity to glean. So the rabbis determined that two sabbaths was an appropriate amount of time to wait before the sheep could come into the fields. This is affirmed in the New Testament, though only the KJV retains the language. Luke 6:1 says, “And it came to pass on the second sabbath after the first…” This is when the Pharisees chastise Jesus for crushing grain in his hands on the Sabbath. And now we know exactly what time of year it was.

But what does all this have to do with Christmas?  In my next post, I’ll attempt to show you.