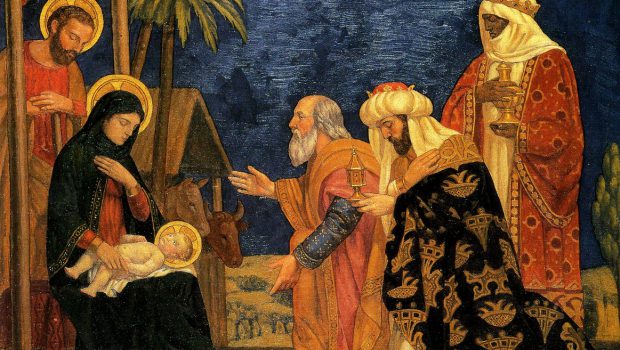 In this final installment, I’m going to address the visit of the magi and hopefully wrap all of this up make my point in a clear way.  First of all, this is the last post in this series so if you haven’t read the previous ones, read them here, here, and here.  Secondly, there is probably the most mystery surrounding this particular event, so some of this is going to be my speculation, but faithfully backed up by Scripture.

Let’s begin with definitions.  Matthew, in the second chapter of his Gospel, tells us that “wise men” (KJV, ESV) or “magi” (NASB, NIV) came to visit the Christ from “the east.”  Wise men is a translation of the Greek word magoi.  The NASB and NIV translators chose to use a word similar to the actual word rather than translating it.  As we’ve seen previously, translations into English aren’t always perfect and they can been poor at times.  So what does magi actually mean?  In ancient times, the Greeks and Persians had been at war for centuries, and the Persian priests, called magosh in Persian, came to be known as magoi in Greek.  Therefore, the ritual acts of Persian priests came to be known as mageia or magika.  Magic.  So, these men that come to see the baby Christ are not kings.  They are priests trained in some type of magical art.  Rather than thinking of them as “wise men,” think of Pharaoh’s court magicians (Exodus 7:11, 22; 8:7) or Nebuchadnezzar’s magicians, enchanters, and sorcerers (Daniel 2 & 4).  In other words, a group of pagan Satanic/demon worshipers (of undisclosed size) came to visit and bring gifts to Jesus.  Since they came from the east, they were most likely Zoroastrian priests or court magicians.

Matthew also mentions that these men come from “the east.”  This likely means they came from the deserts to the east of the Dead Sea, which is why Matthew calls them magi.  But can we get any more specific?  Personally, I believe there is evidence that these men traveled from Sheba.  I’ll get to that in a second.  Those visitors also bring gifts.  While many people have written about the specific meaning of each of those gifts, I believe it to be much simpler.  In that culture, spices, oils, and precious metals were the equivalent of large amounts of money and it wasn’t uncommon for kings from other territories to send a courier with this type of gift at the birth of a king as a symbol of peace, charity, and goodwill.  These priests were bringing these gifts, worth a lot of money, as a gesture of peace but also as a recognition of Jesus’ kingship.  How did they know Jesus was born and that he was a king?

In Numbers, the prophet Balaam is paid by King Balak of Moab to prophesy against his enemy Israel.  Instead, Balaam gives four oracles or prophecies about how great Israel will become and how her enemies will be destroyed.  This is epitomized in his final oracle in chapter 24 verses 15 through 18.

And he took up his discourse and said, “The oracle of Balaam the son of Beor, the oracle of the man whose eye is opened, the oracle of him who hears the words of God, and knows the knowledge of the Most High, who sees the vision of the Almighty, falling down with his eyes uncovered: I see him, but not now; I behold him, but not near: a star shall come out of Jacob, and a scepter shall rise out of Israel; it shall crush the forehead of Moab and break down all the sons of Sheth. Edom shall be dispossessed” (Numbers 24:15-18a ESV)

Balaam says that a scepter, the staff of a king symbolizing his rule, will rise out of Israel and it will be signified by…a star.  And that king will crush Israel’s enemies.  It wouldn’t surprise me if that oracle passed through all the known world to the east of Israel and made it’s way to Sheba.  So what did these Zoroastrian priests do?  They were already studied in reading the stars and so they watched the sky to know when Israel’s king was born.  Once it rises, they journey to Jerusalem and inquire to King Herod where the King of the Jews is to be born because they want to offer gifts to him, because they know what he does to his enemies.  Matthew tells us that Herod is worried by this news.  Not only because he is king, but because he is a descendant of Edom…and “Edom will be dispossessed.”  So Herod takes measures into his own hands.  He attempts to mislead the magi and subsequently slaughters all the male children in Bethlehem.

Not only is Balaam’s prophecy about the king rising out of Israel relevant to the Christmas narrative, but there are a number of texts pointing to a coronation event like that of the First Christmas. Sheba is in modern day Yemen

Psalm 72 is about the goodness and expansive reign of God’s King.  It could be that Solomon was speaking of himself when writing this, or he could be writing of a future king whose reign would never end.  I prefer the latter for a few reasons.  Read the whole psalm, but look specifically at verses 10-11 and 15.

“May the kings of Tarshish and of the coastlands render him tribute; may the kings of Sheba and Seba bring gifts! May all kings fall down before him, all nations serve him!

Isaiah 60 is often quoted around Christmastime and is even sung during Handel’s Messiah.  Read the whole chapter but look specifically at verses 4-6.

“Lift up your eyes all around, and see; they all gather together, they come to you… Then you shall see and be radiant; your heart shall thrill and exult, because the abundance of the sea shall be turned to you, the wealth of the nations shall come to you. A multitude of camels shall cover you, the young camels of Midian and Ephah; all those from Sheba shall come. They shall bring gold and frankincense, and shall bring good news, the praises of the LORD.” (Isaiah 60:4-6 ESV)

I don’t believe it’s ironic that Sheba is mentioned twice and the gifts brought to Jesus are mentioned twice.  I believe the magi were sorcerer priests from Sheba who studied the stars and knew the prophecy of Balaam and came to honor and revere Israel’s new king named Jesus.

But when did they come?

This seems to be the most ambiguous portion of the story since Matthew is the only one who includes this event.  Many people believe that this was a few years after Jesus’ actual birth because when Matthew records this story he says that the magi entered “the house.”  However, if you reread my last post, you’ll see that this is no problem at all and could potentially put the magi at the actual nativity scene.  Personally, I believe that the magi weren’t there for another reason.  As I mentioned, the gifts the magi brought were worth quite a bit of money.  Yet interestingly, in Luke’s Gospel when we see Mary offering her purification sacrifice in the Temple just days after Jesus’ birth, she offers the sacrifice of the poor (Luke 2:22-24 cf. Leviticus 12:7-8).  If the magi had visited, Mary and Joseph, who were both devout Jews, would have purchased the more expensive sacrifice in the Temple.  This doesn’t mean that they didn’t return to Bethlehem after the going to the Temple (and meeting Simeon and Anna).  I believe they did and a short time, maybe a few months not a few years, later the magi met them in Bethlehem and the holy family used the money from the gifts to flee and reside in Egypt for a time.

Summarizing all of these posts is something I have looked forward to.  I intended for each of them to stand on their own, but there is something stringing through that’s uniting all of them together.  First, let’s look at the events of the First Christmas.  We have the King of the Universe being born in the most humble place possible and those to whom God announces this birth are the outcasts, outliers, and unexpected.  They were unclean.  They were pagans.  They were homeless.  They were consorting with demons.  And yet God called these people.  He called them from darkness into light.  He told them that Jesus was the King.  And isn’t this theme woven throughout Jesus’ parables?  God’s message comes to the expected and they don’t care, so he takes it to the highways and the hedges and calls sheep of a different fold.  What better picture of that do we have than the First Christmas?

Secondly, let’s look at the timing of the First Christmas.  God was doing something intentional by sending Christ when he did.  He was telling us about who Jesus was and what he had come to do.  He was the one greater than Moses who has come to lead us to a better Promised Land.  But don’t we miss this when we celebrate on December 25th?  Wasn’t that the date of the worship of some demi-god or the solstice?  Doesn’t it bother you to think that Christians have co-opted a pagan holiday?  While I believe we may miss some of the intricacies of what God is doing, it doesn’t bother me to think that Christians took a pagan holiday and retrofitted it making it into a Christian holiday.  In all honesty, it fits perfectly, because we used to be pagans and our great glorious God and savior shone a bright light in the dark, cavernous night sky of our soul and drew us to his Son at whose feet we fell in worship and now cry aloud, “Hallelujah and Merry Christmas!”