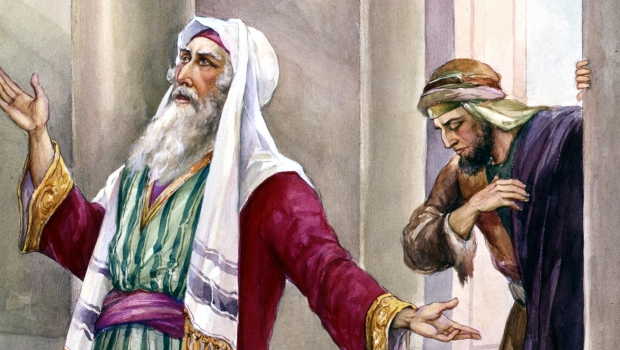 The American Evangelical church has become the Pharisee bathing in self-righteousness implying homosexuality is the sin of all sins.

Jonah 2:9 tells us that “salvation is of the Lord”. Ezekiel 36:26 describes regeneration as God removes our unresponsive heart of stone and replaces it with one of flesh. Romans 1:16 assures us that the Gospel “is the power of God for salvation to everyone who believes”.  (And that’s only 3 verses out of 1,189 chapters!)  Out of those 3 verses, how much of a lost person’s salvation depends on or our cleverness or creativeness or quick wits? Zero. Zip. Zilch. Nil. So, why is the church at such a loss winning the lost to Christ, particularly those lost in homosexuality?

The answer and much needed rebuke for all of us in the church may very well be found spoken by Jesus recorded in Luke 18:9-14:

9 He also told this parable to some who trusted in themselves that they were righteous, and treated others with contempt: 10 “Two men went up into the temple to pray, one a Pharisee and the other a tax collector. 11 The Pharisee, standing by himself, prayed thus: ‘God, I thank you that I am not like other men, extortioners, unjust, adulterers, or even like this tax collector. 12 I fast twice a week; I give tithes of all that I get.’ 13 But the tax collector, standing far off, would not even lift up his eyes to heaven, but beat his breast, saying, ‘God, be merciful to me, a sinner!’ 14 I tell you, this man went down to his house justified, rather than the other. For everyone who exalts himself will be humbled, but the one who humbles himself will be exalted.”

For the last couple years I have thought and even said a time or two from the pulpit that the church must stop looking down our noses at those lost in the sin of homosexuality just because they sin differently.  And that is exactly what we see here in this passage of Scripture.  The Pharisee is boasting in his self-righteousness, ignorantly assuming it is qualifying him to stand righteous before God.  He points out that he’s “not like the other men, extortioners, unjust, adulterers, or even like this tax collector”.

I know I’m painting with a broad brush here, but that is exactly why there’s such a barrier to overcome when trying to reach the lost community of homosexuals.  I’m not saying they should get special treatment or a free pass.  But the church has failed miserably at the “love your neighbor” (Mark 12:31) part when it comes to evangelism.

The list goes on and on.  When a homosexual walks into a typical church and get the typical “you’re going to hell for being gay” mantra, the response is, “Oh ok I get it.  The church is about rules.  Their rule is my sin is the worst. I get it.  Is that it?”

By stumbling into the prideful waters of self-righteousness, two things happen…

1 – The Gospel Is Denied

When the church assumes the role of the Pharisee, it goes against the very foundation of the Gospel of Christ.  For example, consider Paul’s words when he says “not having a righteousness of my own that comes from the law, but that which comes through faith in Christ, the righteousness from God that depends on faith–” (Philippians 3:8-9).  Christian, there is nothing good at all in any of us worth saving.  It is only the merit and worth found in Christ and the work He accomplished on the cross that provides righteousness to us when we repent and put our faith in Him (Mark 1:15).  Without Christ and His work and His righteousness, we are nothing more than the dead, dry bones in the valley lying helplessly without life (Ezekiel 37).

2 – The Gospel Is Perverted

When the church assumes the role of the Pharisee, it promotes the idea that the Gospel and Christianity are nothing but a bunch of rules (law) that must be followed in order to obtain the end goal, eternal life.  Friend, before Christ saved you, you were dead in your sin (Ephesians 2:1).  Dead men don’t talk, walk, or ask for help.  It was the richness of God’s mercy (Ephesians 2:4) that made us alive together in Christ (Ephesians 2:5).  Further it was “by grace you have been saved through faith. And this is not your own doing; it is the gift of God, not a result of works, so that no one may boast.” (Ephesians 2:8-9).  Based on those passages, who among us has any room to boast as if we’re better than the homosexual when we were outside of Christ and lost?

What should happen, and it does in churches under a solid, Gospel-driven shepherd, is for folks to love on this person lost in homosexuality.  When they enter the house of the Lord on Sunday or we see them on the street or have a conversation with them, the focus should be on who Christ is and what He’s done.  It must be to point them to a loving Savior with the power to resurrect them from their spiritual deadness and awaken them to the Light of the world that gives eternal life, Jesus Christ (John 1:4).

Christian don’t forget the gutter God pulled you from.  To do so is to deny the need for Christ to absorb the wrath that you and I deserve and make little of the cross.  Be the humble, grateful tax-collector.