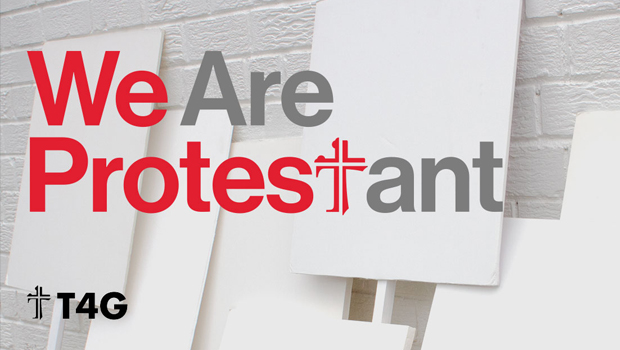 I was blessed to meet my modern-day hero of the faith, John MacArthur

After many years of “I should have gone” and subsequent years of “I’m definitely going next time”, attendance to perhaps one of the most Biblically trustworthy conferences around today became a reality.  This past Tuesday, I arrived in Louisville, KY for Together for the Gospel 2016.  T4G (as it’s known) is a biennial conference for pastors and church leaders.  It’s roots are of the reformed theology camp and attendees are taught by some of the greatest minds of modern-day Christianity.  The conference speakers included Mark Dever, Ligon Duncan, CJ Maheny, John Piper, Matt Chandler, Thabiti Anyabwile, David Platt, Albert Mohler, Kevin DeYoung, and my personal favorite, John MacArthur.

Rather than give a play-by-play recap by my own perspective, you can view all sessions for free online at T4GOnline.org.  I’m simply going to share some personal reflections and what one may expect should you attend the next one in 2018.

Drinking From A Firehose

One thing you will get at T4G is overwhelmed (though in a good way).  The general sessions taught by some of the best Bible teachers in Christianity today will no doubt edify, encourage, and convict even the most seasoned church leader.  By God’s grace the general sessions are broken up by breaks and brief panel discussions.  They offer the attendee the time to catch their breath and prepare for the next speaker.  In addition to the main sessions, there were other smaller-venue breakouts with some of the same speakers and others.

The T4G bookstore was incredible.

Books, books, and more books.  The $240 registration fee is quickly nullified and forgotten as you walk into the “bookstore” (more like a superstore) with a list your given of FREE books to collect.  But you’re not done yet.  Over the next 2 days, they will release two other books (per day) that you gather into your bag of spoils.  Additionally, you have access to purchase other books (what seems like an infinite selection) at reasonable discounts.  It is helpful to have your smartphone with the Amazon app queued up to double-check as not every deal is the best deal.

A Glimpse of Heaven

When we cross into celestial glory and stand before the throne of God above, there will be singing.  Quite possibly the closest you’ll ever come to that here on earth is at a T4G conference.  Every day preceding the general sessions, you begin by standing in the KFC Yum! Center with 10,000+ believers as thunderous choruses of theologically-rich songs are sang to the glory of God.  There is no emotional manipulation or coercion by way of light effects and fog.  Led by Sovereign Grace Music‘s Director Bob Kauflin and just a piano, 10,000 voices all proclaim God’s glory in unity. Times of worship at T4G are musically a spiritual feast for the soul.

As a regular listener of SGM tracks, I had an idea of what it was like from 2 previous Together for the Gospel albums they produced from previous conferences on T4G Live and T4G Live II.  However, this expectation was even exceeded.  As we entered the KFC Yum! Center the first day, each attendee was given a recently released hymnal “Hymns of Grace” from The Masters Seminary Press.  I would highly recommend it for your church (read more about it here).

No One Is Perfect, Not Even T4G

Together for the Gospel is hands-down one of the most trustworthy organizations striving to teach God’s word and edify church leaders.  They’re so trustworthy in fact that they would acknowledge even they are susceptible to mistakes.  The biggest blunder I found was in the bookstore.  Mark Dever noted more than once that he and others do walk through the bookstore and give their “stamp of approval” on titles sold.  Obviously they cannot read every single book and one may get through the cracks.

Ironically a book promoting popish apostasy sneaked its way into a conference remembering the Reformation.  The book was David Robertson’s “Magnificent Obsession” and sold by Christian Focus Publications.  The book’s author dangerously and wrongly declares the Pope a “Christian brother” among other misstatements.  I pleaded with the vendor to remove the book after explaining its counter-reformation dangers to no avail.  I did speak with someone from Dever’s church who took down the name of the title and promised to get the information to him.  I’m trusting that by God’s grace T4G will recognize and correct this mistake in the future.

Overall, I could not think of a better way to spend 2 1/2 days for one seeking to grown in Christ as a church leader.  The fellowship was encouraging, the worship was overwhelming, and the teaching top-notch.  One should definitely get the meal plan (additional $75) as it saves time and money if you want to get the most out of the T4G experience.

If all that wasn’t enough, meeting other brothers from around the world (leaders from over 50 countries attended) is both humbling and exciting.  I shared one meal with some brothers who pastor a church in the remote mountains of the Philippines.  What stories they had to tell about God working in that country!  Another meal found me sitting across from a brother from MO who had some brothers I know in common.  We truly are one body in Christ!!

The only caution I would give others is one I need to remember myself.  It’s natural, but unhealthy, to take this experience and expect it to be the standard of your local church body.  For me, the hardest part is adjusting from worshiping with 10,000+ belting out hymns to our Savior being moved by Biblical truths set to theologically-rich songs to the contemporary sounds at my church.  As a wise brother advised, there are some joys to be found in the worship at our local body and they should not be overlooked or discounted.  Rather, one should use these experiences, such as intense worship, as an inspiration and edification to help build one’s local body up in that area.

As I sat in my office the day after T4G ended, the silence was deafening.  The only salve for the emptiness was my trusty Spotify playlists from Sovereign Grace Music reminiscing about the experience I just had.  I’m already excited for T4G 2018 and looking forward to reuniting with the brethren there.  Until then, I’m blessed to be Together for the Gospel with my local body.