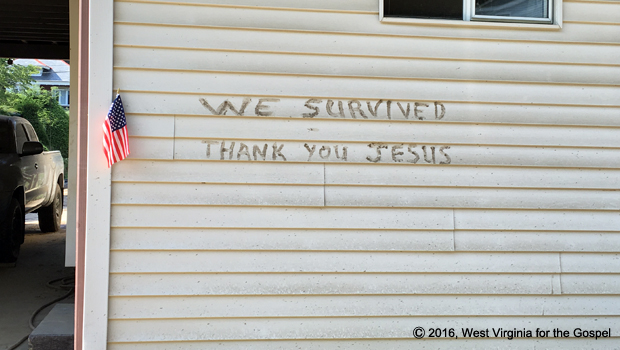 (This is the first in a multi-part series on Gospel experiences while serving to help recover from the 2016 WV Floods.)

CLENDENIN – On the evening of June 23, 2016 into the night and early morning of June 24, in a matter of hours, 8 to 10 inches of rain fell invoking a catastrophic flood in Southern West Virginia. Homes and cars were flung with ease down rivers as creation unleashed enough water for the National Weather Service to consider it a 1,000 year flood for the region.

As I woke up the next morning, local and national news outlets were inundated with images of the carnage laying in the storm’s aftermath.  It was heartbreaking to see fellow man so helpless and devastated.  Immediately, questions begin to rouse in the Christian’s mind.  They are questions that not only will we wrestle with as believers, but shepherds will as well trying to make sense to their flock.

As I pondered many questions myself, I could not quell the stirring in me to do something. My Christian conscience would not allow me to sit from afar, throw a few bucks at it, pray a prayer, and move on with my life.  After contacting a few pastors and getting a loosely formed plan, I loaded up the ‘ol Kubota and headed out to Clendenin, WV.

The short drive from the interstate to downtown was bad – really bad.  Yet it was not even close to a glimpse of what devastation lay ahead downtown. As I rounded the last turn before the intersection into town, my heart sank as I was transported from Appalachia to what appeared to be a war-ridden, third world country. Law enforcement and military were everywhere, choppers flying overhead, EMS crews traveling around, and in the midst of it all, people of Clendenin wandering around in a daze like a zombie not sure of what happened.

There, I began helping out a few folks.  I was able to have a conversation with a man living next to what used to be a home.  His neighbor had fallen asleep watching TV as the waters washed him and his home down the hollow into the swollen Elk River.  He was grateful for the cold Gatorade I gave him, but not so into talking about God.  However, he did have the courtesy to bow his head while I prayed for him.

The gutted inside of Mt. Pleasant Baptist Church.

My prayer the entire morning was, “God direct me to those who need help where I can share the Gospel.”

I ended up helping the brethren at Mt. Pleasant Baptist Church.  What a display of the Body of Christ to behold! While their gymnasium succumbed to 8 ft. of water inside and their sanctuary to 4 ft. inside, with their congregants working to gut the buildings and clean, they continued to serve the community with supply dispersion tents lined up in their parking lot. Since that day, rather than start rebuilding the sanctuary immediately, they have turned their gutted sanctuary into a supply dispensing location.  (While this shouldn’t be news, in today’s age of the modern American evangelical church would usually be more worried about its own building that others.)

Ms. Vicky who owned the home I worked at for a couple days.

When things slowed a bit, I asked if there was a list to folks who needed help.  The youth pastor’s wife whipped out her phone and gave me a name and number.  I called and the lady was overwhelmed with joy that someone would come and help.  Ms. Vicky had all her ruined belongings and heavy furniture and appliances to remove, a perfect use for my Kubota tractor I had in tow.

The overwhelming visual on display everywhere is the warning found in 1 John 2:15-17.  We don’t realize how much value we put on “things of this world” or how much of “pride in possessions” we have until such an event.  The flood waters had turned Ms. Vicky’s material possessions into a water-logged, mud-stricken mess.  Only a few items escaped a watery grave.

The beginning of a long couple days of clean up at Ms. Vicky’s home.

Glorifying God, Proclaiming the Gospel – The Most Important Task

Many well-intending Christians serve God with grossly unbalanced scales of what matters.  We can feed all the victims, clothe those who have no clothes, and even rebuild an entire town.  However, if we stop there with only meeting the physical need, we simply make unbelievers comfortable on the way to hell.  The Gospel is a message that must be told (Romans 10:17).

We often see Christians cling to trendy slogans that look great on the back of a Christian t-shirt, but are grammatically and theologically impossible.  The biggest offender in this category is the infamous, “Preach the Gospel wherever you go, use words when necessary…”  That is grammatically impossible because you cannot live news.  Could you imagine turning on the 6 o’clock news and just seeing random footage of people walking around with no audio? It wouldn’t be very helpful because news is meant to be told.  We find it “heard” and “told” in Romans 10:14 carried by messengers. It is theologically impossible in the sense that the god of this world has blinded the unbelievers’ eyes to the light of the Gospel (2 Corinthians 4:4).  So in that respect, how will an unbeliever know the difference between the Christian, the atheist, the Buddhist, the Muslim, etc. handing them a cup of water if he/she is as 2 Corinthians 4:4 describes “blind”?

In the upcoming parts, I will recount 3 opportunities where the Gospel of Christ was proclaimed and show how even in the midst of tragedy, it can still be done.