Shou..." /> Should “Non-Christians” Be Permitted To Participate On A Worship Team? – West Virginia for the Gospel
Praise & Worship

Should non-Christians be permitted to participate on a worship team?  This is sort of an odd question because if a person is truly a “non-Christian”, they typically wouldn’t want anything to do with even going to a church let alone contributing to church functions.  We have to be careful in our discussion of this topic to not off-handedly group all non-Christians with atheists or agnostics.  Generally speaking, a non-Christian who has been faithfully attending services in your church is neither atheist nor agnostic, but simply has yet to find God.  This particular fact leads a lot of worship leaders – myself included – to not completely dismiss the concept of allowing so called “non-Christians” to join a worship team.

I, myself, have experienced the situation where, as a worship leader, I had permitted 2 non-Christians to take part on a worship team.  After long deliberation and consideration of the circumstances from all angles, I had decided that such a move would be an inroad toward their search for God.  I had surmised that the additional exposure to more Christian elements outside of the usual weekly service meetings would be a boon to them becoming new young Christians.  And because they were brothers, I had speculated that they would be able to be a constant aid to one another on their journey toward Christ.  The result is that they both became Christians through the experience.

One would consider the previous situation a strong argument for allowing non-Christians to join a worship team.  However, it is not!  As I had mentioned, a great deal of deliberation and consideration went into my decision and it worked out well for all involved, thanks be to God.  But I did not consider the two young men to be “non-Christians” but “potential Christians” at the time.  There again, I must stress that, that was for that individual circumstance.  I contend that a worship leader should shy away from the philosophy that non-Christian candidates for the worship team are not so much non-Christian as they are potential Christians.  This is a dangerous philosophy to assume and more often than not, it will cause problems.

Let’s consider this hypothetical example.  Imagine you have 4 sons with whom you have done your best to diligently raise to honor God.  You envision them marrying the finest of upstanding Christian women and having a wonderful life with them.  But one of your sons becomes enamored with a non-Christian girl.  After a while the young man is eventually able to bring the young lady to God through his example of a Christian walk.  Do you then tell your other 3 sons to ignore your heed to seek out Christian wives and open their hearts to any non-believer that may happen to catch their eye?  Of course not!  Ideally, you still want your remaining sons to find Christian mates because you know that your first son’s experience with a non-believer is more the exception than the rule.  It’s the same with placing non-believers on a worship team.  It may work, but chances are it won’t.  Why?

First and foremost, John 4:23-24 tells us that God seeks individuals who worship Him in both spirit and truth.  How then, can a person who has yet to know God and has yet to recognize His immense grace and glory genuinely worship Him in spirit and truth?  Secondly, 2 Corinthians 6:14 tells us to not be unequally yoked with unbelievers.  A worship band is a team.  I would venture to say that it is – or should be – more of a team than any sports team and certainly any secular band out there.  Therefore, it stands to reason that all members of such a closely knit unit should share the same visions, beliefs and passions – all of which should be God-centric.  Members without the same heart and purpose can not exalt God in one accord and can hinder true worship.  It is for this reason that we can do away with the false notion that only the worship leader needs to be a believer.  Lastly, whether it is right or wrong and whether you want it that way or not; when you are up on stage, you will automatically be thought of as a leader in the eyes of the congregation.  It is inevitable.  Therefore, the members of a worship team should already have leadership abilities.  Logic dictates that a “leader” in a church should be utterly devoted to God – heart, mind and soul.  We also want our leaders to be well versed in scripture and wise in the ways of the Lord do we not?  A worship team is held to the same expectations. 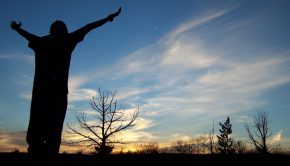 So, What Exactly Is Praise And Worship??? →