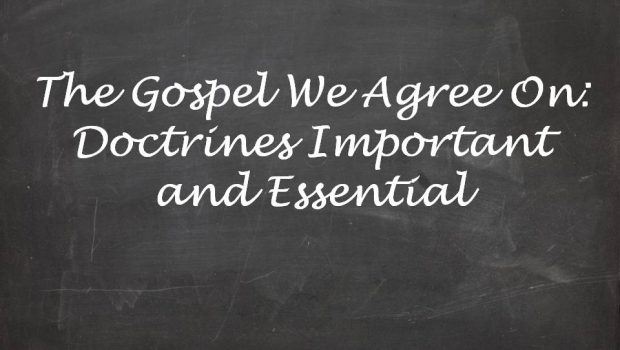 There has been something of a kerfuffle regarding certain contributors over at The Gospel Coalition lately.  Tullian Tchividjian was planning on leaving TGC in August, but his departure is being hastened.  I am in no position to speak about individuals or ministries involved.  I simply do not know enough about what is happening or why, and I’d rather not wildly speculate at this point.  However, Tchividjian has made some comments that are worth reflecting on.

Tchividjian notes that he has detected something of a theological shift at TGC lately.  He also states that the “coalition” is not really a very big coalition, mostly Baptists and Presbyterians.  And if you read between the lines, it is mostly Baptists and Presbyterians of a Reformed type.  Now, Tchividjian is also Reformed, so you would think this is not that big of a problem.

I suspect the issues are about something else.  They don’t seem to be centered around the Gospel.  As Christians we believe in the Gospel of grace, something Tchividjian certainly believes in.  Tchividjian believes in grace, loads of it, extra-strength grace in fact.  This seems to be reflected among many of the contributors at TGC, so what’s the big deal?

It seems, and perhaps even this may be too speculative, that the issue is one of trajectory.  As Christians, we agree on the Gospel and this is essential.  If there is disagreement about the nature of the Gospel, we really have different religions in play.  Disagreement on the Gospel is not permissible.  This is the one thing Calvinists and Arminians should lock arms and agree on.  Sins are remitted through the death, burial, and resurrection of Jesus Christ (1 Corinthians 15:1-8).  This is the Gospel.  We allow no compromise here, just read Galatians 1:6-9.

But often, in our public discussions, especially those mediated via blogs and social media, this agreement is not evident.  There is no “grace key” to indicate that we don’t mean to sound like jerks, and we actually think we are having  a productive and civil discussion.  And this is compounded by the fact that real disagreements do exist.  I love my Arminian brothers and sisters, and I believe they are true brothers and sisters, but I really do disagree with them about some things.

This may be where Tchividjian is in relation to TGC.  I suspect he loves people like Tim Keller and Thabiti Anyabwile and D. A. Carson.  I also suspect he probably disagrees with them on certain things.  For instance, Keller and Tchividjian are in a denomination that practices infant baptism, Anyabwile is not.  This is not essential, but it is still a real disagreement.

This brings me to my point:  We need to distinguish what is essential from what is important, and what is important from what is peripheral.  Before I develop this, allow me to say that I am by no means saying Tchividjian or anyone at the TGC is failing to do this.  I use them for the purpose of illustration, not accusation.

What is essential should be clear, it begins with the Gospel, and extends out to what (thanks to C. S. Lewis) we call mere Christianity.  This includes belief in the Trinity, the Deity of Christ, the physical resurrection of Christ from the dead, the personal return of Christ to the world, the inspiration and authority of Scripture, and other such matters.  If it is mentioned in the Apostle’s Creed, it is basically essential.

Now other things are important, but not essential.  These are typically developments on essential doctrines.  For example, the doctrine of inspiration is essential.  The doctrine of inerrancy follows from inspiration as a logical conclusion.  Yet, someone could believe in inspiration and not believe in inerrancy.  Such a person may be a true believer, but a logically inconsistent one.  We need to help them think better, to show them the right conclusion of their accepted premises.  Another important, but not essential, doctrine is the time of the millennial reign.  Belief in Christ’s personal return is essential.  But whether one is pre-, post-, or a-millennial is not essential.  Our belief about the time of Christ’s return in relation to the millennium is important, and belief in His return itself is essential.  Yet there is room for disagreement on the time line.

I will add a controversial point here:  Calvinism and Arminianism are also important, but not essential.  I happen to think Arminians are inconsistent to believe in salvation by grace while also believing in synergism.  Arminians think I am inconsistent to believe in God’s love while also believing in unconditional election.  Our disagreement here is important, but not essential.  We agree on the Gospel, which is essential.

A peripheral issue would be one that is hardly consequential at all.  For instance, trichotomy and dichotomy come to mind.  Whether man has a soul, spirit, and body, or just a body and a soul, is really not that important.  In fact, it has almost no influence on any other theological or biblical issue.  If someone believes in Covenant Theology, I can guess about 80% of the rest of their theology.  If someone believes in trichotomy, I can’t figure out anything about their broader theological commitments.

We Young, Restless, and Reformed types have not always been very good at this.  And we need to repent.  Women in pastoral ministry is an important issue, and if you know me you know I’m a complementarian.  But belief in women in pastoral ministry is not an essential issue, and it is not a denial of the inspiration of Scripture.  We need to stop treating egalitarians like they all rabidly follow John Shelby Spong.

At the same time, we cannot sacrifice truth on the idolatrous altar of superficial unity.  We do need to have a robust and informed discussion about issues like Calvinism and Arminianism, complementarianism and egalitarianism, and Covenant Theology versus Dispensationalism.  But this discussion should take place under the umbrella of the Gospel we agree on.  The Gospel should not be placed on the periphery of the whole affair, but should be the center around which the rest of the affair turns.