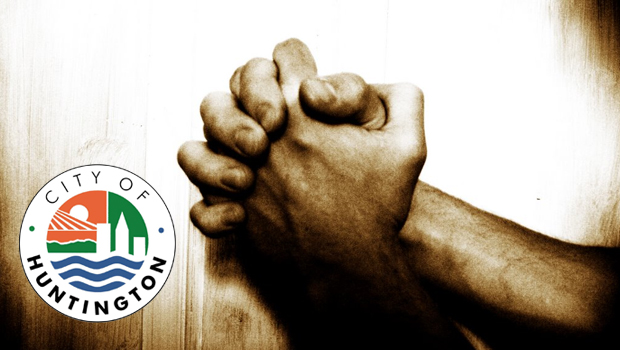 “I have seen the power of prayer personally in my life.”

In our instant text-message-cellphone-email world, our natural yearning is for solutions that produce instantaneous results to problems.  This prideful mindset has even influenced how many attempt to do evangelism today.  So-called evangelists preach a message and then run lost people thorough a “sinner’s prayer” (found nowhere in Scripture) making so-called conversions resemble a flu-shot vaccine line at the local health department.  The more Biblical approach of preaching the Gospel (Romans 10:17) and laboring with an unbeliever until Christ be formed in them (Ezekiel 36:26) is traded for some kind of instant gratification.  In short, due to our fallible nature, at one point or another, we have all lost faith in the truth of Romans 1:16.

…But don’t tell Huntington Mayor Steve Williams that.  How much faith does he put in the “power of the Gospel to save”?  So much that on August 5, at the Huntington Police Department, after announcing an initiative to get city council to approve $500,000 worth of funding for the Huntington Police Department to combat drug trafficking and related crimes, he followed up with a left-hook no one saw coming (see video below).

Admitting there’s no silver bullet to defeat his city’s ever-growing drug problem, he let loose with this remark, “I’ve been so consumed over the prevalence of drug violence, drug crime and also seeing the level of addiction,” he said. “We obviously have to educate people not to do [drugs] to begin with, we have to have effective enforcement and we have to have treatment and recovery programs, but I have seen the power of prayer personally in my life.” (emphasis added)

Did you catch the overtone of Romans 1:16?  Though I do not personally know Mayor Williams, I can tell you that it takes some courage, especially in today’s politically correct climate, for a public official to so boldly make a call to “spiritual” arms.  By his remarks, we can see an unwavering faith in trusting that the Gospel does have the power to change people.

Although social programs have their place and are needed, true change will only take place when it is from the inside out.  It is in that spirit that we urge you to join Mayor Williams and  fellow believers this Sunday, September 7 at 11:05 a.m. to pray for God’s intervention in the City of Huntington.  Whether it is the police department or EMTs or victims or even the drug dealers themselves, there is much to pray for.

West Virginians have always had a family mindset of “you mess with one of us, you mess with all of us”.  How great would it be for us as Christians here in the Mountain State to take hold of our faith and pray with and for our brothers and sisters in this manner, in West Virginia for the Gospel!  May God bless and save the great city of Huntington!!