As I’ve mentioned in the past few posts ( First Christmas: Where – West Virginia for the Gospel
Articles 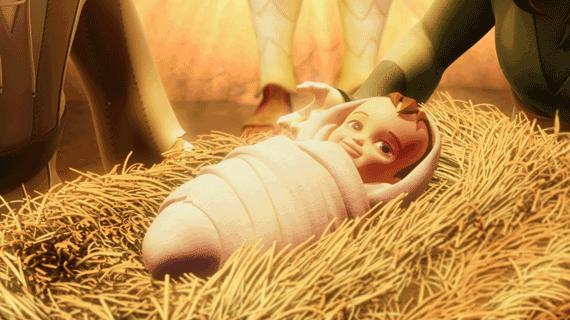 As I’ve mentioned in the past few posts (here and here), the thing that frustrates me about Christmas is how our distance from the original culture has caused us to miss so much of the story. God wrapped up this present in a culture on purpose. While the message certainly is universal, there are cultural elements we must grasp if we want to fully understand what God is doing. So let’s dive in. 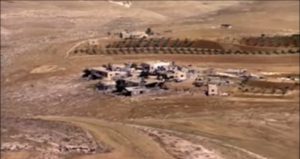 A small village on the edge of the Judah Wilderness. This was about the size of Bethlehem when Jesus was born. 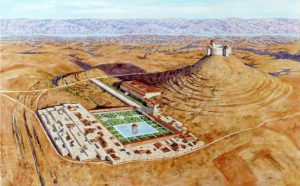 Bethlehem sits on the edge of the Judean wilderness. When Jesus was born, it was not the large city that it is today. It was a remote, rural village with 300 people at the very most. Yet just three miles away sat King Herod’s palatial fortress, the Herodium, dominating the landscape and skyline. (Ray VanderLaan has an excellent teaching on this).

This is where Jesus was born.  But we can get more specific.

“And Joseph also went up from Galilee … to the city of David, which is called Bethlehem … with Mary, his betrothed, who was with child. And while they were there, the time came for her to give birth. And she gave birth to her firstborn son and wrapped him in swaddling cloths and laid him in a manger, because there was no place for them in the inn.” (Luke 2:2-7 ESV)

The word translated “inn” (katalyma) here in Luke 2 is found two other times in the Bible. The interesting thing is that it isn’t translated “inn” either of those places. Both instances occur in the same story told by Mark (14:14) and again by Luke (22:11). It’s Jesus’ last Passover and he tells his disciples to go into the city and tell a man carrying water that the Master needs the…”katalyma.”  Jesus doesn’t say “inn.” He says, “the room” (ISV). Initially, this means that Luke 2 is a poor translation because “inn” in English means hotel. Holiday… Red Roof… Comfort… Ramada… Days… Hampton… There was nothing close to anything resembling a hotel in a town the size of Bethlehem at that time.

Later in Luke’s Gospel account, Jesus tells a story of a man rescued by a Samaritan. The Samaritan binds the man’s wounds and takes him to a “pandocheion”…an INN (10:34). Here we have a specific word meaning “hotel” that’s different than the one used in Luke 2. This means there was no jerk of an innkeeper who turned away a woman in labor because she walked up to the desk just after he flipped on the “NO” for the vacancy sign. There was no innkeeper.

So what did happened? What does Luke mean by “there was no room in…’the room’”?

During that time, houses were built a number of ways, but most had the same basic elements. Every house had a family room where everyone ate, slept, cooked, and lived. Every house had a designated place for their animals so they could be brought in during the evening. And every house had a guest room, revealing just how important hospitality was, and is, in this culture. The guest room could be attached on the end or sit on top of the house. If guests came, that’s where they’d stay. Here are few first century housing design options. 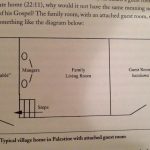 The guest house could be attached on the end or above while the family room would be on the ground floor with one side lowered and sectioned off for the family cow, donkey, goats, or sheep. 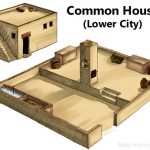 The house would have sloped downward toward the animal stalls so everything could be swept down and then out. In this house, mangers were hewn out of the clay floor in front of the stalls so that the larger animals could stand and still drink. 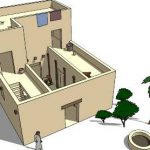 The guest room was almost always on top with the family room on the ground flood separated from the courtyard. 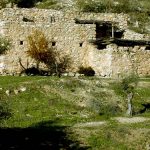 The animals were kept in the courtyard away from the living areas, but were still “inside” the house. 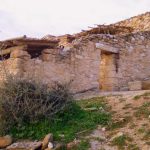 However, the animals are kept in a downward sloped area, like #1, but they’re not in the courtyard or in the family room. They are kept in a room similar to a cellar or basement, yet not as deep.

So, let’s examine what Jesus is looking for at his last Passover in Luke 22. He tells his disciples that the Master needs…the room (ISV), the guestchamber (KJV), the guest room (ESV, NIV, NASB). This is where Mary and Joseph were trying to stay the night Jesus was born. It’s possible that Joseph was relying on the hospitality of a family friend in Bethlehem whose “guestchamber” was full when he and Mary arrived. So then what happened? Where did they end up? Where was Jesus born? Luke really doesn’t tell us, but he does give us some clues.

First of all, he tells us that there was no room in the guestchamber for Joseph and pregnant Mary.  He also tells us that Mary laid Jesus in a manger to sleep after he was born. This basically leaves three options.

Option #1: Jesus was born in a cave that functioned as a sheepfold. 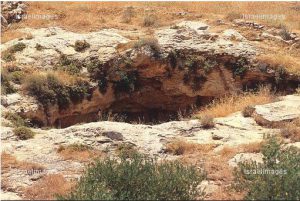 On the border of where the fields meet the wilderness, there are caves that served as natural sheepfolds sheltering both the flock and the shepherds from wolves, thieves, and the elements. Inside the cave, there is a small enclosure sectioned off by a short wall. This enclosure would have been where the shepherds slept and kept their belongings. Inside the enclosure a manger or stone watering trough was kept so the flock wouldn’t have to leave the cave to drink. Mangers weren’t used for food, they were used for water. Shepherds didn’t bring the food to the flock, they took the flock to the food. Because of their usefulness, these caves have been used for this purpose since before the Israelites arrived in the Promised Land. It makes sense why David eluded Saul for so long by hiding in caves. He knew them all like the back of his hand from when he was shepherding his father’s sheep. 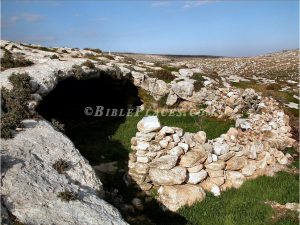 The smell of one of these caves is overpowering. There is six inches or more of soot on the ceiling from thousands upon thousands of shepherd’s fires. The floor is essentially several feet of packed and trampled manure from the thousands of sheep over thousands of years. (Check out this exploration of Samson’s cave from the Book of Judges).

And in this place, imagine a high school girl, Mary, laying on a sheepskin inside this small enclosure, inside a cave giving birth…maybe with a midwife, maybe with just Joseph…

Option #2: Jesus was born in the family room / courtyard / cellar of a house where the animals were kept.

Because of the census, Mary and Joseph traveled to Bethlehem where they were received into a private home. Jesus was born by the animals, wrapped, and (literally) “put to bed” in one of their mangers. Why weren’t they invited into the guestchamber? It was already occupied by other guests that had returned for the census as well. The host family graciously allowed Mary and Joseph to stay in the family room of their house. However, when Mary was about to give birth, House #1: the family room was cleared of men; House #2: she was made to go into the courtyard; House #3: she was made to go in the cellar and other women assisted her in bearing her son. After he fell asleep, she had nowhere to put him other than the manger. So, the Living Water was placed in a watering trough.

Option #3: Jesus was born House #3, but the cellar was a cave and the house was built on top.

This option has the most historical veracity. About A.D. 150, Justin Martyr wrote that Jesus was born “in a certain cave.” About A.D. 248, Origen wrote, “there is show in Bethlehem the cave where he was born. History tells us that the same cave that Justin and Origen refer to is the same cave over which Constantine built the Church of the Nativity in A.D. 326. For more information on this option, check out this helpful video.

Personally, I favor Option #2 and am sympathetic to Option #3 though Option #1 has it’s merits. However, I have a few reasons I believe Option #2 and/or #3 is correct.

1) Joseph was returning to the village of his origin. In this culture, historical memories are long and extended families’ connection to a village was important. Joseph could have walked into Bethlehem and said, “I’m Joseph, son of Heli, son of Matthat” and most homes would have been open to him.

2) In a hospitable culture like this one, are we to believe that no attention was given to a young girl giving birth? The entire community undoubtedly would have felt a sense of responsibility to help. Think of the arrival of the shepherds. If on arrival they had found the family alone and cold in a cave, they would have said, “Come with us! We know women who will take care of you!” The fact that the shepherds did not move the family indicates that they felt they could not have offered better hospitality than what Mary, Joseph, and Jesus were experiencing.

3) Mary had relatives (Elizabeth) in “the hill country of Judea” (Luke 1:39-40). Bethlehem sits in the center of this area. If Mary and Joseph had failed to find shelter in Bethlehem, which seems unlikely, why wouldn’t they have traveled a few extra miles to Zechariah and Elizabeth?

4) There’s also an assumption reinforced by pageants and movies that Jesus was born the same night the family arrived in Bethlehem. However, Luke 2:6, particularly in the KJV, indicates that some days passed between their arrival and Jesus’ birth. “[W]hile they were there, the days were accomplished that she should be delivered” (emphasis added). The text allows for enough time to pass for Joseph to make arrangements, though the village was very crowded, as opposed to hurriedly rushing into a cave. 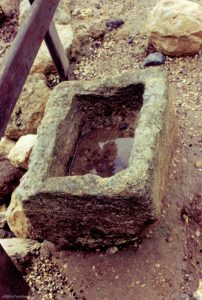 Out of our love for Jesus, we have turned Christmas into something really nice, sterilized, sanitized, pretty and beautiful with a wooden barn, clean animals, and golden straw. We have pristine hay, the smell of pines, soft light, and no manure. I’m not suggesting there’s anything wrong with this, but we are making things more difficult for ourselves. God didn’t have to come this way. Jesus could have appeared full grown. So why did God come like this? Because He wanted to paint a picture. He wanted to tell a story in the wrappings of a culture. Therefore, we must be careful when we tamper with the picture. We must be careful when we disregard the culture, because when we tamper with the picture, it has become harder and harder to see God’s point. This is why Christmas is so frustrating. It has become increasingly difficult to imagine that it was actually hard for Jesus to come here. We have repainted the picture to make it like it was nice. God loved us so much he was willing to leave Heaven to be born in a dirty, dark, obscure, smelly place among the animals.  It wasn’t pretty. And the nicer we make it, the harder it is to feel the love of God. We know and understand the love of God. At Christmastime, we sing of it beautifully and in such theologically correct prose! But in order to feel that love, we would be better off having our church’s Christmas service in somebody’s unshoveled pig barn as opposed to an ornate sanctuary.  It was a dirty place, a dark place, and in the shadow of Herod’s palatial fortress just a few miles in the distance…this is where the King of the Universe was born.