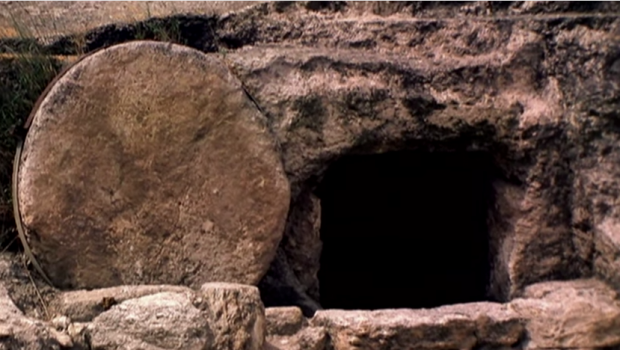 As this series comes to a close, I want to end with two final observations about the first Resurrection Sunday.

First, the stone in front of the tomb was undoubtedly very large. Today, garden tombs in Jerusalem similar to the one described in New Testament have channels for the stone that are more than a foot wide so it would not tip over. These stones would have easily weighed several tons. When the women came through the streets around sunrise on that Sunday morning, they naturally wondered who would roll the stone away for them so they could access to the body of Jesus. And we know the rest of the story, right? An angel came and rolled away the stone with great strength and Jesus came out of the tomb. Then the women, and later the disciples, came, looked, and saw that the tomb was empty. But if you read the text carefully, that’s not the proper sequence of events.

On that Sunday morning, Jesus left the tomb, then the angel came and rolled the stone away. The angel did this so that the women and disciples could come and see that it was empty and Jesus was indeed alive. This is an important distinction. Jesus did not need the stone rolled away for him to exit the tomb. No stone could hold back the power of the Messiah after God had raised him from the dead.

Second, according to Leviticus 23, there are three Jewish holidays that occur very close to one another. The first is Passover, always on the 14th day of the second month. Passover comes right as the barley begins to come to a head. Headed barley is what marks the beginning of the Passover month. The feast of Unleavened Bread is always on the Sabbath (Saturday) after Passover, potentially more than a week away. This is the holiday where the people pray for their growing grains asking for God to give them bread (or life) out of the ground. The Feast of First Fruits is always a day after after Unleavened Bread and would always fall on a Sunday. At the Feast of First Fruits, God commanded his people to bring Him the very beginning of their spring harvest, their “first fruit,” in recognition that He deserved the first and the best. This also demonstrated their complete reliance on Him, for what if locusts or hail came and destroyed the rest of the crop? They would still bring their offering to God and say, “This is all I have, God, but I give it to you because I trust you will provide me with what I need. This is proof that you have been good to me and blessed me thus far. I trust you will continue to bless me throughout the rest of this harvest.” Interestingly, about every 9 years or so, all three occur over the same weekend. Is there is good reason to believe that Jesus’ final weekend was one of these a unique ones? Let’s see.

If so, that would mean Jesus was killed on Passover.  He was buried on the Feast of Unleavened Bread and was raised on the Feast of First Fruits. Personally, I don’t think it’s a coincidence that every God-honoring Jew in the world would have been praying for life to come out of the ground on the day that Jesus was buried.

And what of Resurrection Sunday coinciding with First Fruits? Could it be that on that particular Feast of First Fruits, it wasn’t His people that presented an offering, but God himself presenting one to us? He resurrected His son as proof, as a commitment, as a promise that He would one day raise all of His people. Jesus was His evidence, a testament to his faithfulness, that His people will be resurrected unto ever lasting life. This must be so, for it is Paul who says:

Christ has been raised from the dead, the firstfruits of those who have fallen asleep. For as by a man came death, by a man has come also the resurrection of the dead. For as in Adam all die, so also in Christ shall all be made alive.
(1 Corinthians 15:20-22)

He is risen! Happy Easter!