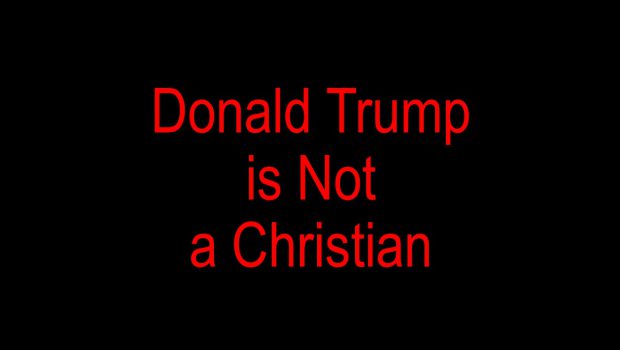 Disclaimer:  I am about to talk about Donald Trump’s religion. The opinions and views expressed in this post are mine [Josiah J. Batten] alone. They do not represent the position of West Virginia for the Gospel as an organization, nor do other contributors at WV4G necessarily share my view.

With that formality out of the way, I want to address an issue that has come up in this election cycle. This is not an endorsement, nor is it me telling people who or who not to vote for. I am writing this as someone with a background in theology and biblical studies. My evaluation here is meant to be theological, not political.

Donald Trump is not a Christian. This is a controversial statement, so allow me to explain.

First, by “Christian” I mean a follower of Jesus Christ who 1. Believes that sin is remitted through the death, burial, and resurrection of the Lord Jesus Christ (see 1 Corinthians 15:1-8); 2. Has repented (confessed and turned away) from sin; and 3. Exercises personal trust in Jesus Christ for salvation. We really could summarize this by saying a Christian is someone who believes the Gospel and repents, but stated so simply people are prone to interpret that statement to suit their own devices. Sadly many professing Christians do not understand what the Gospel is, and they also do not understand what repentance is.

Second, I acknowledge that other people use the term “Christian” in a way different than I have here. Some people use “Christian” as a cultural description. A society that (generally) reflects biblical ethics is said to have a “Judeo-Christian ethic.” Other people use “Christian” to refer to a formal relationship with a local church. In this sense, if someone is baptized and maintains membership inside of a Christian church, they might be considered a “Christian.” Still others use “Christian” as a label for their own private interpretation of what Jesus actually taught and stood for. Vast swaths of people want to claim to be “Christians” in this third sense. Thus on the one hand people want to use Jesus to promote socialism, and other people believe Jesus was a staunch defender of free market capitalism.

Donald Trump is almost certainly a Christian under these alternate uses of the term. I believe it is well-established Donald Trump was baptized. Donald Trump most definitely uses “Christian” to put his own spin on what Jesus really stood for. And in some respects Trump even upholds general Judeo-Christian ethics (though in other respects he does not).

Allow me to back that up with some key points:

1.  Trump Never Does Not Understand the Gospel.  Sure, Trump claims to be a Christian. He claims to go to church on Christmas and Easter (and other times when he can). He says he believes in God, and I do not doubt Trump believes in God. But none of these things make one a Christian. Over 4 billion people in the world believe in God or a god (or multiple gods), that does not make one a Christian. Belief in God is essential, but it is not enough. And going to church on Chrismas and Easter? Give me a break, there are pagans and atheists who attend church as much for nothing more than family traditions and nostalgia. Nothing Donald Trump has ever publicly said gives any indication that he actually understands the Gospel of Jesus Christ, which is the most basic and fundamental message of Christianity itself.

2.  Trump Profits off Immorality.  Trump is a successful business man, everyone knows this. What many people do not know is that Donald Trump owns casinos with strip clubs in them. Donald Trump is making money by promoting, facilitating, and selling sin. Whatever else repentance means, it most certainly does not mean profiting on sin. If a member of my church owned a strip club, I would begin pursuing church discipline against him in accordance with Matthew 18:15-20.

3.  Trump Denies He Needs to Repent. Don’t take my word for it, check out this article over at the Christian Post. Donald Trump insists he doesn’t need to repent. And why not? Because he is not making mistakes, in other words, he claims he is not sinning. According to 1 John 1:8 (HCSB), “If we say, “We have no sin,” we are deceiving ourselves, and the truth is not in us.” Donald Trump does the very thing that, according to the disciple whom Jesus loved, means we do not have the truth in us.

This is a very important point. Recognition of our own sinful state is a precondition for being Christian. To deny our own sinfulness is to deny the clear teaching of the Bible, and it is to deny any need for Jesus Christ as Savior. You cannot be a real Christian and deny the One Christianity seeks to follow.

As stated, I do not write this as a political endorsement or hit piece. I write this as a biblical evaluation. When someone claims to be a Christian, but acts in such a way so as to bring reproach on the name of Christ, we have a biblical obligation to point out such errors (see Jude). Donald Trump claims to be a Christian, but it is abundantly clear that he does not understand Christianity’s most essential message:  The Gospel of Jesus Christ itself. Donald Trump may be a cultural Christian, he may be a member of a church, but the evidence strongly leads one to conclude he is not a true Christian. He is not a Christian by any biblical criteria. I must draw the conclusion the Apostle John does, if we claim we have no sin then the truth is not in us.

To those of you who are not Christians, but who are looking at Donald Trump, I implore you to not evaluate Christianity based on him. I beg you to read the teachings of Jesus Christ for yourself, read Matthew, Mark, Luke, and John. Read the New Testament. Look to Christ in the Scriptures to discover what Christianity is really about.

To those of you who are Christians, and who think I should not write an article like this, I implore you to use biblical discernment. Our faith has been greatly harmed by the proliferation of a cultural “Christianity” that knows nothing of Christ or the Gospel. We have been duped into believing lies. Biblical illiteracy abounds. In the words of Chesterton “art, like morality, consists of drawing the line somewhere.” We need to begin drawing some lines, especially when deception is so prevalent and common.

To Donald Trump, I doubt you will ever read this. But if by chance you do, I beg you to look more deeply into the faith you profess. You claim to be a Christian, but your life gives reason to doubt that profession. Repent of your sins and believe the Gospel, it is not too late. Why should you repent? Because you are a sinner, and Christ is the Savior. I know you are likely to think you are not a sinner, but you have told lies, you have profited by selling immorality in your casinos, you have taken God’s name in vain. Turn from your sin and run to Christ.