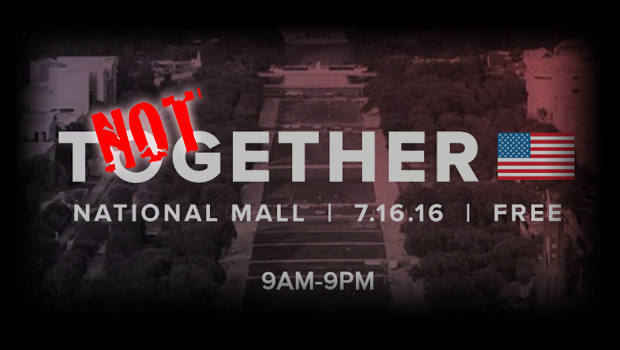 After being called out, Together 2016 updated their app to remove the “Find A Church” option which included a “Gay Affirming” filter.

Modern Christian music artists are the bait to draw Christians to participate in a festival that promotes gay-affirming “churches”.  The enemy within is real.

Original article – Consider this a loving warning to avoid the upcoming “Together 2016” event slated for July 16 in Washington, D.C.  This event is a mess with the magnitude that hasn’t been seen in years. Before you leave this article thinking I’m full of drama and going overboard, consider the following quote:

“A nation can survive its fools, and even the ambitious. But it cannot survive treason from within. An enemy at the gates is less formidable, for he is known and carries his banner openly. But the traitor moves amongst those within the gate freely, his sly whispers rustling through all the alleys, heard in the very halls of government itself. For the traitor appears not a traitor; he speaks in accents familiar to his victims, and he wears their face and their arguments, he appeals to the baseness that lies deep in the hearts of all men. He rots the soul of a nation, he works secretly and unknown in the night to undermine the pillars of the city, he infects the body politic so that it can no longer resist. A murderer is less to fear.”

Now, to get a glimpse of why Together 2016 is dangerous, go back and re-read that and substitute “church” in for the word “nation”.  That is what is happening before our very eyes.  Proponents of the heretical New Apostolic Reformation (NAR) movement are joining arms with the once-stalwart Southern Baptist Convention (SBC) leadership and the Roman Catholic Church (via the Pope on video).  From Pirate Christian Radio:

“The event promises to unite religious beliefs from within and outside of biblical Christianity, all in the name of Jesus. But which Jesus?  From the Vatican in Rome, Pope Francis will deliver a welcoming message via video to the attendees, and will be among the many “thought leaders” Hall has invited to influence attendees, along with the many celebrities who are leaders in false movements like the Word of Faith Prosperity and the NAR (New Apostolic Reformation) movements.”

The groups represented do not stay within the bounds of orthodox, Evangelical Christian beliefs. The NAR movement is dangerous as it is disguised as “Christian” but is full of heresy stemming from its claims of extra-Biblical revelation and mysticism.  It gets a free pass because it is a cousin of the “word faith” movement made popular by TBN.  Any Bible-believing Christian knows that the Canon is closed and we are not to add to or take away from God’s word (Deuteronomy 4:2, Revelation 22:19).  Your Bible is made with glue, not a 3-ring binder.  It also delves into what’s called “contemplative prayer” which involves emptying one’s mind and waiting to “heart” the Spirit.  This is a perfect trap laid to the mind by the enemy to plant thoughts there.  This is opposite of what Romans 12:2 teaches.

Learn more about NAR and its dangers here.

It should go without saying, but because of blurred lines it must be noted that Evangelical Christians also should not join arms with Roman Catholics either.  Many of the RC’s teachings do not coincide with the Bible.  We don’t earn our way through works (Ephesians 2:8-10), we are not cleansed from sin by baptism but by His blood (Ephesians 1:7), we do not pray to Mary as intercessor (1 Timothy 2:5), and we surely do not believe that the wafer and wine become the actual physical flesh and blood of Christ, essentially re-sacrificing Him every Sunday (see Catholic Catechism Paragraph 1376 on transubstantiation).

Learn why we’re not evenly yoked with Roman Catholicism here.

Why would any truly born-again Christian join arms with such teaching?  Because the trap has been laid. Modern Christian music artists are the bait to draw Christians to participate in a festival that promotes gay-affirming “churches”.  The Together 2016 iPhone and Android app even offers to filter Washington, D.C. churches by “gay affirming”.  The enemy within is real.

Brothers and sisters, you are implored to avoid this ecumenical jihad (hat tip to brother Bobby McCreery for that phrase) and stop others from being baited into worshiping a different jesus.