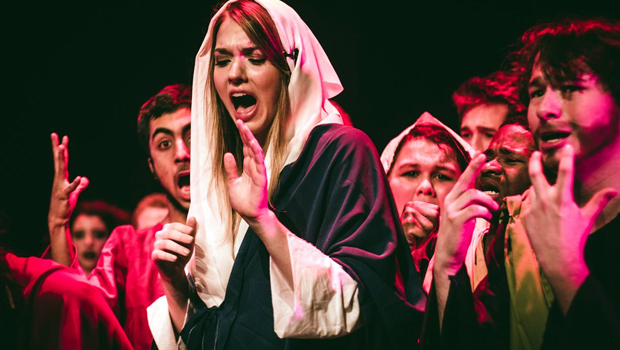 The Gospel According to Britney

It was only a matter of time.  As the modern, American Evangelical church has traded the Gospel for goofiness and a cross for cash all in the name of numbers.  The pragmatic approach, labeled “seeker friendly”, has become the norm when churches do anything and everything to attract the world at any cost and then tries to throw Jesus at them when they come, hoping He sticks.  And as churches continue that pattern, it should be of no surprise when the world decides to get in on the action using the same methodology.

The musical tugs at the heartstrings of America’s lost twenty-somethings, calling on familiar hits such
as “Stronger,” “One More Time,” and “Crazy,” to describe the birth, life, death and resurrection of
Jesus Christ. -via Press Release

Yes folks, as indicated in the title of this post, Britney Spears has her own worldly-spun “gospel” message for you.  This Thursday, November 7 at the Foxwoods Theater in New York City, America will get a dose of her new musical, “SPEARS:  The Gospel According to Britney.”

It’s intent is eerily similar to how many churches operate today.  As the worship and altar calls bring a pseudo-conviction evoked from emotion inspired by strategically chosen songs with just the right lighting, so goes the approach for Ms. Spears.  From the press release, “The musical tugs at the heartstrings of America’s lost twenty-somethings, calling on familiar hits such as ‘Stronger,’ ‘One More Time,’ and ‘Crazy,’ to describe the birth, life, death and resurrection of Jesus Christ.”

Is that not a scary reflection of what we see in the church today?  How many times have we seen churches take worldly rubbish and try to slap Jesus on it all in the name of relevance?  Isn’t the idea for the church to try to influence the world, rather than the other way around?  What happened?

What happened is the church took its eye off Jesus and discredited the potency of the Gospel.  This has led to the church believing such many lies that continue to shackle it today…

We could stop right here with this one.  Today, churches are judged successful based on their size.  The root of this lie can be traced right to good, ‘ol fashioned pride.  Let’s pause for a moment and reflect on a very similar mindset that King David had in scripture and the tragic result.  In 2 Samuel 24:1-17 and 1 Chronicles 21:1-16 the Lord allows Satan to tempt King David.  And full of pride, he numbers his people Israel.  Slight problem, Israel belonged to God, not David.  As shown in a dialogue between God and Moses in Exodus 30:12, a census should only be taken as a result of God’s command, not man’s.

Now while there are logistical reasons today why churches know their numbers, the fact that many boast about them and use it as a measuring stick is rooted in the same sin of pride that David fell to.  A quick sampling of many podcasts of services around the Mountain State, and you’ll hear pastor’s gleefully boast about such a statistic.  At the end of this tragic story, David was given 3 choices for punishment from God, 3 years of famine, 3 years of running from the enemies, or 3 days of plague.  He chose the last option which resulted in the deaths of 70,000 men from Dan in the north to Beersheba in the south.  Let’s pray that churches guilty of this repent today and turn before that number of deaths is dwarfed in a spiritual sense in our WV churches.

Lie #2 – The Bible is not relevant for today.

Probably the culprit behind many worldly-centered approaches to church growth today stem from this lie.  We are led to believe that a book written so long ago in such a different culture could never be relevant for such an advanced society that we live in today.  The wheels fall off this lie pretty quick when we consider how the truth all comes together.  First, we are the church.  As the church, Christ Jesus is the head – we are subject to Him and His word that is communicated to us via the Bible.  2 Peter 1:20-21 tells us that “no prophecy of Scripture comes from someone’s own interpretation” and that “it was not produced by the will of man.”  Ergo, the perfect and flawless Creator wrote Scripture through man and is omniscient.  To claim Scripture is irrelevant and needs help to become relevant today denies God’s omniscience.  Additionally it is at odds and in full denial of such passages as 2 Timothy 3:16-17.

Lie #3 – The Gospel is not enough, we need “Jesus+something else.”

Many of us who have been in ministry for any amount of time have been guilty of this lie.  We shy away daily from the pronounced “big shot” at our work to the friend from high school to the relative steeped in a false religion or cult as not to want to look silly if they reject the Gospel message.  We doubt the power of the Gospel of Christ to shatter the hardest of hearts and replace them with one of flesh (Ezekiel 36:26).  We quickly forget the inspiring words of the Apostle Paul in Romans 1:16, “For I am not ashamed of the gospel, for it is the power of God for salvation to everyone who believes, to the Jew first and also to the Greek.”  We quickly forget that God’s word will not return void (Isaiah 55:11).  Lastly we forget the words of our Savior, that He will draw all men unto Him (John 12:32).

The sooner the church get’s back to the Gospel and away from imitating culture, the sooner we could see maladies like Ms. Spears’ upcoming production end and get no attention or validation.  The sooner we get back to the “Gospel According to Jesus”, the sooner we can see such attempts as this for the lies that they are.