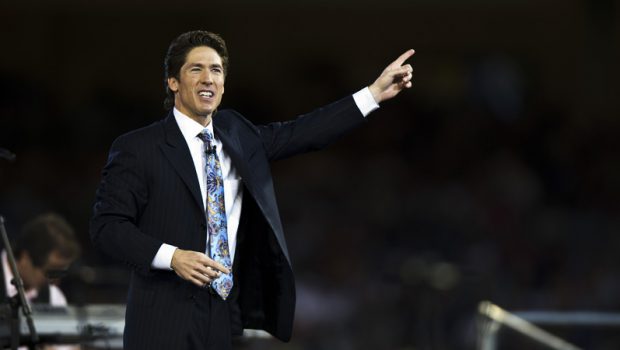 Pastor Joel Osteen of Lakewood Church in Houston, Texas is considered by many evangelicals and the culture at-large to be “America’s Pastor.”  He has essentially become the face of evangelical Christianity.  The amount of influence that Joel Osteen has over professing Christians is nearly impossible to exaggerate.  The church he serves, Lakewood Church in Houston, Texas, is the largest and fastest growing church in America.  Over 38,000 people gather at Lakewood Church every weekend to worship God and hear Joel Osteen preach.  Additionally, around seven million people in America watch Joel Osteen’s sermon every week as it is broadcasted to almost 100 nations around the world.  As I stated earlier, the amount of influence that he has over people is enormous.

On October 4, 2013, Joel Osteen wrote a blog post on his website titled, Breakthrough-Minded, in which he exhorted Christians to not “accept things in your life that are far less than God’s best.”  He goes on to write:

Be breakthrough-minded. No matter what’s happened in your past, this is a new day. New seeds have taken root in your heart. I believe the God of the breakthrough is about to visit your house, not with a trickle of favor, not with a stream of blessing. No, get ready for a flood of God’s favor, a tidal wave of His goodness.

Joel Osteen is very much a product of the Word of Faith movement; a false teaching that has crept its way into mainstream Christianity all over the world.  It has become virtually synonymous with the phrase, “name it and claim it.”  It is pretty self-explanatory.  You name the blessing that you want and claim that God is going to give it to you.  It’s that simple!  Joel Osteen demonstrates this later on in his blog post after paraphrasing Isaiah 61:1-2: “Like Isaiah, I’ve announced that a flood of God’s power is coming – favor like you’ve never seen before.  Instead of being overwhelmed by burdens, you will be overwhelmed by God’s blessings.”  He has announced that a flood of God’s power is coming and that those who are reading his blog are about to be overwhelmed by God’s blessings.  Is this really what Christianity is?

The gospel that Joel Osteen preaches is filled with words like favor, hope, and goodness but it is not the gospel of Jesus Christ.  The message that he preaches promises hope but leaves you hopeless.  Joel Osteen is the type of preacher that takes a passage from Isaiah 61 that Jesus says is about him and the work of redemption that he came into the world to accomplish (Luke 4:16-21) and tells people that it is about God wanting to give them better stuff and more of it.  The favor that God pours out upon those who come to faith in Jesus is the favor of being reconciled to him forever because of Jesus’ death, burial, and resurrection for our sins.  While it is true that God graciously provides for our needs and often provides more than we need for our joy, those gifts of grace are not an end in themselves.  The ultimate gift of the gospel is God himself: “For Christ also suffered once for sins, the righteous for the unrighteous, that he might bring us to God” (1 Pet. 3:18, ESV).

The amount of influence that Joel Osteen has over professing Christians is truly staggering.  I am praying that God would work radically in his heart to bring about a passion to proclaim the true gospel.  However, until God is pleased to do such a thing, I plead for professing Christians to turn “America’s Pastor” off of their televisions, put down his books, and avoid being sold a bill of goods that masquerades as the gospel.