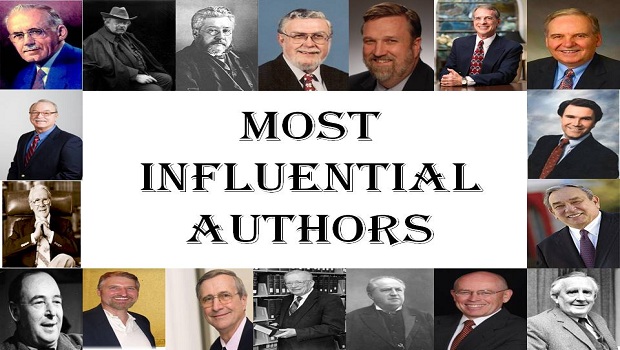 I’m frequently asked who my favorite author is. This is one of those questions that happens to be a good one, but one that is also very difficult to answer. Thus, I’m not going to answer that question. Rather, I’m going to answer the question of which authors have been the most influential for me, particularly in my theological development. This has the advantage of allowing me to give several names, whereas with a “favorite” I can only have one.

I’m arbitrarily limiting this list to my five most influential authors. This is primarily because if I didn’t set a limit the list would get too long. Also, five is a nice round number, and I like round numbers. It’s like when you are setting the volume on a TV and you stop at 24. Common sense tells you to turn the volume up just one more notch and land at 25. Being a Trinitarian, I’m sure there is something fleshly about this, but God takes us where we are at, not where we should be. Here we go (in no particular order):

This might surprise you for several reasons. First, Tolkien is Catholic. Second, Tolkien is noted for fiction, not theology. But Tolkien’s fiction makes better theology than many people’s theology does, and if you can’t see this you’re reading with blinders. Were it not for The Hobbit (the book I have read more often than any other apart from the Bible) and The Lord of the Rings I would have never become the avid reader that I am. Had I not become an avid reader, I may never have undertaken the serious study of theology. Had I not undertaken the serious study of theology, who knows where I would be? Perish the thought.

Tozer’s The Knowledge of the Holy was the first serious work of theology I read. It is the book that made me start thinking constantly about theology. Reading this book was like pouring gasoline on hay on a very hot summer day. Both chronologically and logically this book began my serious study of theology. The idea that the most important thing about us is what we think about God has been my guiding thought in all subsequent study. I’ve also continued to read healthy doses of Tozer over the years, and he does not disappoint.

If you undertake the serious study of apologetics, it is hard to avoid allowing Norman Geisler to become a major influence. The man has authored or co-authored over 80 books on nearly every major topic in Christian apologetics. He has taught many of our day’s most prominent apologists. In truth, I’m not even sure how many books by Geisler I have read. I have many more on my shelf that I have yet to read. His Christian Apologetics was the undisputed standard in the field for years, and it remains among the top five most important apologetics books still in print. It was Geisler and Turek’s I Don’t Have Enough Faith to Be an Atheist that helped mold me as an apologist.

I know this will be the most controversial name on this list. If this offends your sensibilities, change your sensibilities and the offense will disappear immediately. I’ve looked to Wilson particularly for his approach to engaging the culture. The rest of Evangelicalism is busy walking into walls in a dark cave. Wilson is busy lighting torches and digging a tunnel out. Of course, the light hurts some people’s eyes, but it’s a hurt we need to experience. From a biblical defense of satire, to a hilarious work of fiction, to the Christian family, to a comprehensive book on ecclesiology, I am trying to read everything Wilson has written (which is a lot).

In his book Love Your God with All Your Mind Moreland furnished me with a foundation for what I was already doing to an extent, and he challenged me to do it better. Moreland’s Kingdom Triangle brought together in a cohesive way my zeal for apologetics, service, and belief in the continued work of the Holy Spirit. Of course, Moreland’s Scaling the Secular City remains an important standard in the field of apologetics.

There you have it, those are five of the authors who have been most influential in my life. I know some people will wonder “Why isn’t C.S. Lewis, or Francis Schaeffer, or Leonard Ravenhill on that list?” The simple answer is they would be if I were writing a longer list. Additionally, a post like this is necessarily autobiographical. This reflects some of my history, and that’s not the sort of thing that we can just amend to who we think the best authors are (though I think all of these men are very good authors). In any case, I hope this helps encourage you read these men and men like them. Heed Augustine and “Take up and read! Take up and read!”