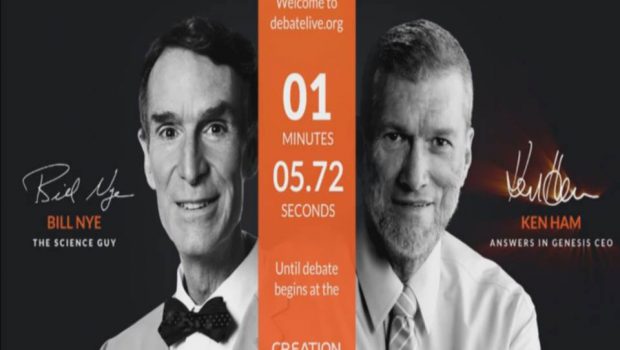 Bill Nye and Ken Ham had their much anticipated debate on the question of “Is creation a viable model of origins in today’s modern scientific era?”

Now, this is a specific question. We should evaluate who “won” the debate based on who presented a more compelling answer to this question in the given format. This doesn’t have to be the person we necessarily agree with, though people not familiar with how to objectively evaluate debates (I have judged state speech tournaments) automatically tend to assume their guy “won.”

In all honesty, I think Ken Ham won, and he is also the person I agree with more in this debate. But even a committed evolutionary atheist should admit Ham did a better job addressing the specific question than Nye did. This is so because:
1. Ham established definitions and criteria,
2. He then presented his model in a manner consistent with his definitions and criteria, and
3. He successfully undercut Nye’s objections to his criteria and how his model fulfilled it.

I’ll be the first to say the format was not ideal (it wasn’t even mediocre, it was terrible). But Nye should have recognized that he did not bear the burden of proof. Nye was presenting the negative case, and all he had to do was present challenges to the model Ham presented. And Nye came thoroughly unequipped to do this.

I don’t say this because I wanted Nye to win. I’m a Christian theist, Nye is a skeptic. Nye and I disagree on a lot. Ham and I disagree on certain specifics, but we fundamentally agree on the worldview level. Ham came prepared to discuss and defend his position at the worldview level, and Nye came prepared to discuss all of this at the evidential level.

The problem Nye had, then, was that he did not understand how to argue presuppositions. Ken Ham is a presuppositionalist. I successfully predicted his debate tactic weeks ago, and this debate was essentially exactly what I expected given my prediction.

For example, Ham pointed out that science rests on certain assumptions (presuppositions) such as the existence of the laws of logic, the existence of natural laws, and the uniformity of those laws. These presuppositions make perfect sense given a Christian metaphysic. It is not clear they make sense given materialism. Ham challenged Nye on this, and Nye never answered the challenge. Ham managed to put Nye on the defensive on worldview questions, despite the fact that Ham had the burden of proof!

But this was not the only time Nye faltered when it came to ultimate questions. When asked about where atoms came from to cause the Big Bang, Nye appealed to “mystery.” He did the same when asked about matters of consciousness. The Bible successfully predicts the creation of matter ex nihilo (from nothing – that is, no preexisting matter). This is exactly what we expect given Big Bang cosmology. Ham pointed this out (though not the way I did), and Nye just appealed to “mystery.”

This isn’t to say Nye was unable to bring up any difficulties with Ham’s views. Nye did bring up such difficulties. In fact, as I am not a young earth creationist, I agreed with Nye when he talked about the earth being older than 6,000 years and gave certain evidences (such as the number of ice layers in certain arctic regions) for this. But Ham always seemed to address, at least briefly, these sorts of objections. When Ham presented difficulties with Nye’s views, Nye seldom addressed them directly. Of course, Nye didn’t need to address them directly, but he did need to point out that he didn’t need to address them directly.

Nye, because he was arguing the negative, had no burden of proof and no requirement to present an alternative model to Ham’s view. But Nye accepted the burden of proof anyway, and so split himself between presenting evidence for his position and attacking Ham’s position. This left him little to no time to address objections to his position. While Nye had no burden of proof, once you bring an issue up, it’s fair game in a debate. And Nye gave Ham plenty of fodder to go after, which kept Nye on the defensive.

Additionally, Nye continually looked like a sophomore when he brought up issues related to the Bible. He said several times that the Bible has been translated and re-translated over 3,000 years into American English. It’s like a big game of telephone, Nye asserted. While Nye may know a lot about science, he obviously knows nothing about Bible translation, textual criticism, and the manuscript evidence that verifies the Bible’s authenticity. As someone with a master’s degree in Biblical studies, Nye’s comments about the Bible were painful to listen to. Dare I say, Nye approaches the Bible the way fundamentalists approach science. When Nye was shocked that Ham holds there is more than one type of literature in the Bible, I was shocked at Nye’s ignorance. Does Bill Nye really not know that the Bible is made up of 66 books? And does he really not know that we interpret poetry in a way we would not interpret historical narrative or epistle? In short, does Bill Nye know he should read T.S. Eliot differently than he reads Albert Einstein?

With this all said, I’m not convinced Ham won the battle of public perception. That’s an entirely different thing than winning the debate. Ham is a presuppositionalist, but a rather unskilled one. Unfortunately we couldn’t have Greg Bahnsen up on the stage. Ham was explicit about his presuppositions, but he did a poor job of showing how those presuppositions are more reasonable than secular presuppositions. Ham needs to learn how to run a reductio more effectively if he wants to be a more persuasive presuppositionalist.

Finally, I do wonder how useful such debates are. Granted, I’m glad we’re going to have a public discussion about creation and evolution. I’m glad this debate got the attention it did. But I fear it only reinforced stereotypes that young earth creationism is the only legitimate position a Christian can take. I long for the day when people recognize that Answers in Genesis does not represent mainstream Christian apologetics. With that said, I recognize the media likes controversy, and having Ken Ham and Bill Nye go at it was good for that. It gets ratings, but ratings are often a poor way to get truth.

While much more could be said about this debate (and I’m sure it will be), I’ll bring this to a close. On the whole, I think Ham did what he wanted to do, he pressed a divide between science and naturalism and demonstrated how creation is a viable model when naturalism is abandoned. Nye was unprepared to address the worldview questions on which Ham made his case, and ultimately lost the debate because of it.