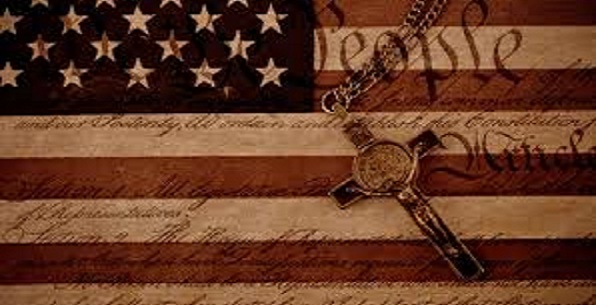 The Pew Forum on Religion and Public Life, recently revealed that 54% of Americans would rather that churches don’t engage in politics from the pulpit.  This is good news for those who have long held, “separation of church and state” as their battle cry.

But, would it surprise you know that the phrase “separation of church and state” does not appear in the United States Constitution?  Granted, the First Amendment does state that “Congress shall make no law respecting an establishment of religion or prohibiting the free exercise thereof.  However, it would be quite a stretch for any logical person to proclaim that the amendment supports separation of church and state.  It seems proponents of keeping religion out of government have twisted the first part of the amendment to fit their agenda while completely ignoring the second half.

The fact is, not one of the Framers of our Constitution believed that a synergetic relationship between government and religion was an evil to be avoided.  Most, instead, simply opposed a church that is established by the government.  This is because they because they believed that such a church would be a menace to the free exercise of religion.  Our Founding Fathers did not believe that a government should not be influenced by religion.  Our societal laws and our very Constitution stand in witness to that.  Rather, they merely strove to ensure that government had little to no influence a society’s religion.  In fact, The Northwest Ordinance of 1787, enacted by the First Congress, states that religion, morality, and knowledge are all necessary for good government and work together to ensure the happiness of mankind and that their rolls in schools and other means of education are essential and should forever be encouraged.

Granted,  governments and churches have very dissimilar roles, but both of their purposes are valuable.  In a perfect world, the government would support the church and vice-versa.  But, man’s sinful nature prohibits such a peaceful and productive coexistence.  Therefore, this begs the question; to what extent, if any, should pastors/churches be involved in politics?

“You are the salt of the earth, but if salt has lost its taste, how shall its saltiness be restored? It is no longer good for anything except to be thrown out and trampled under people’s feet.  “You are the light of the world. A city set on a hill cannot be hidden. 15 Nor do people light a lamp and put it under a basket, but on a stand, and it gives light to all in the house. 16 In the same way, let your light shine before others, so that they may see your good works and give glory to your Father who is in heaven.”

In this passage, Jesus is implying that believers and ultimately, His bride – the Universal Church – is not to be silent when it comes to the Word of God.  Believers are to affect people, governments and countries in this world with the teachings of Christ.  Accordingly, believers have a duty and responsibility to support and defend the Word of God in their individual governments in much the same way as those in government are required to support and defend the Constitution of the United States.  Therefore, the Body of Christ certainly needs to be involved in the politics and the government of this country based, not necessarily on party lines but, on how a candidate’s principal beliefs align with the Word of God.

We must remember that the church is the stalwart of truth, 1 Timothy 3:15. Not only does the Church have the right to speak out on moral issues in the government, it has a God-given responsibility to.  If believers were to adhere to the notion that the church should not be involved in politics, there would be no believers in office. There would be no salt and light to influence our government.

Though I am not a Catholic, I believe Pope Francis had it right when he said, “Getting involved in politics is a Christian duty.  We Christians cannot be like Pilate and wash our hands clean of things.”

Christians have influenced governments positively throughout history through such things as the morals of mankind, the U.S. Constitution, education, science, etc.  Those early believers were involved in transforming culture.  The mission of Christ – which makes it inherently the Church’s mission – includes furthering that transformation.  One of the best ways to do this is through the Church’s involvement in government.  To what extent?  To the utmost extent.  To which of the governmental functions do the teachings of God not apply?