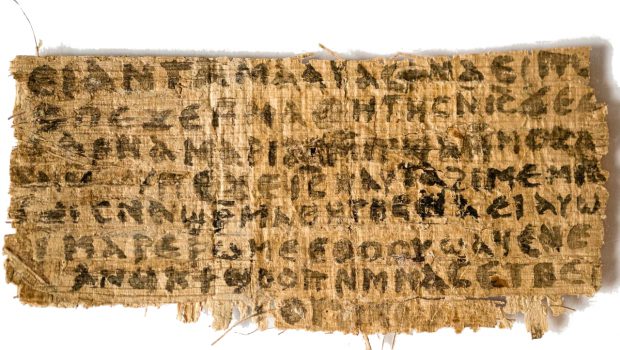 The following is an updated version of a Facebook note I wrote in September of 2012.  As this issue is once again hitting the media, I thought it important to republish this:

As I got online today, a trend on Facebook caught my attention:  It was a story of an ancient papyrus known as “The Gospel of Jesus’ Wife.”  I mentally sighed as I thought about having to deal with a new round of Dan Brown style conspiracy theories.  I read the article, knowing I would soon be asked about this find.

This issue is important for several reasons.  If Jesus had a wife, serious questions are raised about the reliability of the Canonical Gospels, why wouldn’t they mention such a fact?  Why has the dominant tradition throughout chuch history not recognized this marriage?  Would there be something that the church was trying to hide?  If Jesus was married, does this compromise the Christian Gospel?

These are the sorts of questions Jesus being married would raise.  But was Jesus actually married?  It is my position, and I believe this is the historically accurate view, that Jesus was not married.  We need to take these sorts of positions based on evidence, not on wild conspiracy or sensationist reporting.  We will now briefly turn to this evidence.

First, notice that the papyrus itself is from the 8th Century.  This is very important.  As we all know, various false teachings and myths about Christ had begun to arise far earlier than the 8th Century.  There was no lack of heretics at this time.  In fact, there was no lack of heretics in the 1st and 2nd Centuries.  So supposing this papyrus is authentic (and based on the information I now have, it does not seem to be a forgery), it is not at all early historically speaking.  The Canonical Gospels have manuscript fragments that have been dated to the early 2nd Century for John.  Now if John was the last Gospel written, and most scholars believe it was, that means it was likely written 95 AD at latest.  The other Gospels date even earlier than this, likely to the 60s AD.  Thus all four of the Canonical Gospels are 1st Century documents, some of which have manuscript fragments within about 30 years of their composition!

In contrast, this new papyrus is from the 8th Century, and Karen King believes it may be a copy of a 2nd Century text.  Thus, in terms of when the original works were written and the span of time to the first surviving manuscripts, the Canonical Gospels compare incredibly favorably in historical terms.  We are looking at 1st Century documents with at least one manuscript fragment from within thirty years and comparing it to (at best) a 2nd Century text with only one small manuscript fragment some 600 years later.  There should be no question on these grounds about which texts offer better historical information about Jesus Christ:  The Canonical Gospels win the historical battle, far and away.

On the Harvard Divinity School website dedicated to this papyrus (see here), in answer to the question “Does the Gospel of Jesus’s Wife prove that Jesus was married?” this answer is given:

“No, this fragment does not provide evidence that Jesus was married. The comparatively late date of this Coptic papyrus (a seventh to eighth century c.e. fragment of a gospel perhaps composed in Greek as early as the second half of the second century) argues against its value as evidence for the life of the historical Jesus. Nor is there any reliable historical evidence to support the claim that he was not married, even though Christian tradition has long held that position. The oldest and most reliable evidence is entirely silent about Jesus’s marital status. The first claims that Jesus was not married are attested only in the late second century c.e., so if the Gospel of Jesus’s Wife was also composed in the second century c.e., it does provide evidence, however, that the whole question about Jesus’s marital status arose as part of the debates about sexuality and marriage that took place among early Christians at that time. From the very beginning, Christians disagreed about whether it was better to marry or to be celibate, but it was over a century after Jesus’ death before they began using Jesus’s marital status to support their different positions. Christian tradition preserved only those voices that claimed Jesus never married, but now another newly discovered writing, The Gospel of Philip, shows that some Christians claimed Jesus was married, probably already in the late second century.”

Notice the explicit denial that this papyrus is evidence for the life of the historical Jesus.  Sensationalist reports that claim this papyrus “proves” Jesus had a wife are grossly misrepresenting the evidence.  This denial of the papyrus’s value for the historical Jesus comes straight from a website managed by the people who published the papyrus.  They are being academically honest, the media is not.

Second, notice that the new papyrus is very small and the information on it incomplete.  That the manuscript reads “‘Jesus said to them, ‘My wife …'” really proves nothing historically.  It MAY indicate that some sect beginning in the late 2nd Century proposed Jesus was married, but this is not even much of a new claim (remember what I said about Dan Brown?).  But there’s not very compelling reasons to suppose the text has to be read this way.  Perhaps the full manuscript has Jesus referring to the Church as His wife.  This is not an implausible idea, given that in the New Testament one of the most common terms for the Church is the “Bride” of Christ.  The simple fact is we don’t know what this manuscript actually says when completed.  But even if it postulates that Jesus had a literal wife, why should we believe this one sole, late manuscript over the earlier and better authenticated witness of the Canonical Gospels, of the Pauline Epistles, of Peter, of John, of Jude, of James?  Are we to believe that NONE of these people who were closest to Jesus thought it relevant to mention the fact that Jesus had a wife?  This is especially the case in light of 1 Corinthians 9:5; if Paul knew Jesus had a wife, surely he would add this in the question, since he does add Jesus’ brothers in this question.

Third, the papyrus raises a question about whether Jesus had a woman disciple.  This is quite easy to answer:  Jesus had many women disciples, and the New Testament records as much (such as in Luke 8:1-3).  In the letter of Pliny the Younger to the Emperor Trajan, Pliny writes about interrogating certain female deacons to discover more about Christian beliefs and practices.  The earliest discoveries of the empty tomb following Christ’s crucifixion are, in each Gospel, made by women!  Certainly there is no question about whether Jesus had women disciples.  I think what people really want to know is if Jesus had women apostles (among, or in equal standing with, the 12 Apostles).  We can state, quite quickly, that there were no women among the 12 Apostles.  But women did play a prominent role in the early church.  Whether there were actually women apostles in the New Testament really depends on Romans 16:7, and this current papyrus doesn’t shed any light on that.

In the end, I felt compelled to write this not because of the papyrus itself, but because I’m anticipating what our society will do with this discovery.  Sensationalist reporters, ill-informed skeptics, and questioning seekers will begin wondering if the Church’s view of the historical Jesus remains a legitimate option.  People will make speculations about Jesus being married to Mary Magdalene.  People will say the early Gospel writers attempted a cover up, and that the Church has carried on the cover up.  In light of the wild claims that will be forthcoming (despite Karen King’s best efforts to urge caution to the media), we as Christians have to be ready to give an answer for the hope that is within us.  The interest that this papyrus will spark stands as a great opportunity to share the true faith and to show the rich historical resources that Christianity possesses.  I hope this note equips you all to be more faithful witnesses in a culture of doubt.