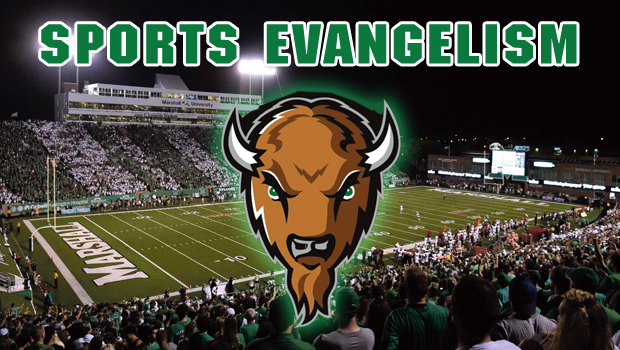 My pulpit for the evening.

HUNTINGTON – As I have been working through and with Sports Fan Outreach International (SFOI) to do open-air evangelism at the WVU games, I had a break in the schedule this weekend.  However, the Thundering Herd of Marshall University we home to take on Middle Tennessee University, so off to Huntington I went.

As with the first time at any new location, some of the time is to be spent doing recon.  Joan C. Edwards Stadium is situated nicely in the middle of a block of city streets and includes a handful of large tailgate lots.  I ended up setting up at a busy corner in front of the Rec Center.  Due to the weather, late night, and (sorry Marshall fans) a lackluster record, the crowd attendance was no the best.

I was able to open-air preach earlier in the evening.  As expected next to sports venues, the crowds came in spurts.  However, in between foot traffic, many cars were stopped bumper to bumper with their windows down which made for an additional audience.  Many in the cars tuned in to hear the Gospel message while waiting in traffic.

The rest of the evening was spent distributing several hundreds of Gospel tracts that I designed just for the game.  One perk of ministering at Marshall University games is that it is near my mother’s home.  So it was blessing to be able to minister with her for the first time.  She was a Gospel tract distributing machine catching folks on the opposite corner.

As we finished up and kickoff approached, we decided to head back to the car through the main tailgate lot.  We stopped at several tailgates and gave out even more Gospel tracts on the way back to our car.  All and all it was a great first evening at a new venue for me.  I look forward to returning sometime next year to continue the ministry here.