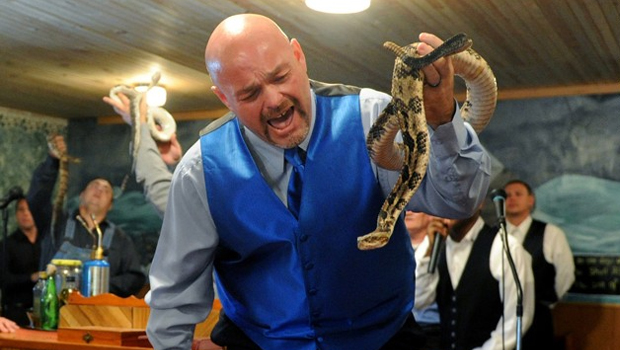 Sadly, the snake-handler didn’t fulfill any sign or prophecy, just a grave plot. On a positive note, he showed pastors and church members everywhere the need for proper hermeneutics and the importance of the declaration of the Gospel has front and center of the church’s efforts!

Perhaps one of the biggest problems that plagues the Evangelical church today is the lack of proper interpretation of the Bible. If you’ve been a Christian for any amount of time, you’ve probably have attended a home Bible study or two. And if you’ve attended home Bible studies, more often than not, you’ve probably heard something along the lines of, “…well this is what this verse means to me…” followed by another person who claims the same authority on their interpretation by proclaiming, “…but this is what this verse means to me…”

Usually in such situations everyone smiles and continues on in conversation either out of ignorance or complacency. Yet, what was just overlooked is the cause of many Christians being led astray or feeling left out in the cold when their real-life situation doesn’t match up to what they think the Bible says. When in reality, if they’d have applied some simple principles to properly interpret the scriptures in context, they would have found hope instead of uncertainty.

The Apostle Paul emphasizes such diligence in discerning the Word of God in that we, “…rightly handling the word of truth.” (2 Timothy 2:15). Such interpretation is called “hermeneutics”. Hermeneutics is described as, “the art and science of interpretation”. A reliable method therein taught in seminaries is the Grammatical Historical Method of interpretation. Simply, it teaches us to determine exactly what the author intended and how the original audience would have understood it. By taking that approach, we can avoid such misinterpretations as mentioned above and usually arrive at the same place in understanding.

Recently, a snake-handling pastor from National Geographic’s “Snake Salvation” Jamie Coots died from a rattlesnake bite suffered at his church the Full Gospel Tabernacle in Jesus Name Church in Middlesboro, KY. He was following a maligned tradition that follows a faulty interpretation of Mark 16:17-18. The passage reads:

“And these signs will accompany those who believe: in my name they will cast out demons; they will speak in new tongues; they will pick up serpents with their hands; and if they drink any deadly poison, it will not hurt them; they will lay their hands on the sick, and they will recover.” – Mark 16:17-18 ESV

The scripture where this originates (Mark 16:18) does not COMMAND snake handling. This would be better understood in light of Acts 28:3-6 where we see Christ’s words fulfilled as the Apostle Paul has kindled a fire and a viper bites him yet he is unharmed. Christ is referring to signs that the believer is not harmed. The same could be said for the next part of the verse that mentions the drinking of poison. Again, it does not COMMAND drinking of poison, yet it refers to if they are compelled to drink it by persecutors*, it shall not hurt them. This is evidenced as seen in ecclesiastical history.

Perhaps the worst part is the outward spiraling implications such an occurrence causes.  Consider the following points directly caused by and related to the misinterpretation of Mark 16:17-18.  When there is a bad hermeneutic you can expect:

Unfortunately, this practice is continuing to grow.

Sadly, the snake-handler didn’t fulfill any sign or prophecy, just a grave plot. On a positive note, he showed pastors and church members everywhere the need for proper hermeneutics and the importance of the declaration of the Gospel has front and center of the church’s efforts!  Moral of the story? Bad theology kills.

* – On a side note, the “prophet” Mohammad died after being poisoned…just sayin’…..