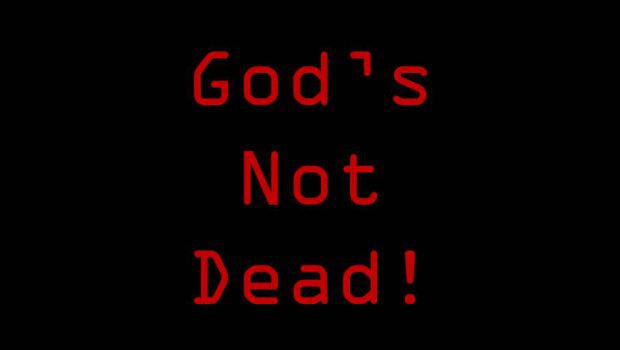 The movie God’s Not Dead has been an astounding box office success over the last couple of weeks.  This is encouraging, because a genuinely wholesome movie, produced on a low budget, and lacking any real “star power,” and opening in relatively few theaters has managed to draw a significant crowd.  The secular world is taking note.  And we as Christians are engaged in discussing yet another popular Christian film.

First, I want to say this is not a review of the movie per se.  I have seen the movie, I have read Rice Broock’s book that presents the evidence behind the movie.  I like the movie, and I especially like the book.  I encourage Christians everywhere to go see the movie, and better still to buy and discuss the book.

I have heard and seen many of the complaints about the movie.  Some of these are from the secular world, and use terms like “corny” or “cheesy.”  The secular world ALWAYS reacts this way to anything that seeks to glorify Christ as Lord.  We should feel free to disregard such trite and cliche criticisms that lack any meaningful content.  After all, these are the same people who think Ke$ha is actually talented.  Giving any credence to their aesthetic criticisms would be like taking advice from communists on how to have a free market.

But another set of criticisms, one worthy of a much more serious response, merits a much more serious response because it comes from fellow Christians.  We in the Evangelical world are apologetically challenged, and our culture knows it.  And when someone undertakes a serious apologetic, the first response of many Evangelicals is to diminish the need for apologetics, or the criticize the apologetic for methodical differences from one’s preferred approach.  It is this issue I want to address.

Let us do away with the idea that apologetics is optional.  The Bible commands us to give an apologetic, to defend the faith before a skeptical and watching world.  Take 1 Peter 3:15, for example; or perhaps Jude 3, Matthew 22:37, Colossians 2:2-3, Proverbs 1:7, John 1:1, 1 Corinthians 15:1-8, Philippians 1:7, or Acts 18:24-28, to name a few commands and examples.  If you are not undertaking to give a defense of the faith, you are quite simply not acting in obedience to Scripture.  The Bible does not suggest defending the faith, it does not say it’s acceptable for those that find it invigorating, it positively commands all Christians everywhere to give a defense (apologia = apologetic) for the faith.

Now many Christians agree that we must give a defense of the faith, we must engage in apologetics, but there is much disagreement about how to do that.  Hence, a movie like God’s Not Dead comes out and gets a mixed response from Christians not because we don’t want the Gospel defended and presented, but because we want it defended a particular way.  This is a question of apologetic method.

Thus, certain dear brothers in the faith think it is arrogant, the very epitome of human pride, to think we could possible put “God on trial.”  The idea of putting God on trial makes it seem like the defendant in a given case (sinful humans) can actually act as jurors before a righteous judge (God Himself).  This concern against pride is both understandable and necessary.  The idea that God has to meet the standards of modern jurisprudence, or conform to the conceptions of modern philosophy, is ridiculous.  After all, God happens to be God.  He IS the standard of truth itself, everything else should be conforming itself to the standard of truth revealed in God’s Word, not vice versa.

But with that said, apologist William Lane Craig has made a useful distinction, and one we apologists should always keep in mind:  There is a difference between how we know Christianity is true (through the self-authenticating witness of the Holy Spirit) and how we show Christianity to be true.  Our task as apologists is not to bring about conviction of the truth of Christianity, only the Holy Spirit can do that.  Our task is to present the Gospel and its defense in a way that is obedient to Christ, empowered by the Holy Spirit and in full obedience to Scripture itself.

To say we can show Christianity be true through reason and evidence is not to set a standard above God to which He must conform, but merely to recognize that God works through means in apologetics just as He does in evangelism.  God has created man in His image, and that includes man having rational capacities through which the world may be understood.  Apologetics is not using a flashlight to point out the sun, but telling someone who claims it is very dark to open their eyes before they make an evaluation.

Hence, when a movie and book like God’s Not Dead comes out, we should first evaluate it biblically.  And such evaluation should include recognizing the fact that, even if we disagree with the method of apologetics, we at least have begun to take the apologetic task seriously.  And it is always worth celebrating when God’s people are more faithful in obedience.  When we disagree with the method, we should do so with humility.  That is, classical apologetics versus presuppositional apologetics is not a first-order doctrine.  As Christians, we should not divide over differing apologetic methods.

Criticism has come from more evidential and classical apologists as well.  Some have pointed out that in the movie the arguments for God’s existence are not developed much, and the professor is far more radical than anything college students actually face.  Regarding the first charge, we are talking about a movie.  If you want to see the arguments developed in more depth, read the book.  It’s a great introductory apologetic work.

On the second charge, the atheist professor in the movie is a representative of the New Atheists.  The movie heavily targets the likes of Richard Dawkins and Stephen Hawking.  Are most philosophy professors New Atheists?  No, but the secular university is still rabidly anti-Christian, and the only people who can deny this are people who have spent no time whatsoever on a secular campus.  I say this as an affiliate staff member with a college ministry on a secular campus.  The intellectual challenges to the faith are real, and they are frequent.  And to be completely honest, we’re losing a lot of our students to secular philosophies and lifestyles.

In this context, I’m glad for a book like God’s Not Dead, and I’m glad for the publicity the movie will bring to serious Christian apologists like John Lennox.  I’m also glad for the conversations that Christians will be able to have with unbelievers who see this movie.  We need to take advantage of this opportunity to be salt and light in our culture.

The fact is, as Christians, all of us can agree with the message “God’s not dead!”  We stand against Nietzsche, Sartre, Dennett, Dawkins, Harris, Russell, Maher, and a slew of other atheists, both academic and popular, who have made a concerted effort to diminish the faith.  We stand on the shoulders of Chesterton, Lewis, Dostoevsky, Schaeffer, Craig, Moreland, Plantinga, Bahnsen, Strobel, Lennox, and a great many other Christian scholars who have sought to earnestly contend for the faith once for all passed on to the saints.

It is my desire to encourage all Christians everywhere to always be ready to give a reason for the hope that we have.  To that end, I want to encourage my readers to do exactly that.  Write a blog post or essay, or make a Youtube video, in which you defend the faith from a challenge that you view as significant.  Make this publicly available (maybe even send it to a local newspaper), and send me the link to it (jbat07@hotmail.com), with the subject “God’s Not Dead Challenge.”  Do this before May 15th.

I will select the three best entries, and reward them with the following:

The only conditions for participation, in addition to submitting the above by May 15th, is you must be a resident of North-Central West Virginia (college students are eligible), as I am not shipping these books all over the country.