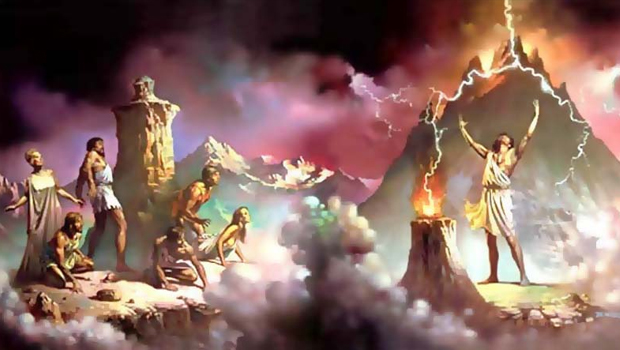 “And at noon Elijah mocked them, saying, “Cry aloud, for he is a god. Either he is musing, or he is relieving himself,” – the prophet Elijah to the prophets of Ball, 1 Kings 18:27

How boring would life be if we only spoke to one another with necessities?  How mundane would play-by-play sports be if sports announcers were replaced with the equivalent of the Emergency Response System robot voice?  That is exactly what we would have in our daily conversations without the crayon of the English language known as “sarcasm”.  I will be the first to admit that I have been guilty of using sarcasm inappropriately in the past (thankfully less and less as the Lord continues His sanctifying work in me).  However, I believe the Bible clearly shows that there are times when it is absolutely appropriate to use such an approach.  I’ve found that if we keep our intentions in the spirit of Ephesians 4:15, we can use sarcasm to effectively make a case.

Recently, I had posted a meme on my Facebook feed that quoted prosperity and word-faith “preacher” Joyce Meyer accompanied by the hashtag “theologyfail”.  The quote read, “The Bible isn’t enough. You need a personal revelation.”  We know that the canon of Scripture is closed and are even instructed not to add or take away from God’s word (Deuteronomy 4:2; 12:32, Proverbs 30:6, Revelation 22:19).

Another image that drew the ire of many saturated in easy-beliefism was one based on an advertisement for Charmin toilet
paper.  The name in the same format read “Charlatan” and pointed out the Gospel-less preaching of Joel Osteen.  Again, nothing personally derogatory, just a snarky way to point out what many are unable to see as he “preaches” what his followers want to hear, rather than what they need to hear (2 Timothy 4:3).

In both cases, truth was spoken, just in a colorful manner to draw more attention.  So was I wrong? Should I repent for mocking such false teachers?  Before you answer that, let’s see what, if any, examples there are in Scripture that present truth through the wonderful gift of sarcasm.

Elijah and the Prophets of Baal

Probably the best use of sarcasm in the entire Bible lies in the verses of 1 Kings 18.  We see the prophet Elijah giving an ultimatum of sorts to the people that Ahab gathers at Mount Caramel.  Elijah proclaims, “How long will you go limping between two different opinions? If the LORD is God, follow him; but if Baal, then follow him.” (1 Kings 18:21)  Elijah continues and challenges the 450 prophets of Baal to prove the legitimacy of their god.  The challenge was to lay two bulls out on wood.  And “the God who answers by fire, he is God.” (1 Kings 18:24)  As the prophets of Baal cried out, their false god did not answer as crying and moaning to him went on from morning to midday (1 Kings 18:26).  They were so distraught they even resorted to cutting themselves at one point (1 Kings 18:28).

Then, at the climax of their impotent belief, Elijah taunts  them to the point of mocking their god, “…saying, ‘Cry aloud, for he is a god. Either he is musing, or he is relieving himself,'” (1 Kings 18:27).  In modern terms, Elijah was quipping, “maybe your god can’t hear you because he’s in the bathroom”.  If that is not sarcasm in the form of righteous mockery, then I’m not sure what is.  The story concludes with the LORD answering Elijah’s call and wiping the false prophets out.

Another (ironically a contemporary of Elijah) who also was a prophet to Israel in the Northern Kingdom, was Micaiah.  King Ahab is trying to decide wheter to go to battle against Ramoth-gilead and knows that the other prophets are telling him what he wants to hear.  So he sends for Micaiah who is “of the LORD” (1 Kings 22:7-8).  He asks Micaiah and without hesitation, Micaiah lets his subtle, yet stinging sarcasm do the work of pointing to truth.   He gives the prophecy to “Go up and triumph; the LORD will give it into the hand of the king.”  (1 Kings 22:15).  Now if we read this in context, we see that King Ahab senses this prophecy for the truthful sarcasm that it is.  In other words, it’s like Micaiah mocking, “Sure… go ahead to battle.  The Lord will give it to you…” In fact, King Ahab is so irritated he tosses Micaiah in jail for his mockery (1 Kings 22:26-27).

In both cases, we see two bold believers standing on their faith in God and using righteous mockery to drive their point home.  Western Evangelism today has become so complacent, watered-down, and Gospel-impotent, we should all hop in this car called “reality” and see it for what it is and not be afraid to point it out from time to time. << – That was sarcasm. 😉