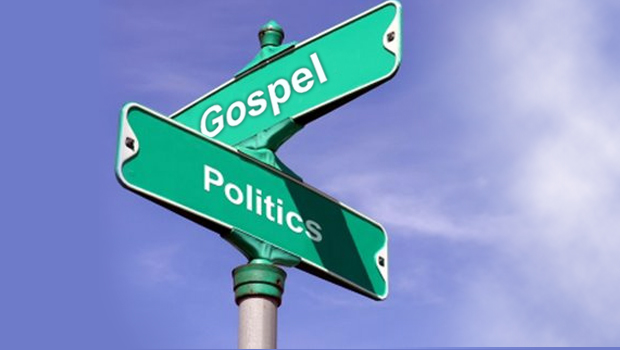 Trading the Gospel for Politics

Without the gospel everything is useless and vain – John Calvin

It’s a sign of the times.  We live in a “I want it now” society.  Text messages and emails govern our lives occupying much of our time due to their provision of instantaneous communication.  The faster something works, the better it sells.

This love of instant gratification, a form of pride, finds its roots in Christian evangelism dating all the way back to the 1730’s or 40’s.  What started as the “Mourner’s Seat”, made known in 1741 by a minister named Eleazar Wheelock, eventually evolved to the “Anxious Seat” by heretic Charles Finney, and finally to the powerless “sinner’s prayer” from Billy Sunday.  This instant method of evangelism is driven by either pride or ignorance to the Scriptures to see converts saved – immediately.

In other words, rather than laboring with a lost person through Scripture, regardless how long it takes, many today simply get a lost person to jump through a few hoops, pray a prayer, and then assure them they are saved.  As pride is a contributing factor, the primary cause in many cases is a loss of faith by the preacher or evangelist in the power of the Gospel.

Only the Gospel of Christ has the power to change people at their core.  Why do so many of us doubt the power of the Gospel (Romans 1:16)?  Why do we fail to understand that folks have to know the bad news before they can truly get a handle on the Good News (Galatians 3:24)?

Yet another iteration of this lack of faith in the power of the Gospel tainted my computer screen as I stumbled on to an article where Rev. Jesse Lee Peterson dismisses the power of the Gospel with a supposed “clever” end-around to trick those pursuing the homosexual agenda.  His solution is not only unbiblical but encourages the Christian to violate their very conscience in hopes that money will eventually win the day by accepting it for rendering services such as homosexual unions.  He tells Christians to “donate it to a conservative Christian law firm to fight against same-sex marriage? In other words, what if they took the sinners’ money and used it for good?”

What?! Yes you just read that correctly.  So using Rev. Peterson’s logic Christians should:

Yes those are a bit extreme, but they point out the foolishness of his idea.  There are a host of other scenarios beyond the scope of this post that could go wrong.

We’ve seen such a bad idea before where one of God’s people try to appease those openly practicing sin.  Genesis 19:8 finds Lot offering his own daughters to gratify the men of Sodom that were so insistent on having homosexual relationships with the two angels that were in his home.  Can you imagine?!  The wickedness of Sodom was so much that Lot had done the unthinkable.  Their desire for homosexual relations was so much that the Bible says after the angels blinded them and they were so persistent that they wore themselves out trying to get in (Genesis 19:11).  By God’s grace, Lot was prevented from making such a foolish decision.  A decision that is as foolish as this suggestion to appease the homosexual agenda and rely on fallible man to save the day.

Regardless how difficult it may be Christians are NEVER to compromise and give any sort of approval of such sin (Isaiah 5:20). Let’s pray that Rev. Peterson would consider the true power of the Gospel and cease to give such poor advice from the position of a religious authority.  Otherwise, we simply make lawyers rich while many continue on their way to hell.

The battle against darkness is won by the power of the Gospel, no the cleverness of man.