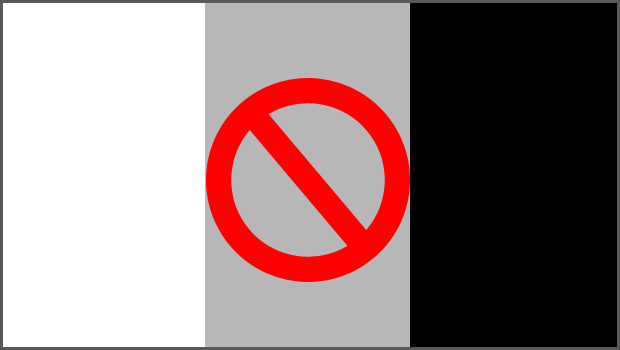 There Is No Grey Area

***DISCLAIMER***
I have not seen the movie ’50 Shades of Grey’ or read the book, nor do I plan on it.  Just as I don’t need to snort cocaine to see why drugs are bad or sleep with a prostitute to see why God condemns sexual immorality, one need not watch or read this to understand the perversion that it promotes.

As sexually-saturated as our culture as become, why the fuss over yet another soft pornographic movie skirting the NC-17 rating?  After all, there have been many films that graphically display such content, most even live at one’s fingertips in the late ours on cable television.  I remember back in the day when Cinemax was nicknamed ‘Skinamax’ after 10pm (not sure if it still does as we turned cable off 5 years ago).  I believe we are witnessing yet another level of man’s depravity and once we’ve landed on this step, ’50 Shades’ will be irrelevant compared to the next film that will have to push the R-rated barrier even closer to X-rated movies.

A wise preacher once pointed out that what is perversion for this generation becomes the norm for the next.  Do you disagree? As he puts it (paraphrased), “If we look at the trend of bathing suits today, nothing extravagant, something you can find at a local big box retailer, and compare it to what was acceptable say 50 years ago, we would see a stark difference.  If one were to wear a common bikini today back then, one would be arrested for either public lewdness or locked up in a mental institution because it would appear they were mad.”  What changed?  Did society just have an epiphany and all of the sudden a bathing suit with less material than a dishrag became rational?  No.  It is confirmation that what is perverse in this generation is accepted as the norm in the next generation.

Honestly, there has been so much written regarding ’50 Shades’ by much more qualified men than I that you should read (links below).  Yet I would like to point out a heart-breaking factoid that recently was discovered.  It shows the dire need of the Gospel of Christ in the state of West Virginia and is proof that the mission statement of the WV4G and its purpose are not in vain, nor exaggerated.

According to a recent poll taken by The Wrap (a site that follows Hollywood trends), West Virginia is the number one state anticipating the movie’s release this week.  And sadly, many of those in that poll and in the theater seats will be professing Christians.  That should make us weep.

The sad reality of professing Christians partaking in this movie is the rotten fruit harvest of Gospel-less preaching in our pulpits.  Christian Smith and Melinda Denton sum it up in a phrase they coined that describes this type of “preaching” called “moralistic therapeutic deism”.  Matt Chandler of The Village Church does a wonderful job explaining how it fleshes out.  And that rotten fruit that I mentioned manifests itself in professing Christians with just enough morality to soothe their conscience while they live in a fantasy of justifying such actions to live like the world.  Yet the God calls His followers to be holy (1 Peter 1:15-16).

The next logical step in this progression is a doctrine directly from the doorstep of Hell called “Carnal Christianity.”  Friend, there is no such thing.  To say that a person can be saved (that is regenerate), and still love and live in the ways of the flesh hiding conviction behind false justification is a lie and a slap in the face to the work Christ provided on that tree. When one is genuinely saved, God takes their heart of stone that loves this world and crushes it and replaces it with a new heart (Ezekiel 36:26).  That new heart will seek to love the things God loves and hate the things that God hates.  And though, sadly, a genuinely regenerate Christian will sin, he or she cannot stay there without conviction.  For as evidence of their salvation of repentance and faith (Mark 1:15), they will live a life of repentance.

The “carnal Christian” will continue to drink down the pleasures of the flesh and only give Christ a passing thought.  Whereas the genuine Christian will all but want to vomit the vileness of the sin they realize they are in and run back towards the cross at break-neck speed.

A great public example of the damnable doctrine of “carnal Christianity” was noticed on professed Christian and quarterback for the Seattle Seahawks, Russell Wilson’s Twitter feed.  He recently tweeted his praise for the movie:

“Thanks for the early showing of #50ShadesOfGrey late last night..… Great movie”

Besides a great example of why you or your children should not get your spiritual guidance from celebrities, it makes the case for this sickness of “carnal Christianity” all the more valid.  How else does one justify a Christian profession of faith with blatant praise for pornography?  What does darkness have to do with light (2 Corinthians 6:14-15)?

At the end of the day, we need to understand that a profession of faith by itself in Christ means absolutely nothing.  Shocked?  Consider that even the demons believe in Christ (James 2:19) and that statement doesn’t seem so outlandish does it?  At least the demons “shutter” at the mention of His name.

Allow me to offer an illustration to clarify this point. Let’s say that I was scheduled to preach at a church at 10am one Sunday morning.  After about 30 minutes of awkward uncertainty, I come hurrying in.  When the pastor asks where I’ve been, my excuse is that I had a flat tire and had to change it.  In the process of changing the tire, a lugnut rolled out into the roadway.  About the time I walked over to pick it up, a coal truck rounded the corner and hit me.  However, I managed to get back up, brush myself off and finish changing the tire.

Anyone with a lick of sense would know that I was lying.  Why?  If I were to be hit by a coal truck on one of WV’s fine back roads, there would not be enough of me to bury.  Now if that is the result of me having an encounter with a large, but simple truck, how much more of an impact would be experienced if that encounter was with the Creator of the universe?!!  You cannot be regenerated by the Holy Spirit and remain in your sin unconvicted.

The Solution: The Gospel

As with any defect in ourselves, the only lasting remedy with the power to truly change us is that which lies within the Gospel (Romans 1:16).  Through the Gospel we realize:

– there is understanding that no worldly desires will fill or satisfy us (Galatians 5:16-17)
– there is power of forgiveness for sexual sin (1 Peter 2:24)
– there is comfort for those who have been sexually abused (Isaiah 41:10)
– there is strength to resist sexual temptations (1 Corinthians 10:13)
– there is hope for marriages wounded by sexual infidelity through forgiveness (1 John 1:8-10)
– there is guidance for a young man or young woman navigating a sex-obsessed culture (James 1:5)

All of that understanding, power, comfort, strength, hope, and guidance can be found in only one place, the cross of Christ.  It is exclusively through the merit of the work done by Him on that tree that we can break these chains of sexual sin and temptation.

As for the church and her role in this mess, perhaps a recent quote states it best:

“No Grey Area” – The Gospel Coalition