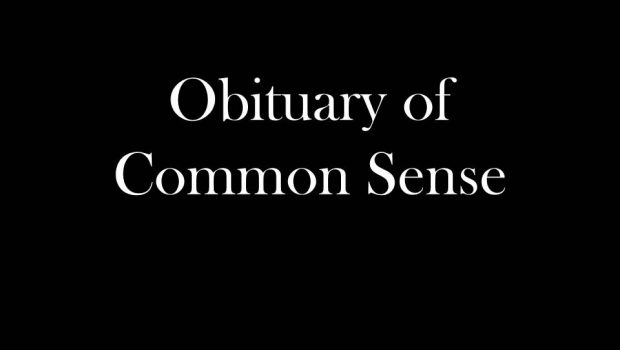 Common Sense, the keeper of self-evident reality, passed away quietly last night after a long struggle with stupidity, ignorance, and blistering pride.

Common Sense had a long and fulfilling life, having been a companion of such intellectual giants as Socrates, Augustine, Thomas Aquinas, Francis Bacon, Isaac Newton, and Galileo. Common Sense described feeling isolated and misunderstood in his later years of life, often saying “I just don’t have many friends anymore.”

Common Sense was first diagnosed with an infection of ignorance when Western culture accepted the fact that contradictory positions can simultaneously be true in the same sense, at the same time, and in the same place. While certain people attempted to save Common Sense from this infection by such means as education reform, they were hampered tremendously by an overwhelming population of people who just quit caring about rational thought.

As the infection progressed, stupidity set in and complicated the disease. It was no longer simply the case that people didn’t know basic facts like who the first president of the USA was or the difference between a solar and lunar calendar, people no longer cared that they did not know. When Common Sense tried to tell people such simple things as “History matters” or “A Google search is not science” he was met with a nonchalant shrug and utter indifference. When Common Sense suggested that the lyrics to most hit songs for the greater part of 20 years have merely been words devoid of any real significance of meaning, he was met with hostility and hospitalized after being beaten to within inches of his life.

Common Sense pressed on despite these difficulties, growing increasingly exasperated in a world that had unrivaled technological resources and unparalleled access to sound information, yet which used these blessings to pursue such ventures as Angry Birds and sharing videos of twerking.

Ultimately, Common Sense was killed by an overweening generation that could use a smart phone by the age of three, even as it could not define “truth,” or “reality” by the age of 50. Concerned with ultimate questions as he was, Common Sense suffered a stroke when his life support machine (which repeatedly recited the basic laws of logic) was replaced with a machine that played Kesha “music” on a loop.

In his last wishes, Common Sense stated that he hoped people would once again return to the days of having rationally grounded public discourse, of respecting those with whom you disagree, and recognizing that your personal feelings do not constitute reality.

Common Sense was preceded in death by his children, Civility and Decency. He is survived by his brother, Sophistry, and by Sophistry’s children Relativism and Political Correctness.

While a service was planned for Common Sense at an Episcopal Church, the church refused to rent its building to celebrate the life of someone they deemed far too intolerant and narrow-minded. Other venues have refused to hold a funeral service that they do not believe anyone will attend.