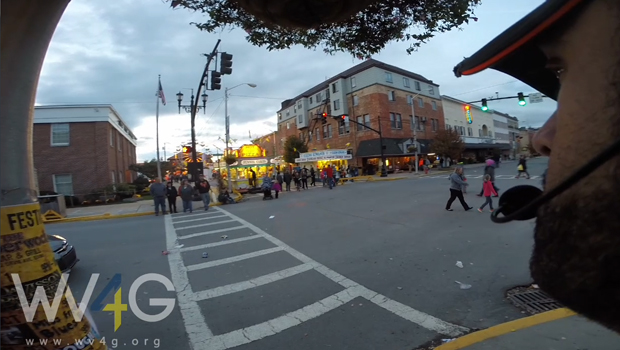 Praying with a lady in need after the Gospel call.

ELKINS – Though the forecast looked bleak at best, God opened a window for the Gospel of Christ to be heralded.  Not only was the weather cooperative, but a week before I received the green light from the Mayor of Elkins to use voice amplification.  As I monitored the weather from my secular job, I saw a 2 hour window on that Friday evening to preach just before the Fireman’s Parade.

Hoping for the best and trusting God, I packed my bag and headed to the Mountain State Forest Festival.  As I arrived, the rain began to let up a bit to a light drizzle and then stopped.  Over the next couple hours, I was able to cover the main stretch of the festival down Davis Ave.  By the time I finished, darkness had fallen, and the rain was beating my windshield as I left.  The cold however was displaced by the good-looking forecast for Saturday.

Saturday brought in sunshine and great anticipation and I had the entire day to cover the festival with God’s word.  With the exception of the feature parade that lasts a couple hours, it was a wide open canvas of lost people to paint with the Gospel.

Most of the open-air encounters were preached from Jeremiah 17:5-10 focusing on God’s view of man’s heart.  Many lost people trust their eternity on the very thing that will damn them when they stand before God, they trust in their heart (Jeremiah 17:9).  To further drive the point home and put a West Virginia Fall spin on it, I used the example of the beautiful leaves that are blanketing the mountains this time of year.  Though they may look vibrant, colorful, and full of life on the outside, they are actually dying.  Likewise, many walking around look great on the outside with the good looking relationships, nice job, cars, clothes, etc.  Yet inside, without a relationship with Christ they are spiritual dying.  This illustration seemed to connect with the people and started conversations off-camera.

During the entire time, there were only 2 hecklers that were sent at the exact perfect time of the sermon.  One was a proud, middle-aged man who mocked Christ and His saving work.  I openly called the man to repentance and told him that God will not be mocked.  Surprised that I heard him, he quickly ducked into the shadows of the evening.  Pray for him.

Another, heckler (in the first video below) can be seen shaking his head and laughing with his college friends.  As he smugly turned up his nose, I pleaded with him to come to repentance.  After he continued walking away, he not only brought attention to me, but gave me an opportunity to explain how God is calling even the most proud while holding back his wrath and how heinous it is to proudly refuse such a call.  The young group directly across the street came over and were very encouraging as they thanked me for standing for God’s word.

The second video below focused on man’s idea of works-righteousness.  Many people heard the Gospel call and listened from the shadows of the overhanging awnings of storefronts.

God definitely saved the best for last in the third video below (my favorite encounter).  As my voice was about to give out, I preached my last sermon Saturday night.  Two men that are seen to my right were seen at another street corner I was at earlier.  When they heard me begin, the showed up to hear the entire message.  But best of all, I’m thankful for God calling a lady to His message about 5 minutes in.  She sat in the crosswalk the entire time.  As I was packing up, she made her way over to me and God graciously allowed me to minister to her for about 25 minutes.  She is a recovering heroin addict and yearning for Christ.  I was able to share Gospel truths and give her a bible.  Pray for her.

You can find additional information in the video descriptions.