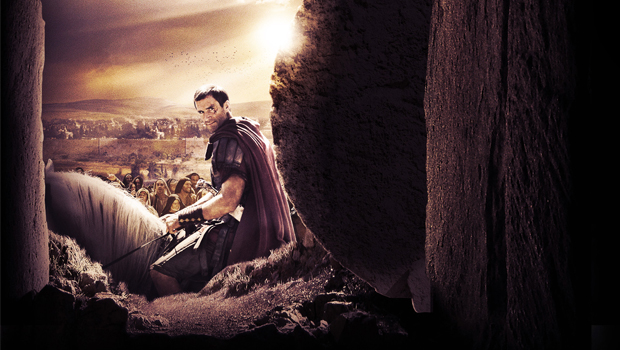 Summary: Be assured, even for the careful eye, you can leave the theater without your reformed blood pressure being Risen.

It’s not too often that Hollywood’s attempt to get into the Christian’s wallet is worth the film it’s shot on.  Noah and Exodus: Gods and Kings were horrific, if not blasphemous, takes on their true biblical counterparts.  Even movies created by Christians are not worth your hard earned money.  Whether it is the biblically inconsistent story of a child who is allowed to tell more about heaven than the Apostle Paul (Heaven is for Real) or the ridiculous notion of putting God on trial (God’s Not Dead, full explanation here), they are equally problematic. But not the same could be said for Risen.

With that in mind, after skimming a review from Answers in Genesis, I decided to take in Kevin Reynolds’ “Risen“.  In short, it is worth the Bible-believing Christian’s time and money.

The movie moves along at a reasonable pace picking up towards the end of the crucifixion scene. The Roman soldier in charge of the crucifixion detail, known as Clavius, is sent to hurry along the deaths at the crucifixion scene and order their legs to be broken (John 19:32-33).  As true to the Scriptures, both criminals legs were broken, but Christ was already dead and instead, His side pierced with a spear (John 19:34).   As unrest begins to set in, we see Caiaphas plotting with Pilate to have the tomb sealed in fear of the rumors of Christ’s body being stolen to confirm His message among his believers.

Rather than follow maligned Hollywood scripts to garner an extra buck by leaving question about basic Christian doctrines, Risen leaves no doubt about the resurrection of Jesus Christ.

As in the Bible, Jesus rises from the dead.  This is probably the single, best thing about the film, it absolutely affirms the resurrection of Christ.  Rather than follow maligned Hollywood scripts to garner a buck, Risen leaves no doubt about the resurrection of Jesus Christ.  From there, the rest of the movie focuses on the whereabouts of Christ.

As an admitted (and rightfully so) skeptic to Hollywood flicks about Christianity, Risen was refreshing.  The scenery, acting, musical score, tastefully showing of brutality without Mel Gibson invading the set with buckets of blood, and ascension scene were wonderful and transports the viewer back in time.

2 Overlooked Things to be Appreciated

FINALLY…. a more accurate portrayal of what Jesus may have looked like….

Risen absolutely blows up the modern-day, Western American Evan-jellyfish, effeminate “Jesus” with rosy cheeks, product in His hair, long flowing curls, a clear complexion, and wearing a woman’s gown.  At the risk of violating the 2nd Commandment (Exodus 20:4), for cinematic purposes, I really enjoyed the image of Jesus as a middle-Eastern man with imperfect facial features.  For me, it drives home the humanity of the hypostatic union of Christ.  Just as the in the Bible, this was the Christ who lived among sinners like you and I.

An interesting dynamic to the historical background of Pontius Pilate…

A little waltz through history and Roman rule, and one can see why Pilate was in such a precarious predicament when presented with the demand to execute Jesus.  He was under the thumbs of the Jews from the start.  From his failure to follow through on a threat to kill the Jews unless they ceased complaining about his idolatrous statues to the streets filling with rioters as he was caught stealing from the temple treasury to build needed aqueducts to his belligerent actions of eventually placing pictures of Emperor Tiberius in Herod’s palace, he was one bad decision away from having Rome come down on him should the Jews send word again.  Thus, the trial of Jesus before Pilate actually became the trial of Pilate before Jesus as he knew Christ was innocent.

That dynamic can be seen many times through the movie via Pilate’s character.  Whether intentional or not, the movie shows Pilate’s anxiety growing more and more as the arrival of the Emperor draws nearer.  Again, not a major theme, but a neat dynamic nonetheless.

The Only Things I’d Change are…

This is a completely personal preference, but I was distracted by the lead character Clavius.  He was played by Joseph Fiennes.  As some readers may know, Fiennes did a phenomenal job in as Martin Luther in the 2003 hit “Luther” (highly recommended).  He did such a good job of burning an iconic image of Luther into my mind that several times I kept thinking, “What’s Luther doing at the crucifixion?!”

An olive branch for Roman Catholics…

Of the many things that do not need affirmed are superstitions that run rampant and make their way into Christianity.  There is no place for superstition in Christianity.  God is sovereign, plain and simple.  As if there wasn’t enough unbiblical things to deal with in today’s landscape, the Shroud of Turin makes a cameo at the empty tomb.  During a scene where Clavius revisits the empty tomb looking for clues, he finds the Shroud of Turin.  Not something to make or break the movie and biblical themes, but a not-needed distraction for some such as myself.

Mary, Mary… Why ya’ buggin?… (<——throwback to old school friends reading this who will chuckle)

Though not explicitly stated in Scripture, Mary Magdalene is portrayed as a prostitute.  In one scene, several men identify “knowing” her when a roomful is asked.  The film takes the modern-day assumption, rather than leaving it at what the Scriptures defined as a woman who “had been healed of evil spirits and infirmities” (Luke 8:2).

Peter and especially Bartholomew were overly done as slap-happy, Middle-Eastern hippies who found love.  It would have been nice to see that toned down and more of them in awe of the risen Savior.

Perhaps a reformed fellow like me is overly sensitive to the seeker-friendly “gospel” given as “Jesus is love, love, love…”  After all, many well-intended churches today, especially in West Virginia, claim that is the Gospel message.  But this is not the Gospel.  Yes, Jesus is love.  However, that is a product of the Gospel.  Lest we forget no where in Scripture does it read, “God is love, love, love” or “God is mercy, mercy, mercy”.  While those are attributes of God they are not the same as what we read in Isaiah 6:3 which emphasizes He is “holy, holy, holy”.  We see much made of the “love Gospel” rather than the biblical Gospel of repentance and faith (Mark 1:15).

All in all, the movie was as well done as we can expect in today’s landscape of religious films.  Be assured, even for the careful eye, you can leave the theater without your reformed blood pressure being Risen…