When you think abo..." /> Signs in the Flowerbeds – West Virginia for the Gospel
Blogs 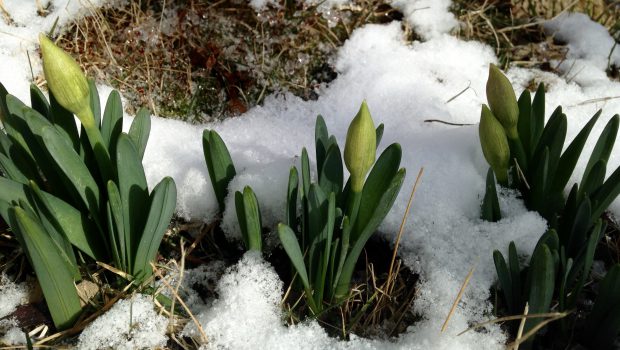 There is snow in the air and on the ground this April morning.

When you think about it, there are two very interesting times of year here in the West Virginia hills and both of them are eerily similar. They are both short, indicative of what is coming next, and feel almost exactly the same.  Yet despite their similarities, they have one distinct difference. They are occur at the almost exact opposite time of year and functionally indicate very different things.

These storied hills boast about our four very distinct seasons. Springs are breezy. Summers are hot. Autumns are a tapestry of color. Winters are cold and snow covered.  It’s quite a delightful place to live. West Virginia has often been called an “Outdoorsman’s Paradise.” If you love being outside in any or all weather, this is the place to be.

I’m immensely thankful for these distinct seasons for I remember back when I was a young punk just out of high school.  If I uttered the phrase “I gotta get outta here” once, not so subtly laced with teen angst, I said it 50,000 times. And outta here I got. My escape was to the Land of the Cheesesteak where I spent four years at 138 feet above sea level. I realized immediately that I had been missing the literal forest for the literal trees.  I’ll never forget my first Autumn drive back home and coming over the mountains and seeing all those colors. Nothing quite like it.

But, again, despite all of it’s distinction, there are two very interesting periods.  I don’t call them seasons because they aren’t long enough. They each occur within their own season, respectively. Though they occur at opposite seasons, what’s interesting is what they have in common.

Be honest. If I blindfolded you, spun you around in a circle three times completely disoriented your understanding of the time of year and threw you into one of these two periods, would you any idea what season you were coming out of and which you were going into? These two times function almost identically. Random temperatures. Random types of precipitation.  No leaves. Brownish grass. You would be left out in the middle of the field not knowing which way is Summer wondering, “What’s coming next? Winter or Spring? Is it going to get colder or warmer?” Because, by looking around during those two times of the year, there is no way of knowing where you are going or what is coming next.

I believe that the Church, not Church in America, mind you, but the Church catholic, the Universal Church, is in one of those two ambiguous times between the seasons. We’re not sure what’s next for Christ’s Bride. We’re not sure which way Summer is and if we’re heading into a bitter, colder winter where everything is going to move from bad to worse or if we’ve weathered the worst of it and we can start looking for life on the trees and signs in the flowerbeds.

The problem is, as it is with the weather, looking out the window is no indicator for the faithful in Christ to establish what’s next.  Therefore, many of us determine what’s coming next by the kind of day we’re having or what we see when we read the paper or watch the news. Again, recall the problem with these two times of year. It is 65 and sunny one day and you wake up the next morning to snow on the ground. Then, by the end of the day, the snow has melted and the temperature is back in the mid to upper 40s. There must be something more constant and consistent that can tell us what is in store for Christ’s Church.

You see, we must determine what seasons we are in between because that fact will inevitably regulate our behavior in the here and now. If I were to believe that in the next three months, we are going to experience warmer weather and the sun was going to be out longer, it would fundamentally change the way I acted today. I would pack away my winter clothes, get out my bermuda shorts, my Coppertone, and plan a weekend picnic with my family.

If the Church believes that nothing awaits her but pain, misery, death, and potential extinction, she is going to behave a certain way right now. However, if the Church believes that the days ahead will be better and brighter and the knowledge of the glory of the Lord will cover the earth as the water covers the sea in spite of what she sees out her stained glass window, it’s going to radically change the way she operates in the present.

What time is it? What awaits the Church in the future? Is the sun setting on her reign leaving us to only expect greater darkness or is it rising giving us hope that this is the darkest we should ever expect it to be again? Which direction is God taking the Church? Into colder and more perpetual winter or a resurrection spring of new life?

As Christians, we must allow Scripture, the very words of God, to tell us what time it is. We must allow God’s divine decree to inform us when we aren’t able to make sense of what we see out our front door. For if we don’t, while Aslan is melting the world of the White Witch, we run the risk of heedlessly slumping along all the while lamenting that there is still snow.

So in order for the faithful to know how to behave in the time being, the task of the Church is to realize what time it is as informed by God through His word to us.

“All the kings of the earth shall give you thanks, O LORD, for they have heard the words of your mouth, and they shall sing of the ways of the LORD, for great is the glory of the LORD.” (Psalm 138:4-5)

“It shall come to pass in the latter days that the mountain of the house of the LORD shall be established as the highest of the mountains, and shall be lifted up above the hills; and all the nations shall flow to it, and many peoples shall come, and say: ‘Come, let us go up to the mountain of the LORD, to the house of the God of Jacob, that he may teach us his ways and that we may walk in his paths.’ For out of Zion shall go the law, and the word of the LORD from Jerusalem. He shall judge between the nations, and shall decide disputes for many peoples; and they shall beat their swords into plowshares, and their spears into pruning hooks; nation shall not lift up sword against nation, neither shall they learn war anymore.” (Isaiah 2:2-4)

“The wolf shall dwell with the lamb, and the leopard shall lie down with the young goat, and the calf and the lion and the fattened calf together; and a little child shall lead them. The cow and the bear shall graze; their young shall lie down together; and the lion shall eat straw like the ox. The nursing child shall play over the hole of the cobra, and the weaned child shall put his hand on the adder’s den. They shall not hurt or destroy in all my holy mountain; for the earth shall be full of the knowledge of the LORD as the waters cover the sea. In that day the root of Jesse, who shall stand as a signal for the peoples—of him shall the nations inquire, and his resting place shall be glorious.” (Isaiah 11:6-10)

“And no longer shall each one teach his neighbor and each his brother, saying, ‘Know the LORD,’ for they shall all know me, from the least of them to the greatest, declares the LORD. For I will forgive their iniquity, and I will remember their sin no more.” (Jeremiah 31:34)

“And to him was given dominion and glory and a kingdom, that all peoples, nations, and languages should serve him” (Daniel 7:14)

God’s word reminds us Christians that we are playing the long game. We must abandon the short game tactics we’ve been using for so long thinking that the game is almost over. It’s only the bottom of the 2nd.

So what time is it? It’s almost Spring.