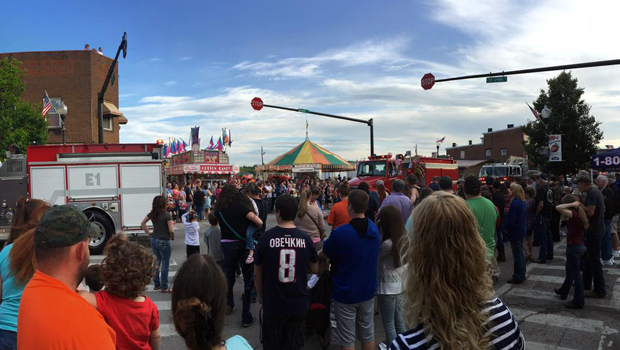 The more one ministers on the streets meeting people where they are, the better one sees the mess is the ministry.  These are the down-trodden, the sick, the heavy laden, the hopeless – these are the forgotten people who live beyond the comfort zone of the stained glass.

BUCKHANNON, WV – The weather held out and temps were perfect for an evening of heralding God’s word.  We arrived at the 2016 WV Strawberry Festival just as the Firemen’s Parade was getting underway.  After some creative navigating of the back alleys of downtown Buckhannon, we found a parking spot and headed out to find a street corner.  Part of the beauty of open-air evangelism is that you just need a place, people, and a Bible.  It’s eloquently simple and eliminates a myriad of things that can go wrong as opposed to ministries built on gimmicks and not the Gospel.

Our time was well received by most, with a heckler or someone snearing at the Gospel here and there.  During the first message, a man approached and remained the entire time.  While listening to the Gospel message, one of the team prayed as the Gospel was heralded.  Afterwards, he approached me and after explaining his desperate situation, he asked me to pray with him.

His name was Jeremy.  Within the past few months he had buried one of his children and was a single father to the one who he had with him.  If that wasn’t enough, due to his disability he was unable to hold down a job and was confident he had eviction papers waiting for him when he returned home due to lack of finances.  He claimed to know Christ and was cautiously optimistic that God will come through one way or another.  I prayed with him, we gave him a Bible, and he went on his way. Please pray for Jeremy.

These are the people you meet out on the streets.  The more one ministers on the streets meeting people where they are, the better one sees the mess is the ministry.  These are the down-trodden, the sick, the heavy laden, the hopeless – these are the forgotten people who live beyond the comfort zone of the stained glass.

My little evangelists in the making handing out Gospel tracts.

After sharing a few encouraging passages with him from Scripture, it was on to hand out Gospel tracts to others passing by.  These types of events with a family environment are great opportunities to train up your children.  It’s a blessing to see your children join you in laboring for the Kingdom.

Soon, Main Street would be bouncing with the sounds of a few bands for the evening.  So without delay, back on the box I went.  Both messages I preached focused on outer appearances and works often mistakenly used in a vain attempt for one to earn his or her salvation.  As with most festivals, I try to bring out an illustration that is related to the event that folks will remember.  In this case, I pointed out that the strawberry was the only fruit with the seeds on the outside.  And like a strawberry, many of us have placed all our good works and deeds on the outside and look good by appearance.  But inside there is nothing.  And inside is where God looks.  The illustration seemed to connect and garner attention.

After my second time on the box, a few young men were hanging around and asking a few questions.  They were believers and it was encouraging for 2 reasons.  First, they were encouraging because most of the time the interference and/or obstacles an open-air preacher will face is from professed Christians themselves! They were appreciative and inquisitive about it all.  Second, it was encouraging to know that the next generation is not totally lost.  As long as there’s young men and women like these two, there is hope.