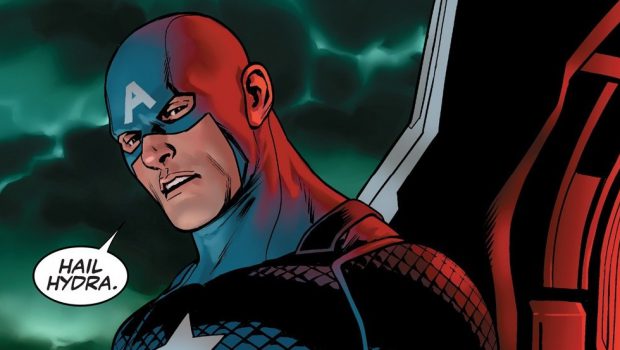 Among comic book characters, few are more trustworthy or have greater moral fortitude than Captain America. In an age of relativism, he is one of very few popular characters that stands on transcendent and unchanging moral principles. He represents ethical monotheism, and his statement that there is only one God in The Avengers drew widespread attention. He was created to represent what was best about America, to counter Nazi ideals and triumph over them by means of truth and goodness.

Yet this week Marvel has led us all to believe that Captain America (in the person of Steve Rogers) is a Hydra agent, an undercover member of the very organization he has opposed for 75 years, that he actually upholds and supports the opposite of all the ideals we thought he embodied. This revelation shocked and angered many of us.

Marvel editor Tom Brevoort did an interview with Time, which you can read here, and he explained part of the rationale for this decision:

“We try to write comics in 2016 that are about the world and the zeitgeist of 2016, particularly in Captain America. Nick Spencer, the writer, is very politically active. He’s a Capitol Hill head and following this election very closely. So we can talk about political issues in a metaphoric way. That’s what gives our stories weight and meat to them. Any parallels you have seen to situations real or imagined, living or dead, is probably intentional but metaphorically not literally.”

“There should be a feeling of horror or unsettledness at the idea that somebody like this can secretly be part of this organization… You should feel uneasy about the fact that everything you know and love about Steve Rogers can be upended.”

While as a Captain America fan I do not relish the thought that he is and always has been a member of Hydra (indeed, I find it infuriating on many levels), I do understand the rationale at play here. And I believe it reflects something that we need to consider.

I say this because every culture centers on what it worships. And comics are simply one reflection of the dominant worldview in our society. But they are an insightful one. I can tell a lot about someone politically and morally by whether they are #TeamCap or #TeamStark. The reflection we are seeing is not good, and we need something as drastic as Captain America being a Hydra agent to shock us out of our stupor and make us reflect seriously on reality. We, the USA, have lost the ideals and virtues that made Steve Rogers. It only makes sense that Steve Rogers would also lose them given that he is only a shadow of the reality of America.

I do not say all of this in order to present people with political solutions, or to advocate for one candidate or another. We must remember that it is often those making the most boisterous claims who are the least trustworthy. As Christians, we know the loss of our national moral center is not a political issue but a spiritual one. Captain America and Hydra are not real, but the ideals they represent are. And when a nation’s ideals become corrupted, they must be restored by God working repentance in that nation.

My call is not to a political party or a candidate. My call is to repentance. As a nation collectively and as persons individually we must believe the Gospel and repent. Our moral situation is one of idealizing sin and wickedness, and hating goodness and righteousness. What we need is a fundamental change of heart, which only takes place by the work of the Holy Spirit in the hearts and lives of people. Our nation is marked by sin, and sin is remitted through the death, burial, and resurrection of the Lord Jesus Christ. There is no other salvation and no other hope. Turn from sin and believe the Gospel.

Christians, we must not be passive. We cannot sit idly by as sin destroys us, our neighbors, and our nation from within. We are the salt and light. Our current cultural situation is a clear indication of how much we have lost our saltiness. We need repentance in the church before we can expect it in the world.