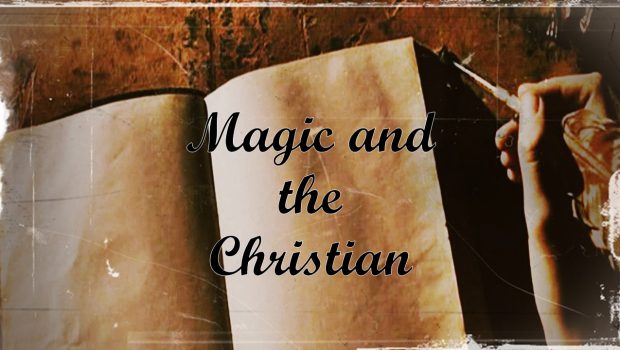 One area American Evangelicals need to grow in is thinking more deeply, and not thinking so much. I know this may seem contradictory, but only on the surface.

What I mean is we need to grow in thinking more deeply about things that actually matter. And we need to stop spending so much time thinking and debating about things that do not. We need to think more deeply about worldview questions and their implications in our culture. We need to spend less time micro-analyzing everything that might represent some disagreement on a second or third-tier issue.

As an example, I would like to consider the question of magic and its portrayal in popular forms of entertainment (movies, books, TV shows, board and card games, video games, etc.). There tend to be two popular Christian responses to this, neither of which do I think is quite right. The first response is that because magic is forbidden in the Bible (Leviticus 19:31, Revelation 21:8, 1 John 4:1), we as Christians should not consume any form of entertainment that entails magic.

This response has some things going for it, namely that it takes the Bible seriously and actively seeks to live out biblical teachings. I wouldn’t say this approach is wrong, though I do think this approach is incomplete.

The second approach is to say that because entertainment does not entail performing any sort of magic, there is nothing at all wrong with consuming entertainment that includes magic.

This response also has a few things going for it, namely it reminds us of robust Christian liberty (James 4:12, 1 Peter 2:16). It also correctly distinguishes reality from fiction. The Bible does forbid sorcery, consulting mediums, and necromancy. But it does not forbid the portrayal of consulting mediums, in fact the Bible itself records such events (1 Samuel 28).

Thus the difficulty we as Christians face in the evaluation of magic in entertainment is two-fold: 1. The Bible clearly forbids magic; and 2. The Bible portrays magic (though always in a negative light). Simply cutting out anything that portrays magic, fictional or otherwise, strikes against the second fact; but enthusiastically consuming magic in our entertainment seems to strike against the first. What is a good Christian to do?

I know it may seem like I’m speaking in riddles. So let me makes some things clear. We must interpret unclear biblical passages in light of clear ones. We must recognize that Scripture is perfect and complete, and in no way does it contradict itself; any problem we see between biblical teachings is in us and not in the text. Finally, we must recognize that while every biblical passage is limited in its meaning, it is nearly unlimited in its applications.

Applied to how we evaluate magic in entertainment, let’s think about the popular example of The Chronicles of Narnia. I can, in good conscience, say that if you cannot see the Christian themes that permeate these books you are a pinhead. I can also say, in equally good conscience, that if you make fun of a Christian believer who expresses discomfort at the idea of magic in Christian literature you are equally a pinhead.

What am I getting at? I am getting at the fact that we often have merely verbal disputes. The “magic” portrayed in Narnia is not at all sort of thing forbidden in the Bible (except the magic in Narnia performed by expressly bad characters, that is certainly forbidden). Am I suggesting there is good magic and bad magic? Not at all (at least not assuming the normal connotations of that word in modern Christianity). What I am suggesting is there are good worldviews and bad worldviews. I am also suggesting a word like “magic” can have multiple meanings. If “magic” means “supernatural power” (which a quick Google search reveals is a possible meaning) then we as Christians believe in magic more than anyone. God is supernatural, He is active in the world, and some people might use the term “magic” to describe that.

The difficulty, of course, comes with the other meanings of “magic.” That is, magic is also used to describe sorcery, witchcraft, necromancy, and so on. So we as Christians shy away from “magic” because of these negative connotations. But the true “magic” in Narnia has nothing to do with such wickedness, and instead has everything to do with Aslan’s intervention, work, and control of the world. There is a theological word for the sort of “magic” we see positively portrayed in Narnia, and that word is “sovereignty.”

This brings us to my original point, that we as Christians need to think more deeply about what really matters, and less deeply about what is secondary. The word “magic” is secondary. We do not believe in any of that name-it claim-it hocus pocus. A word like “magic” has no inherent meaning, much less does it have any inherent power. What is fundamental and primary is the worldview. The source of true magic in Narnia is God (aka Aslan). The hags, witches, and warlocks of Narnia also use “magic,” but the source of their power is evil in nature. The problem is not with the word “magic.” The problem is with the source of power, because as Christians we know that not all supernatural entities are good.

When we as Christians think about magic, we need to move beyond simply asking “Is there magic in this book (or show, movie, etc.)?” We need to start asking “What is the source of this magic? What is the worldview assumption behind this magic? Does this portrayal obscure the difference between good and evil?” Once we start asking questions like this, and answering them biblically, we will be in a better position to evaluate magic in entertainment.

One of the things we will quickly discover, I believe, is that the worldview behind much of the magic portrayed in popular culture is not some form of satanism, but rather a form of naturalism. The belief that the world works impersonally in a certain way, and that by repeating certain rituals we can utilize the world’s resources and power for our own purposes is the underlying worldview of modern science, and coincidentally of ancient sorcerers. My problem with the Harry Potter series is not that there is too much magic, it is that there is essentially no supernatural power at all. I do not fear that children reading Harry Potter will become satanists, I fear they will become naturalists.