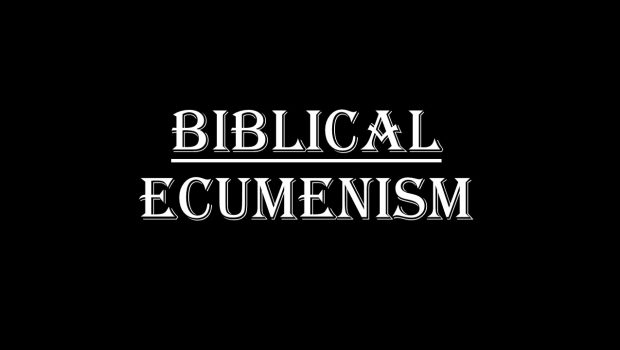 One painfully obvious mark of modern Christianity is division. Theologically speaking, we Protestants have about 20 or so doctrinal/liturgical traditions that represent thousands of different and distinct organizations classified as denominations. Interestingly, there is no shortage of apologists for our Protestant liturgical melee. Denominational variety is good, we are told, so that everyone can find a denomination that suites their needs or wants.

This thinking is sinfully anti-biblical. There are biblical reasons for leaving a professing “church” or “denomination,” but we have been utterly careless in our application of them. Additionally, the pattern of Scripture in both the Old and New Testaments indicates that the people of God are to be marked by a clear and unmistakable unity. Ancient Israel did not have a plurality of priesthoods and temples all serving the one true God. Ancient Israel had one priesthood, one center of worship, one faith; a pattern which was frequently disrupted by sin and idolatry, but a normative pattern for them nonetheless.

In the New Testament, the physical organization of the Church admittedly seems a little less clear. But there are a few things we know with certainty. First, the Apostles provided clear leadership to the early church as they were led by the Spirit (Acts 2:42, Acts 15, 1 Corinthians 15:1-8, Ephesians 2:20). Second, Apostles and apostolic workers ordained elders/presbyters/bishops at local churches (Acts 14:23, Ephesians 4:11-12, Titus 1:5). Third, the New Testament frequently rebukes disunity, and positively exhorts the churches and believers toward unity (1 Corinthians 3:3-11, John 17:21-22, Philippians 4:2-3, Romans 16:17). Fourth, and finally, the purpose of leaders in the church is to train the saints for ministry, and to do this in such a way that believers reach unity in the faith and the knowledge of Christ (Ephesians 4:11-13).

It is this last point which has weighed heavily on my mind lately. To be honest, I am very dissatisfied with where we are at (I am speaking of the church and professing Christians generally). It is as if 500 years after the Reformation started we are content to live in our own Protestant bubble and ignore the fact that professing Christians are divided into at least three major “churches” or groups of churches (Roman Catholic, Orthodox, and Protestant). After the goal was to reform the Roman Catholic Church, we have given up on any attempt at unity, not merely with Rome, but with other Protestants as well.

I need to clarify that last paragraph. There is a type of ecumenism with which biblical Christians should have nothing to do. Those who think Christianity can accept the doctrinal and worldview claims of other religions (like Islam, Hinduism, Sikhism, Jainism, Judaism, etc.) are completely out of line, are ignoring the clear teaching of Scripture, and need to be rebuked for their disobedience and compromise. Yet at the same time there is a form of ecumenism we desperately need, a biblical ecumenism. Biblical ecumenism boldly proclaims the remission of sins through the death, burial and resurrection of Jesus Christ alone. Yet biblical ecumenism acknowledges that inside of the Body of Christ there is room for disagreement and diversity on secondary doctrinal issues. Biblical ecumenism acknowledges that the teachings of Christ and the Apostles leave no room for our radical denominationalism at the expense of the mission of God. Biblical ecumenism demands we take the biblical teachings on unity very seriously, and that we carefully and critically reevaluate our current denominationalism based on these same biblical teachings.

The prevailing view that it is acceptable to divide a church and denomination for any reason or no reason at all is a positive denial of the sufficiency and authority of Scripture in regard to the doctrine of the Church. It is fed by a radical individualism that could only prevail in the last few hundred years of Western society. The view that you can (and should) simply choose whatever church suits your fancy turns church membership and attendance into a crude form of consumerism.

I am not suggesting that we Protestants should abandon our churches and join the nearest Orthodox or Catholic diocese. The fact is Rome kicked us out, we were not trying to leave. What I am suggesting is that, after 500 years, it is past time to begin examining the Scriptures and articulating exactly what needs to happen for us to attain the unity in the faith and in the knowledge of God’s Son discussed in Ephesians 4. I am not suggesting we compromise on any essential doctrines. But if what divides us truly is essential we have a positive biblical duty to correct and rebuke, or to heed correction and rebuke if any unbiblical division is coming from us.

In days long past, divisions which were in some cases less serious than those that mark the Protestant, Orthodox, and Catholic churches were resolved by great church councils, ecumenical councils. We have no such councils today, and we do not have the possibility of them due to the nature of the divisions which now mark us. But we do have the need for such councils today, because our current state of disunity is a disgrace before the watching world, and a major hindrance to greater obedience to the commands and teachings of Christ.

I am resolved to fight for a biblical ecumenism.