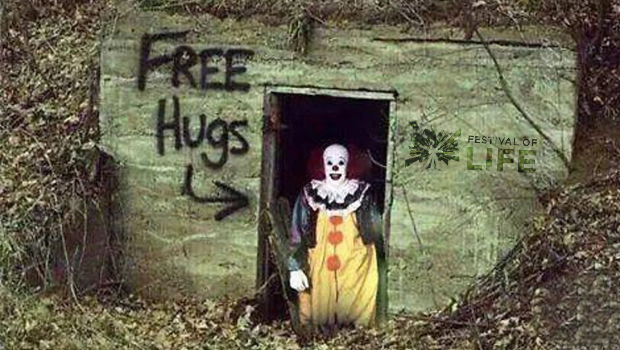 Last year, we took on the fraudulent Festival of Life (FOL) held the the Veteran’s Park sadly sponsored by a local church, Center Branch Assembly of God.  With well-researched facts, we exposed the truth of the false teachings primarily from Jonathan Shuttlesworth (read it here).  This is an update detailing more of the shenanigans of the event.

CLARKSBURG – As expected, when darkness of this scope and size are exposed there is significant pushback.  We heard everything from the go to “thou shall not judge” to the always fun “Pharisee” card.  Yet, when pressed, none of the defenders of this cacophony of chaos could make their case from Scripture.

Lies That No One Remembers

While it has support from Christians who understand very little Scripture, they are some of the most vocal when it comes to defending it.  Yet they are so blinded by big crowds, fanfare, and their childish fantasies that the Holy Spirit is moving because the lights and music are tugging at heartstrings, they conveniently fail to remember the lies from last year.

Though there are many, the biggest lie that sticks out is Mr. Shuttlesworth’s supposed prophecy that he had a word from God that he was here and was going to put an end to the heroin epidemic in Harrison Country and North Central WV.  Turn on the news any given evening and you will see overdose after overdose.  In fact, the heroin deaths have gotten worse since this circus was in town.  What does the Bible say about such an occurrence?

when a prophet speaks in the name of the LORD, if the word does not come to pass or come true, that is a word that the LORD has not spoken; the prophet has spoken it presumptuously. You need not be afraid of him. – Deuteronomy 18:22

Like any work of the devil, the truth is usually right in front of us, but cleverly masked.

Come for the Prizes, Stay for the Show

The marketing for this tragedy is typical of many “outreaches” in the Christian community today. The FOL uses bait and switch marketing so good it makes newspaper advertisement creators jealous.  Like any work of the devil, the truth is usually right in front of us, but cleverly masked.  You’ll see flyers littering (literally) parking lots, cars (which is illegal), and telephone poles.  You will find the name of Christ NO WHERE on these ads. But you will find extravagant offerings like “free bill pay”, video game consoles, TVs, and this year to sucker in even more, they’re giving away a car.

The truth is that organizers and victims alike are ignorant of 2 Corinthians 7:10.  This is at the heart of this event’s failure.  Let’s look at the Scripture (emphasis added):

So we see here that worldly grief leads to death.  What is worldly grief? The FOL organizers know.  That is how they set the hook in the mouths of the victims they lure in – especially those in poverty.  They prey on people focusing on worldly grief.  During the FOL show, it’s the same mantra…

Come to Jesus to get….
– a bigger house
– a better car
– a financial blessing
– a better marriage
– a [whatever you want made better]

The FOL promotes God as nothing more than a means to an end.  He’s degraded to a cosmic genie in a bottle, rather than the righteous, holy King whom we have sinned against.  If one comes to Christ for any of these worldly things, that is idolatry! One should come to Christ simply for the sake of Christ!  He enough.  He is more than enough.

The Festival of Life promotes God as nothing more than a means to an end.  He’s degraded to a cosmic genie in a bottle, rather than the righteous, holy King whom we have sinned against.

So what leads to salvation? Look at the first part of this verse.  It is godly grief produces a REPENTANCE that leads to SALVATION without regret. How do we experience godly grief? We are taught the Gospel of Christ.  We are confronted with our sin before a holy and righteous God (Romans 3:23).  We rightly understand that we deserve God’s wrath and nothing more.  But because God is love (1 John 4:8), He provided an escape for us through His Son Jesus Christ.

You can listen to a sermon on 2 Corinthians 7:10 here:

The false prophecies, bait and switch tactics, and worldly grief are just the introductory layers to the FOL show.  The next layer has finally been exposed and the supporters of this show are absolutely silent about it.

Just like the mouthpieces of Satan on TBN with their false healings as they walk around and punch, smack, and shove people claiming they’ve achieved some great spiritual feat, FOL wolves can’t be outdone in that area either.

***WARNING*** The video you are about to view will cause feelings of disgust, sadness, anger, and indignation to say the least.  The lady in the video is a practicing lesbian.

The charlatan (not Jonathan Shuttlesworth, but another one), begins by offering foolish psychic babble you can find at the nearest fair or festival.  These are usually general statements that would probably be true for most.  But with the lights and music setting the ambiance, it must be the Holy Spirit!

Then he dabbles around the idea of generational curses telling the lady, “…the spirit that’s attacking you is attacking her…. all I gotta do is get you healed and she’ll be fine” (2:22 mark).

And for the encore, in true TBN fashion, he summons his best Benny Hinn and “HO!!” shoves her and supposedly makes her sin go from her.

In her own words on her Facebook page, she admits she just went along with it and is still a practicing homosexual, no change whatsoever.  So at the end of the FOL show this night, we have a lesbian walking away still in her sin, our precious Lord and Savior being mocked by others as he evidently wasn’t powerful enough to save this woman, and several people fooled by the show.

But It Gets Worse…

It is absolutely heartbreaking to see this in the community.  The most loving thing we can do is to warn our neighbors of the trap that lies before them in wait.  We must warn them and share the Gospel of Christ with them.  You could take all the false teachings, false prophecies, false healings, and the like and wrap them all up together and it still wouldn’t be the worst part.  The worst part is the plague of flu-shot evangelism that cons folks into repeating a prayer, walking an aisle, or simply raising a hand as the wolf on stage popishly pronounces those participants “saved” or “born again”.

The true tragedy happens after the lights go down and the charlatans go back to their quarters for the evening to count their money.  That’s when people leave with the false sense of security that just because they did some action, they magically have eternal life and by and large they simply go back to living how they were.  No change. No repentance. No saving faith.  These folks are walking around feeling secure about their eternity for all the wrong reasons.

The number of professing Christians attending the Festival of Life is directly proportional to the lack of understanding of the Bible and evidence of the lack of Gospel being preached in the pulpits.

Pastor, are you listening? Do you know where your sheep are tonight?