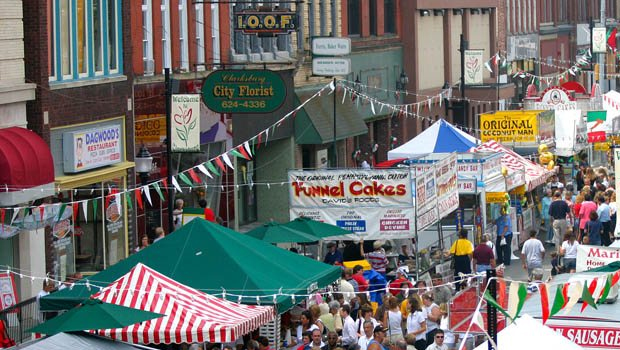 CLARKSBURG – September 4, 2015 marked the opening of the 37th West Virginia Italian Heritage Festival.  While earlier in the day it looked promising, storms with thunder and lightning quickly rolled in.  After waiting for a few hours, we were able to do a little street preaching as the late night crowds started rolling back in.

Though the crowd looks sparse, collectively many folks heard the Gospel in passing.  Additionally, there’s a few parts of the video where you’ll see some folks hanging around in the distance. It didn’t show up on video, but their faces showed interest the time they were there.  Only one heckler walked by with is drive-by remark about Jesus coming from Greek mythology. Yet he wouldn’t stick around as I asked him to come back and talk with us.  A a 6ft cross with the worlds “Are You Ready?” caused some folks give it a double-take when they see those 3 sometimes haunting words.

We launched from Psalm 33:

The Lord looks down from heaven;
he sees all the children of man;
from where he sits enthroned he looks out
on all the inhabitants of the earth,
he who fashions the hearts of them all
and observes all their deeds.