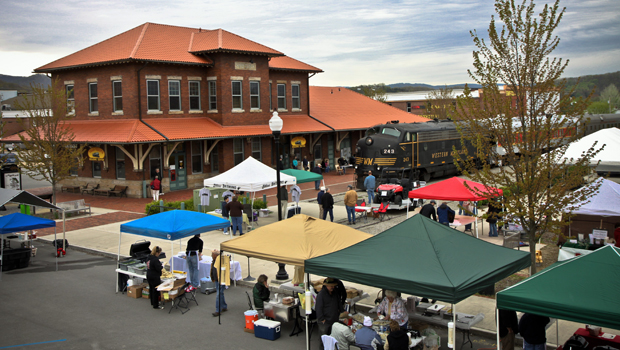 ELKINS, WV – April showers may bring May flowers, but they also produce wild onions known as “ramps”.  Ushering in the 2016 season of festivals in West Virginia is the annual Ramps and Rail Festival in downtown Elkins, WV.  The festival is in its 8th year and usually attracts around 2,000 people.  It is held at the Elkins Depot Welcome Center.

By God’s grace the weather held out for our time there.  The day was overcast and pleasantly warm with a breeze from time to time.  As the food vendors fired up their stoves and the unmistakable aroma of ramps filled the air, we set up at the corner across from the welcome center on the backside of the festival.  This would allow us to be heard by bystanders across the street and placed us in the path of foot traffic coming and going from the festival. It also ensured we could be heard as the welcome center served as a barrier from the bands playing on the other side.

While others from my church’s street team passed out paper missionaries (Gospel tracts) and had Gospel conversations, I set up on the corner and heralded the Gospel message to those within earshot.  Since a big attraction at the festival is the train station located within the welcome center, I used it as an illustration of people’s lives and where they were headed.  Through each message I wove the idea of considering which path was being followed.  The train posed a great visual for asking the question, “Which rail or path are you on?” I then further expounded that just as the train is only going one way on one track, likewise our lives are only headed in one direction.  Either we are headed to eternal tragedy or eternal joy.  And like the rails, there’s no way to be going in more than the one direction that train is travelling on.  I preached from Proverbs 14:12, Romans 3:23-27, Jeremiah 17:9, and John 3:16.

Elkins is a unique mix of people, from hippies to hipsters, the wealthy to the poor – there are folks from all walks of life.  Being in an Appalachian town also fosters many addicts as drugs are an ever-growing plague blooming in rural areas that are hidden from everyday life.  Our street team was able to talk with a recovering addict named Henry.  He is homeless and jobless, but claims Christ as his Savior.  Please pray for Henry that God may work in his life.

All and all, 5 Gospel messages were preached and over 500 paper missionaries were given out.  Additionally, the Holy Spirit drew us to a few folks across the street whom we gave Bibles to trusting in God’s sovereignty.  We even met an older saint who was a street preacher himself that comes to Elkins in the summer and travels around the East coast using Elkins as his home base.  He was appreciative of our work and felt like an old-time friend after just a brief conversation.