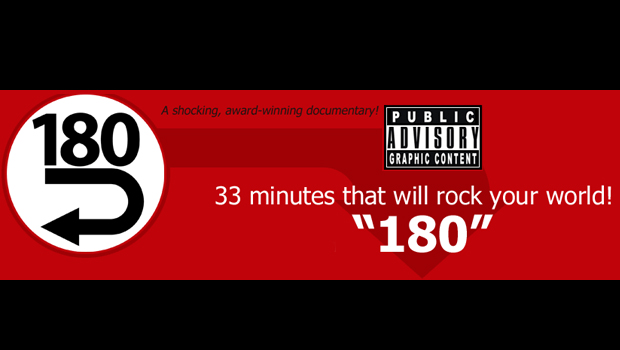 Summary: Ray Comfort and crew will challenge the Christian to take action against the slaughter of unborn babies in this 33 min. documentary.

Ray Comfort released a short film entitled “180”. Short, and to the point, the film documents interviews with pro-abortion/pro-choice people who quickly change their mind.  What changes their mind?  Well, you’ll have to watch the film below to see, but I’ll give you a hint.  What magnificent tragedy occurred less than a hundred years ago that parallels the issue of abortion today?  Watch to find out.

The film itself overall is done well.  Unlike many documentaries with an agenda, the dialogue is open, honest and allows real responses from real people.  Whenever you can get a point across and allow the key elements of the film to speak for themselves, unscripted in real-world situations, there is an authenticity to the film that lends itself to believability.  The only blatant editing is for profane language or gestures.

The only criticism I could offer would be that it seems to try and squeeze two agendas into a timeslot built for one.  On one hand there is the goal of explaining why abortion is wrong.  On the other, is the Gospel of Christ to see the lost saved.  The Gospel is the only thing with the saving power to change people, not just clever dialogue.  I have always been a fan of Ray Comfort’s witnessing technique.  However, it is hard to squeeze all that piggybacked on to a strong pro-life stance into 33 minutes.  Perhaps a longer version, even another 15 minutes, would have remedied this for me.

Aside from the “rushed” feeling, this documentary is timely and spot on.  And with abortion continuing to be a hot-button topic, it could not have come at a better time. 4 out of 5 stars.

If you like this film, be sure to check out this sermon entitled, “The Auschwitz Within” from Eric Ludy.  SEE SERMON HERE.