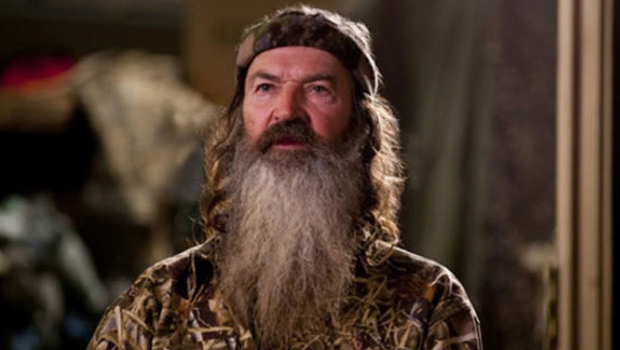 As the internet lit up with talk of A&E’s decision to remove Phil Robertson, the patriarch of Duck Dynasty (the number one show in the history of TV), it didn’t take but a blink of an eye to see the surge in colorful conversations on the matter.  Knee-jerk remarks invoked the 1st Amendment from some and cries of the intolerance of tolerance from the others to Christians claiming the truth of Scripture to homosexual organizations such as GLAAD crying hate and bigotry, this controversy has it all!  And for the previously mentioned reasons, it stinks, thus the title of this article.

The Apostle Paul made the same arguments, but worshipers in the congregations of Rome and Corinth did not have to put hands over the ears of their children when Paul’s letter was read to their church. – Albert Mohler

There is so much that could be said.  Yet in the mix of the news media’s banter and Christians crying discrimination (how ever true it is), from a Gospel-thinking Christian, what should be said?  What is it that needs to be realized out of this whole dust up?  What can we learn by it?  In this piece, I will focus on what went wrong.  In the coming days, I will finish this by explaining how we got here and where we go.  Hang on…

Granted, we are called to go preach the Gospel of Christ to all the world (Matthew 28:19).  However, as Christians, we must discern the as best we can with our fallible minds where and when those opportunities may be.   That is probably the most obvious thing being overlooked right off the bat.  Someone with Phil Robertson’s fame can go pretty much anywhere they want to talk Bible.  Money and other obstacles for most of us are of no hindrance to him.  Yet, he chose GQ Magazine.  A magazine that regularly takes the Lord’s name in vain and is out for the next feather-ruffling story is probably not the best venue.  Their goal is to get the exact response we are now seeing in the media.

Additionally, though he did faithfully and accurately paraphrase 1 Corinthians 6:9-11, he could have left out the anatomical references when speaking to the acts of homosexuality vs. heterosexuality.  As Dr. Albert Mohler points out on his blog,

“The Apostle Paul made the same arguments, but worshipers in the congregations of Rome and Corinth did not have to put hands over the ears of their children when Paul’s letter was read to their church.”

It’s been said that though God made man in His image (Genesis 1:27), man has been trying to return the favor ever since.  Any time you touch on the doctrine of man, you are venturing down the road of Scripture that forces man to face who he is in his depravity (Ephesians 2:1-3) and in doing so, you awaken a beast that lies within the unconverted person…

That beast will arise when it is antagonized with truths of Scripture show it’s actions to be foolish (1 Corinthians 1:18).

That beast lashes out, swinging violently to whatever it’s claws may rip into as the darkness cloaks its senses to the truth of God’s word (2 Corinthians 4:4).

One point that Christians need to consider is that this is not a 1st Amendment issue.  The government  is not prosecuting Robertson or the Duck Commander family for that matter.  The 1st Amendment does not guarantee us a TV show.  Before you start flaming our comments section, consider the following scenario:

Let’s flip the script for a minute. Let’s say there’s some show on a Christian network. Then one day, one of the stars for the show decides to tell a Rolling Stone interviewer that he’s under grace and thinks it’s ok to smoke a joint here and there and get drunk once and a while. And in that capacity, he’s only slept around on his wife a couple times, but it’s not big deal if he gets the urge again. Now, would the show be wrong in removing him since he is blatantly promoting ideas that are in opposition of Christian values? Absolutely not! Yet, it’s the same here for Phil.  The A&E network is a HUGE supporter of GLAAD and the homosexual movement. Thus, leading to the conundrum we see.Again, like it or not, the Duck Commander group works for A&E and are limited to their desires and agenda. Their views and the truth of Scripture finally collided. My question is, “Why did it take this long?”

From Bad to Worse in a Hurry

There has been chatter that Mormon Glen Beck’s network The Blaze has offered a home to the Duck Commander family. That would be the WORST thing they could do. It would only give credence to Mormonism’s misguided claim of being “Christian” and further blur the line that many folks are unaware of. Many Christians don’t even bat an eye when they hear a Mormon pray “in jesus’ name”. Yet if they understood Mormonism they would know that their “jesus” is nothing close to who the Jesus of the Bible is. This could go from bad to worse in a hurry.

I’ve learned the hard way that when you take the wrong approach to conveying God’s truths and apply it to the lost, you are playing with a powder keg that will blow up in your face at any minute with eternal implications.  Every news channel in America is confirming that statement right now.

We must remember the God we serve. If the God of the Bible is silenced because a degenerate TV network says so, we serve a small God.