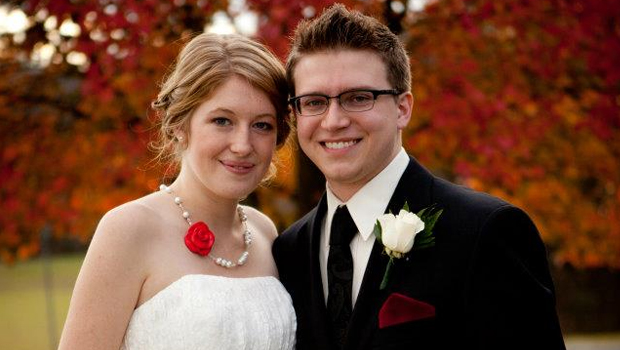 This post could have easily been titled, “From 0 to Calvin in 6 Seconds” as we see God using a man’s future wife to pull of the blinders and awaken the truths of scripture.  Enjoy this brilliant piece by a guest contributor!

This post originally appeared on The Recovering Pharisee blog, authored by our friend and brother in Christ, Seth Campbell.

It was all my girlfriend’s fault.

The year was 2008.  I was in college reading Rob Bell’s Velvet Elvis.  I had to read excerpts for a class and so I decided to pick up the book and read it in it’s entirety.  I was encountering a lot of interesting things that I discussed on a regular basis with my, then, girlfriend.  One fateful day, in one of our phone conversations, she asked a seemingly simple question.  She asked,

“Isn’t he a pastor somewhere?”

“I listen to his sermons sometimes!” she exclaimed.

“I think.  I used to listen to a pastor online and I know the name of his church was Mars Hill.”

“I will too.  I know that he reminded me of you,” she said with a laugh.  “Here!  I’m on his website.  His name is Mark Driscoll.  It doesn’t say anything about Rob Bell on here though.”

[I’m sure you’re chuckling by now, but back in ’08, these weren’t the widely popular names they are today.]

The subject changed and we got off the phone not long after.  That’s when I made the fateful Wikipedia click that would change my life forever.

I was raised in a Pentecostal / charismatic denomination.  From the 2nd grade to college, that was all I ever knew, understood, or cared to believe.  Youth group.  Church camp.  Everything was saturated in Pentecostal theology.  I even went to a small, liberal arts college that was sponsored by the Pentecostal denomination I belonged to.  One of the unique things about that school is that it is “Theologically Distinct” yet “Denominationally Diverse” (from their website).  This means that they accept students from many Christian faith traditions, but they approach everything from the Pentecostal distinctives they were founded upon.  For example, it is a requirement for all employees to already be or be willing to become a member of a church in this particular denomination.  (I say this not to bash, but to set the stage for the story.)

While I was in attendance, one of the required courses for all majors was a semester class on this particular denomination’s “Doctrine and History.”  The purpose of this class was to trace the history of the Pentecostal movement in the United States back to the Reformation.  So that’s what my professor did (and he did it quite well actually!).  The interesting part of the story occurred when we started discussing the Protestant Reformation, the English Reformation, and the rise of Wesleyanism.  As I sat in that class, I was a sponge soaking up all the new facts I could considering that 99.9% of what he was teaching me was new information.  What can I say?  I went to public school.  I’ll never forget the day my professor introduced us to this crazy guy named John Calvin.  He talked about the basic tenets of “Calvinism” and contrasted them with the basic tenets of “Wesleyanism” (or Arminianism as he would sometimes say) and it was clear which position he took.  There was no attempt to hide his bias.  This caused a few days of in-class debate, but I remember sitting back wondering what everyone was so riled up about.  I was a Pentecostal which was a branch off the Holiness movement which was a branch off Wesleyan Methodism, so my mind was made up.  Calvinists were wrong.  At the end of those few days, my professor polled the class asking which side we “leaned” toward.  When he asked who leaned towards Calvinism, only one lonely and brave man raised his hand.  I will never forget how he was ostracized.  It was bad news bears coming out Calvinist!  Especially on a Pentecostal campus!

“Here!  I’m on his website.  His name is Mark Driscoll.  It doesn’t say anything about Rob Bell on here though.”

The subject changed and we got off the phone not long after.  That’s when I did some digging on Wikipedia.

[I read the bio box on the right to myself]

“Residence: Seattle, Washington.  Well, he and Rob Bell can’t be at the same church cause’ Rob’s is in Michigan.

Tradition or Movement: Reformed, Evangelical.  Reformed?  Wonder what that means…”

The big black letters stood at the top of that Wikipedia page unconquered like the boss youthought you beat on the previous level.  Strong.  Tall.  Unbeaten.  Begging to be dealt with.  Asking for a fight.

What was my girlfriend into?!  I had to warn her about this guy and tell her to warn whoever told her!  This was serious stuff!  She couldn’t answer the phone fast enough.

“Hey. Did you know Mark Driscoll is a Calvinist?!”

“How can you not know what that means?!” I asked irrationally, having only learned a few months before.

“I dunno.  I’ve listened to quite a few of his sermons and I really liked them.  You should just calm down and listen to some and see what you think.”

I found the church’s website and did more digging.  At that time, Mark was preaching through his “Religion Saves…” series and so I hesitantly went and clicked on the most non-confrontational sermon I could find.  “Grace.”  In the message, he talked about how the hardest part of Christianity for him to believe was grace.  He couldn’t fathom how good and loving and kind and generous and gracious God had been to him in light of all the evil and wicked things he had done.  This was the part of Christianity that always blew him away.  And as he was talking, I started agreeing with him.  And as he was preaching, I saw that he doing so from the Bible.  But this guy was a Calvinist and Calvinists are…are…wrong.  But I agreed with him!  That was a watershed moment for me because from that time on, no belief outside of the Apostles’, Nicene, andChalcedonian Creeds were safe.  They were fair game.   They were open to scrutiny and questioning.  And it had to start with this whole “Calvinism” thing.  I had to figure out what Ithought.

I knew Calvinism had it’s roots in the Protestant Reformation, so I found myself in the library as often as I could, mostly at night, reading everything I could get my hands on about the Reformation.  I finally starting reading some of Martin Luther’s own works.  After that, I knew my church history well enough to know that after Luther and before Wesley came the Puritans.  So I read everything I could find on the Puritans.  And then I started reading some of John Owen’s works.  I can’t say that during all this reading I was convinced, but I wasn’t unconvinced.  The final persuasion came from…you guessed it…my girlfriend.

It was a year or two later and I was still wrestling with all of this.  Up until this point, I was doing so in silence.  One random evening (and for the first time since that conversation about Mark Driscoll and Rob Bell) my girlfriend and I actually ended up talking specifics about this whole Calvinism mess.  I laid out the arguments and presented both sides arbitrarily.  Before I was finished and without even hesitating she said, “Then I’m a Calvinist.”  I was floored.  Until then, I had just assumed that she was an innocent bystander caught in the crossfire.  She didn’t really know what she thought about all of this.  She didn’t have a dog in this fight.  “How can you be a Calvinist?!” I shouted.  “I dunno.  That’s what the Bible teaches,” she said with a wry smile.  I disagreed, loudly, and remained still unconvinced for another few months.  But in the end, I was forced to admit that she was right.

It’s been an interesting journey from there to here with many different caveats I’ll share at different times in the future.  But I can say with complete assurance and certainty that I would not be the person I am today if not for that girlfriend I had back then.  Just as an example, I write to you today as a happily Reformed Evangelical Presbyterian.