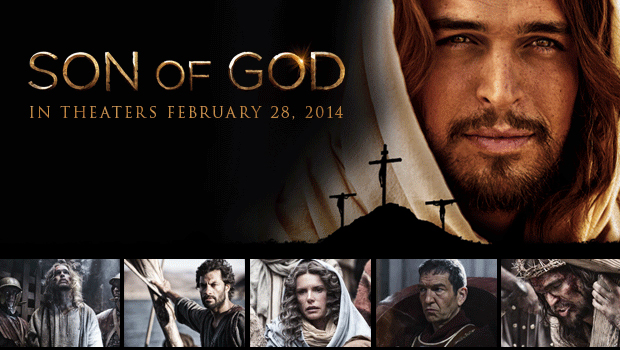 Due to laziness in the pulpit and complacency in the pew, movie events just like this can actually have the opposite effect that many well-intended Christians hope for.

Unbelievers and believers in Christ alike no doubt will be flocking to the new film ‘Son of God’.  I know many will accuse me of being too picky and unnecessarily causing a stir.  However, I believe due to laziness in the pulpit and complacency in the pew, movie events just like this can actually have the opposite effect that many well-intended Christians hope for.

***DISCLAIMER*** – Christians should practice Romans 14 among themselves and not judge others who choose to see this film.

For proof, one needs to look no further than February 25, 2004.  It was then than award-winning actor and film maker Mel Gibson released his rendition of the last hours of Christ known as “The Passion of the Christ“.  Church after church (like the one I was attending at the time) poured out hundreds and thousands of dollars to rent theaters for the congregations.  The hope was that their members would bring other non-believers and show them the movie.  Afterwards, there was a brief speech made, pastors and minsters alike then led the emotionally-saturated non-believer through the unbiblical, “sinner’s prayer” (see one explanation of it’s nonsense here and at end of this aritcle).  The person was then told they were saved, have eternal life, invited to church, and out the door they went.

There are many issues with this approach to evangelism.

It’s no doubt Hollywood’s movie magic can take us on an emotional roller coaster. From the first 7 minutes of Disney’s “Up” to the heart-pounding final battle scene in Marvel’s “The Avengers”, the level of effectiveness of a movie to invoke our emotions is directly related to its success at the box office.  Movies are powerful indeed.  However, Hollywood pales in comparison when it’s make-believe manipulation is compared with the awe-inspiring, regenerating power of the Gospel of Christ.

None of that can be found when you are knowingly or unknowingly relying on power other than the Gospel to see lost people come into a relationship with Christ.

We trade our Bible for a movie stub

Like the title implies, we effectively trade our Bible for a movie stub.  Not only does any movie not have the power to save anyone, it has nothing to do with the clear instructions God gave us to fulfill the Great Commission (Matthew 28:19-20)!  Consider what God has told us about how to see the lost saved…

So faith comes from hearing, and hearing through the word of Christ.

How do we come to faith in Christ?  By hearing.  Hearing what? The word of Christ!  Dear friend, it does not say, “…faith comes from seeing a movie that get’s you all emotionally whipped into a frenzy and then repeating some magical prayer…”  No, rather, “…by the word of Christ.”

This is no different than churches today who emotionally manipulate their congregation into tears with the right selection of songs and setting of lights to get them to an altar.  For example, many unbelievers who saw The Passion of the Christ were emotionally wrecked after the movie.  At that vulnerable moment, rather than confronting them with the Gospel and explaining why some seemingly nice guy just got the snot beat out of him and ultimately killed, they’re led through some senseless, incantation.  They have no idea why the cross was necessary because they still think they are a “good person”.  There’s no sense of repentance or genuine belief.  Why? -Because they were never shown it through the lens of the Gospel!

Now, that person walks out of the theater with a false sense of security, assured by some pastor that they have eternal life because they repeated a 30-second prayer.  That person goes out, all goes well for about 3 months or so, and BOOM! they’re right back in the sin they were living in.  Or, they try to live right and do all the Christian things like being nice, going to church, etc.  albeit under their own power because they think they have to earn their way.  Now when that person experiences the first bit of hardship (divorce, loss of job, loss of child, death of spouse, etc.) they walk away from the faith they never really  had in the first place.

Fast-forward a little down the road and when they are confronted with the Gospel and the danger they are in outside of Christ, they usually reply, “I done tried Jesus, didn’t really work…”  They are now callused over and twice as hard to reach and win over to the Lord.  Why? Because a Christian somewhere traded their Bible for a movie stub and the Gospel’s saving power for their own instant gratification of success and led this lost soul further into the abyss of their potential, eternal tragedy.

Dear Christian, it’s my prayer that you leave the emotional manipulation to Hollywood.  Rather speak the Word, tell the Good News, and see the potent, emotional reaction of brokenness and hopeless without a Savior become a reality in the lost.  Then when their hearts of stone are crushed by the weight of the Gospel, usher in their new heart of flesh with the reality of the Cross and the atonement made by the spotless, perfect Lamb of God, Christ Jesus!

THAT is an ending not even the best in Hollywood could write!

A Biblical Alternative to the Sinner’s Prayer